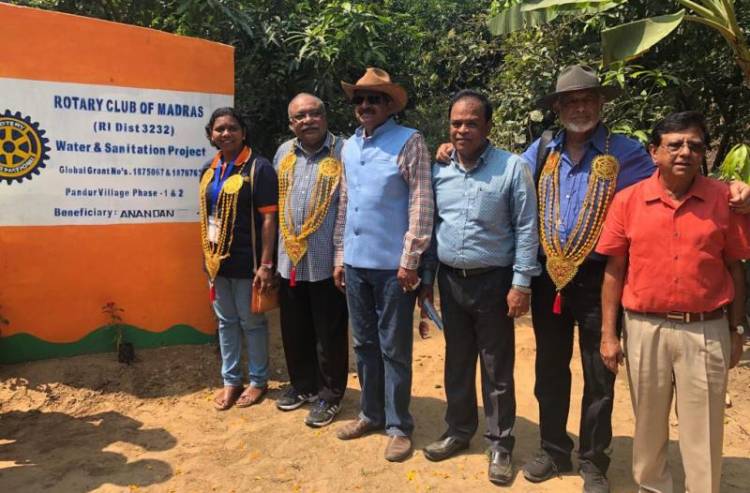 3 Villages in TN namely Pandur (Kanchipuram District), Kannan Kotai & Thandiyar Kandigai (Thiruvallur District) have becomes ODF because of the initattive taken by the Rotary Club of Madras under its Water and Sanitation project. So far, RCM has built 223 toilets at Pandur, 321 toilets at Kannan Kotai & Thandiyar Kadigai Hamlet Thiruvallur, in association with Global partners and with Global grants. The project has been completed in record time and a function was organised at Pandur village for the handing over of the built in toilets to the beneficiaries. It was held on 17th Feb Sunday which was attended by Rotarians from our global partner clubs as well as our own Rotarians and District Officials numbering more than 100.

President Ranjit Pratap, Rtn S. Ravi , Members from clubs abroad, Canada, USA, Malaysia and Srilanka and local panchayat leaders were  present at the handover ceremony. In his address Ranjit Pratap said we have this year built 544 toilets and in and around Chennai. So far we have constructed 1058 toilets in 10 villages making them all ODF. The amount spent  is over Rs.2.25 crore . Rotary International, District 3232 and clubs from different parts of the world have contributed in making this possible.

Rtn S.Ravi Director Community Service RCM said that the club has created a record by building 1058 toilets in villages, which did not have a single toilet . Along with this we have invested in programs that impact the villagers and bring about an attitude change that  ensures that the toilets are used properly. The success rate is around 98% . We hope to build over 5000 toilets in different Villages in the next 2 years.

Bengaluru, the informal “IT & Tech Capital” of India, has in the last decade received...

Japan Prime Minister Shinzo Abe on Monday said he was deeply touched by the warm...