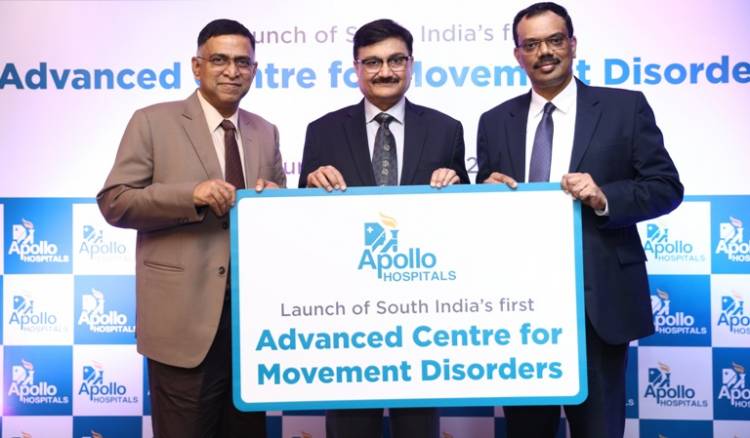 The comprehensive centre will offer 360° care with the most advanced forms of medical and surgical treatment and ancillary services to patients afflicted with various movement disorders including Parkinson’s diseases. Prevalence of Parkinson’s disease in India is around 300-400 out of 100,000, which is expected to multiply by 2030. Parkinson's disease is a chronic disabling neurological condition affecting people who are 60 years and above.  When 80% of cell loss occurs in brain, the first symptoms of Parkinson's disease appear. Usually Parkinson's disease is manifested by tremors affecting initially one side of the body and later on both sides of the body, slowness in movement, change in handwriting, alteration in voice, get and balance disturbances and rigidity.

Speaking to media during the launch Dr. Paresh k Doshi, Group Advisor, Functional Neurosurgery, Apollo Hospitals said, “Awareness on Parkinson’s disease is high in Tamil Nadu but, the knowledge on importance of ‘multi-disciplinary’ care has not reached the people. A person with Parkinson’s disease cannot be treated or cured completely by visiting a Neurologist alone; he/she would require a complete and comprehensive treatment to recover completely. Deep brain Stimulation is one such advanced treatment for patients with severe movement disorders.”

DBS is the advanced treatment option available for Parkinson’s disease with motor fluctuations and side effects from medicine. USA FDA has approved this now to be offered early in the disease progression rather than waiting till the end. This has enabled to not only improve the quality of life but also regain dignity and self-esteem of the patient. DBS involves placing of an electrode in the Sub Thalamic Nucleas, which is adjacent to Thalamus, an important relay station of the brain. The electrode sends continuous electronic pulses through a battery, which is attached in the chest wall and can be externally controlled through a remote control.

There is no definitive preventive strategy for Parkinson’s disease. Healthy life style and early diagnosis are helpful in disability limitation and care planning. There are reports from large epidemiological studies suggest that a few life style factors provide protection against the disease. However, these are not recommended for prevention of Parkinson’s disease.

A benchmark index of Indian equities markets hit a record high of 27,061.40 points...

In a first-of-its-kind, Tamil Nadu will now have women paramedical members weaving...

Rupee down 10 paise against dollar in early trade

The rupee weakened by 10 paise to 61.60 against the dollar in early trade on Tuesday...