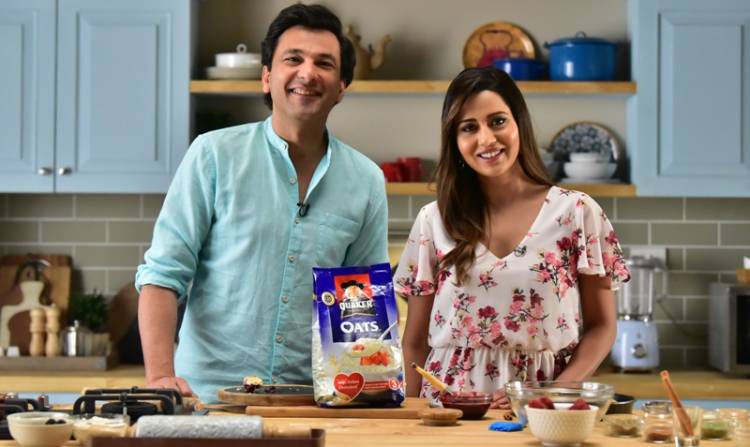 * “I think the idea of carrying an oats smoothie with me is great as a quick and easy option even in the middle of a shoot”: Vicky Kaushal

* “Breakfast is one of my favourite meals…. I have big appetite”: Bhumi Pednekar

* “I always used to get shouted at in the kitchen”: Raiza Wilson

The series features entertaining banter between the young stars and the celebrity Chef as they jam up to cook exciting recipes made nutritious by adding Quaker Oats. Each recipe has been crafted by Chef Vikas Khanna to demonstrate tasty yet convenient and nutritious options that are perfect for youth to adopt to complement their rushed lifestyle.

Speaking about the video series, Chef Vikas Khanna said, “Sharing the kitchen with Vicky, Bhumi and Raiza was truly a fun way to know more about today’s youth icons and how they view everyday nutrition. It always amazes people to know how versatile Quaker oats are, and how easy it is to add it to any recipe to get a boost of protein, fibre and energy. I always find a host of ways to add Quaker oats to my cooking – be it in the form of oats milk made in the blender, or as a healthy dose of wholegrain in easy-to-do granola bars.”

In the episode with Vicky Kaushal, Chef Vikas Khanna turns a humble smoothie into a gourmet delight, all with a healthy Quaker oats base. Speaking about his experience on the show, Vicky Kaushal said,“The idea of carrying an oats smoothie with me is great as it is a quick and easy option even in the middle of a shoot. I think I would like to make this for my mother because she would always wish she had a daughter who could at least make tea for her.”

From a fruity smoothie to granola barsanda contemporary version of the NanKhatai, the web-series features fun recipes made nutritious with Quaker Oats, and whipped up in Chef Vikas Khanna’s inimitable style.

Sharing her enthusiasm for being on the show, Bhumi Pednekar said, “Breakfast is one of my most favourite meals. We made oats granola bars on the show, and Chef Vikas makes it all so simple and easy to follow, so I am so excited to try making them myself. It’s a super convenient option to take on-the-go.”

Raiza Wilson made Quaker Oats Nan Khatai with a mixed berry jam filling. Sharing her experience of cooking alongside the chef, she said, “I always used to get shouted at in the kitchen at home, so it was really my first time helping in the kitchen. Chef Vikas made the simple nan khatai into an exotic dish, and I was amazed to learn how easy it is to use Quaker oats in anything we cook.”

Nobel Dhingra, Associate Director – Marketing (Quaker), PepsiCo India,added: “We are delighted that Kitchen, Khanna & Konversations has connected with our young audience. We understand that young people are increasingly focused on their nutrition intake, but they also tell us that they don’t want to compromise on taste. Our objective with thisweb-series is to help young people understandhow easily they can opt to increase the nutrition quotient of their favorite dishes by adding Quaker Oats. Not only are oats easy to incorporate in whatever your preferred choice of breakfast may be, they also help provide much-needed benefits of wholegrain, protein and energy to get you going.”

Australia to cull up to 10,000 camels amid bushfires

At least 10,000 camels will be killed in drought-hit Australia in a bid to relieve...