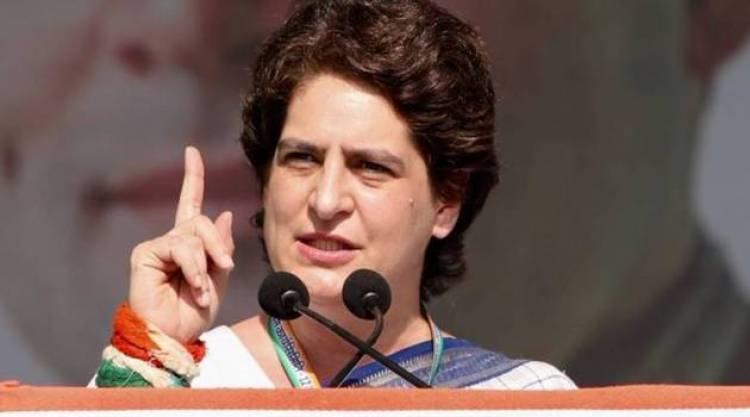 AYODHYA: Congress General Secretary Priyanka Gandhi Vadra on Friday took a pot shot at Prime Minister Narendra Modi saying when he does not know anything about villages in his Varanasi Lok Sabha constituency how will he develop them.

Priyanka Gandhi said this as she huddled with a group of women under a scorching sun in Uttar Pradesh's Atka village here.

Launching a blistering attack on Modi two days after his Mission Shakti, Gandhi said, "If you cannot listen to the voice of your people, then what kind of power do you have?"

She also did not spare BJP President Amit Shah and called the saffron party's 2014 promise of giving Rs 15 lakh to every citizen as "rhetoric".

The Congress leader said that the BJP and its leaders stay away from villages and keep on lying.

This is the second time in her three-day tour of the state that the Congress' eastern in-charge of the state has brought up the Prime Minister and his work.

On Thursday, interacting with party workers in her mother Sonia Gandhi's constituency in Rae Bareli, she had surprised the cadres when responding to a query about contesting from her mother's safe seat, Priyanka Gandhi said "Why not Varanasi?"

"He only meets and greets the rich," she added to loud applause.

Priyanka Gandhi said it was the Congress which had brought the people-friendly schemes like MGNREGA to give employment to people across the country.

"When they were in opposition, they opposed the MGNREGA, but as soon as they came to power they realised how good the scheme was," she said.

"These projects have now gone into the hands of contractors," she alleged, adding that now the people enrolled are not getting money for over six months. "Actually, they want to close this scheme."

"This government wants to snatch the poor people's employment. But the Congress through NYAY (Nyuntam Aay Yojna) scheme will give Rs 72,000 per poor family," she said speaking about the party's fresh attempt to cater to the impoverished voters.

Attacking the Bharatiya Janata Party (BJP), Gandhi said: "When we announced NYAY, BJP said that this is bluff and the government does not have money."

She questioned how then was the BJP working for the industrialists. She accused the BJP government of waiving loans of industrialists but not doing the same for the farmers.

Earlier in the day when she was on her way from Rae Bareli to Faizabad, Gandhi halted at several places. She met women workers and also paid obseisance at Materva Mazaar in Amethi.

The 47-year-old became nostalgic when a Muslim family reminded her of her grandmother and former Prime Minister Indira Gandhi's visit to the village in the 1980s.

They showed her the photographs of their family with Indira Gandhi. As she was being photographed some four decades later, Priyanka wanted to keep her grandmother's picture. An old man said: "Go ahead, we have a copy."

Comparing her party's politics with that of the BJP, Gandhi said: "Their politics is of lie and publicity. It won't work anymore."

She also said that her brother and Congress President Rahul Gandhi had spoken about the rights of the farmers. She reminded them that Rahul had even gone to Bhata Parsaul to fight for their rights.

During the day, Priyanka Gandhi will also hold a road show in the temple town of Ayodhya.

Before concluding her three-day poll campaign, she will pray at Hanumangarhi temple.

After restrictions by Reserve Bank of India(RBI) on Yes Bank created a painc situation...

Radio One 94.3 launches an exclusive One Hour segment in...

Radio One, a popular FM station in Tamil Nadu has launched an exclusive show with...

UNICEF is actively taking steps to provide accurate information about the virus...

#TrueAdventure is back in a New Avatar 2019 Honda Africa...