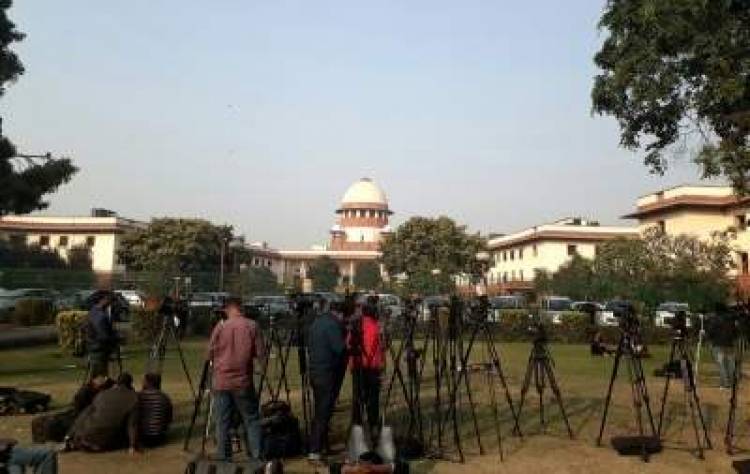 SC orders status quo on Karnataka rebel MLAs issue till Tuesday
New Delhi, July 12 The Supreme Court on Friday ordered status quo with regard to the plea of the 10 Congress MLAs of Karnataka who approached it against the Assembly Speaker for not accepting their resignations.
After high-decibel arguments between advocates of the rebel legislators and the Speaker, a bench, headed by Chief Justice Ranjan Gogoi, said the matter required a detailed hearing and listed it for Tuesday (July 16).
Till then, there would be status quo on the issue, the bench ruled.
"Various issues of interpretation of the constitutional provisions arise in this case...Question of judicial interference also comes up. It also needs to be examined if the Speaker needs to decide disqualification (of the rebel MLAs) first," the court said.
During the course of the hearing, a high-decibel argument broke out in the courtroom.
Appearing for the rebel MLAs, senior advocate Mukul Rohatgi said the Speaker could be given a day or two to decide, but he couldn''t challenge the authority of the apex court.
He contended that the top court should issue a contempt notice against the Speaker, as he was deliberately delaying the decision on the resignation of the MLAs despite its order.
The court yesterday asked the Speaker to take a decision on issue of resignations within a day.
The Chief Justice asked the counsels: "Is the Speaker challenging the authority of this court? ...and is the Speaker saying Supreme Court should keep its hands off?"
To this, senior advocate A.M. Singhvi, appearing for the Karnataka Speaker, replied, "No.. He isn''t saying that."
Singhvi submitted before the court that the Speaker is a very senior member of the Assembly and he will decide on the disqualification first, as he is duty-bound.
"The Speaker cannot be maligned and lampooned like this. He is a senior member and knows the Constitutional law," contended Singhvi.
He also told the court that MLAs did not try to meet him earlier, and this information was not presented before the court.
Rohatgi said the Speaker had earlier accepted resignation of one MLA even though disqualification proceedings were pending.
Senior advocate Rajeev Dhavan, appearing for Karnataka Chief Minister H.D. Kumaraswamy, described the plea filed by the MLAs as "an overtly political petition" and denied the allegations made against the CM in the petition by the MLAs.A
Dhavan asked what exactly the MLAs wanted the court to do?
"They claim that the government has failed, and now, they want it fail to further. They have simply dragged the top court into this political battle," he said.

VELAMMAL STUDENTS ON A FIELD TRIP

Pakistan claimed on Wednesday that it has captured two Indian pilots, one of whom...

Louis is the inventor of Braille, a written language for blind people.