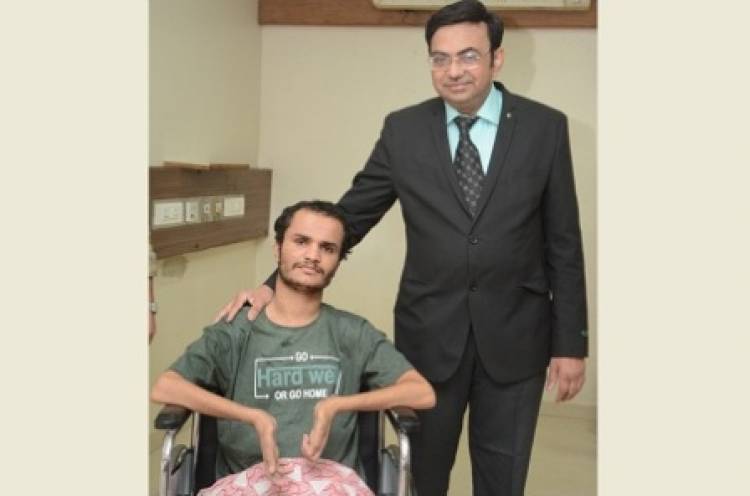 A team of four doctors from Pune, led by renowned orthopaedic Dr.  Anant Bagul successfully executed one of the rarest surgery. A surgical procedure was performed on 22-year-old Yemen national Mansoor Mohammad Hussain– who was injured due to bullet shot which hit him in his neck while he was serving the Yemenese army in the ongoing civil war. The impact of bullet was such that it paralysed his entire body majorly impacting the upper side of it. Mansoor who was shoot six months back was referred to Dr. Bagul. Mansoor, whose health was in a very bad state six months back, has shown excellent improvement in sensation and muscle power.

In the first of two operations conducted on Mansoor, surgeons removed patient's mesenchymal stem cells from bone marrow and they transplanted the stem cells and growth factors harvested impregnated on a scaffold graft into the spinal cord defect, which had been cut through in gunshot bullet injury . They had just a few drops of material to work with - about 500,000 cells. The doctors believe the stem cells provided a pathway to enable fibres above and below the injury to reconnect, using the nerve grafts to bridge the gap in the cord. The team led by Dr. Anant Bagul was more than ably supported by Dr. Anand Katkar, Dr Shrinivas Shintre, Dr. Sachin Kaushik, Dr. Dipak Poman and Dr. Manoj Bansode respectively.

Dr. Bagul, Consultant Orthopaedic surgeon at Universal Hospital, who led the team of doctors during surgery, said, “It's amazing to see how regeneration of the spinal cord can save lives. This is something that was never thought off and was impossible for many years. I would like to thanks my team who really worked hard round the clock and gave all their best in such a critical surgery. I would also like to thank the patient Mansoor Mohammad Hussain who showed tremendous amount of patience and will power which helped us achieves successful execution of one of the most unique operations in India.”

Speaking about the post-surgery results in detail he said, “The patient is showing excellent recovery and since surgery has regained muscle mass, sensations and movement mostly on both upper and lower limbs. This is the evidence that the recovery is due to regeneration, as signals from the brain controlling muscles travel down through the spinal cord. Post the surgery MRI scans suggest that the gap in the cord has closed up following the treatment.

He further added, “This has given us  a huge boost and I am confident that in future our team at the Universal Hospital would be prepared to consider patients from anywhere in the world who are suitable for this kind of a therapy. They are likely to have had an injury where the spinal cord has been cleanly severed.”

Indias racing team head to Japan for Round 3 of Asia Road...

: Taking Indian riders to an international racing platform, the first ever India...

East Asia Summit on Maritime Cooperation to be held in...

The Ministry of External Affairs is to organize East Asia Summit in Chennai between...