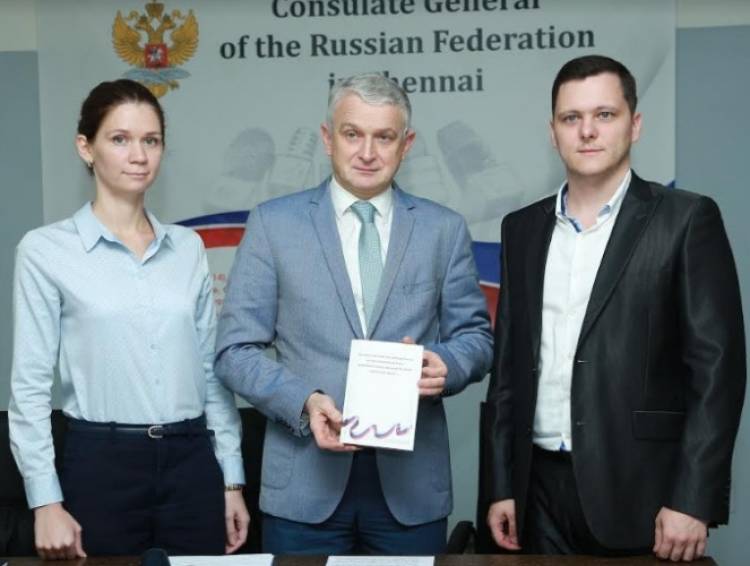 Chennai, 27 Dec 2018: “Russia is emerging a..s an attractive destination for Indian tourists. This year wonderful historical and natural heritage of our country attracted more than 4000 travelers from South India (4433 tourists visa issued). Russian Consulate along with the Russian Visa Center are ready to provide in Chennai visa services for the residents of South Indian states. It is important that the partnership with South Indian states has always played a significant role for Indo-Russian strategic cooperation,” said Mr. Oleg N. Avdeev, Consul General of the Russian Federation in Chennai, while presenting the report on Russia’s cooperation with India, particularly South India, during the year 2018.

“Educational exchanges are another valuable asset for both our countries. The number of students from South India going for a higher study in Russia is prominent - this year 973 students visa were issued. In the current year Russian Educational Fair took place twice (May and June) in Chennai and also in Madurai, Coimbatore, Hyderabad and Trivandrum. The most popular major for Indian students going to Russia for education is medicine. We are keen to boost our cooperation with Indian educational institutions in spheres of technology, engineering and nuclear energy. After finishing these programs graduates may have an opportunity to work at joint Indo-Russian ventures,” added Mr. Oleg N. Avdeev on Russia as a destination for Tourism and Education.

The year 2018 was primarily marked by a range of contacts between our leaders. Mr Vladimir Putin, President of the Russian Federation, and Mr Narendra Modi, Prime Minister of the Republic of India, met in New Delhi on October 4-5 for the 19th annual bilateral summit where India and Russia sealed the USD 5 billion S-400 air defence system deal and signed eight pacts in areas ranging from defence and nuclear energy to space and economy. Mr Putin and Mr Modi also held an informal summit in the Russian city of Sochi on May 21 and discussed bilateral issues on the sidelines of the 10th BRICS summit in South Africa in July.

Other spheres of bilateral relationship:

One of the most vital Indo-Russian projects in South India, is Kudankulam Nuclear Power Plant, which is already producing electricity and expanding. Units 1 and 2 are working on generation capacity – 1,000 MW of power. The construction work of Units 3 and 4 is underway. Setting up of units 5 and 6 in Kudankulam will start in the near future. This project is in line with the intentions of our leaders to build up energy cooperation.

Last year mutual trade between Russia and India grew by 21% to over 9.3 billion USD from 7.7 billion USD in 2016 and during the first 7 months of this year it has already increased by 20%. Moreover, a plan has been set to increase trade to 30 billion USD and the volume of mutual investment to 15 billion USD by 2025.

Vast business partnership opportunities with South Indian region were explored while the delegation from Tatarstan led by the President of the Republic of Tatarstan Mr Rustam Minnikhanov visited Andhra Pradesh and Telangana last April.

The exhibition of land, naval & internal homeland security DEFEXPO India 2018 which took place in April in Chennai was a significant step towards strengthening our bilateral defence cooperation. Under the guidance of the Rostech corporation 50 Russian companies presented their products at this exhibition.

This December bilateral Russian-Indian naval exercise Indra Navy-2018 was completed in Vishakhapatnam (the Harbour Phase – 9-12 December, The Sea Phase – 13-16 December). Russia sent here the Pacific Fleet’s flagship, the Varyag missile cruiser, the large antisubmarine ship Admiral Panteleyev, and the large sea tanker Boris Butoma. The Indian Navy was represented by the Ranvir guided missile destroyer, the Kadmatt, Kuthar and Khanjar corvettes, and the Jyoti tanker. Over 10 warships and support vessels from both countries, planes and helicopters of the Indian Navy and a helicopter from the Admiral Panteleyev took part in the exercise.

Our ties with South India in the sphere of culture and education have been growing as well. Through diverse activities of the Russian Cultural Centres in Chennai and Trivandrum Indian people had the chance to learn more about Russia’s history, literature, arts and traditions. During this year several art groups visited Tamil Nadu and Kerala and gave wonderful performances in the Russian Centres of Science and Culture in Chennai and Trivandrum. The most recent cultural event was a musical performance of Dokshitzer New Life Brass Band from Moscow which took place in Narada Gana Sabha in November.

The ceremony of bestowing the Order of Friendship on Chess World Champion Mr. Vishwanathan Anand who started his chess carrier in the Russian Centre for Science and Culture was held in Chennai on September 10, 2018. The award was conferred on Mr.Anand in accordance with the Executive Order of the President of the Russian Federation for great contribution to strengthening peace and bilateral friendship, development of economic, scientific and cultural ties with Russia.

One of the landmark events for Russia was hosting the FIFA World Cup 2018. Many Indian nationals visited our country to attend this outstanding event. We are interested in developing sports contacts between our countries and are looking forward for more events in this field.

“Summing up, the closing year of 2018 was quite eventful and productive in further strengthening special and privileged strategic partnership between the Russian Federation and the Republic of India. Russia’s cooperation with India during this year was based on mutual trust, common priorities and convergence of views on all major foreign policy issues,” said Mr. Oleg N. Avdeev and concluded “Generally speaking, India and Russia have much in common. Our countries share common desire for peace and tranquility, our main goals are modernization and social progress. We strive to further explore the enormous potential of bilateral cooperation for the benefit of the peoples of India and Russia and the global community as well.”

The Election Commission in poll-bound Tamil Nadu has strengthened the number of...

Jammu and Kashmir MLAs to be sworn in on Tuesday

Legislators of the Jammu and Kashmir legislative assembly will be sworn...

Celebrate the magic of China?s biggest Spring Festival and the year of the Horse...