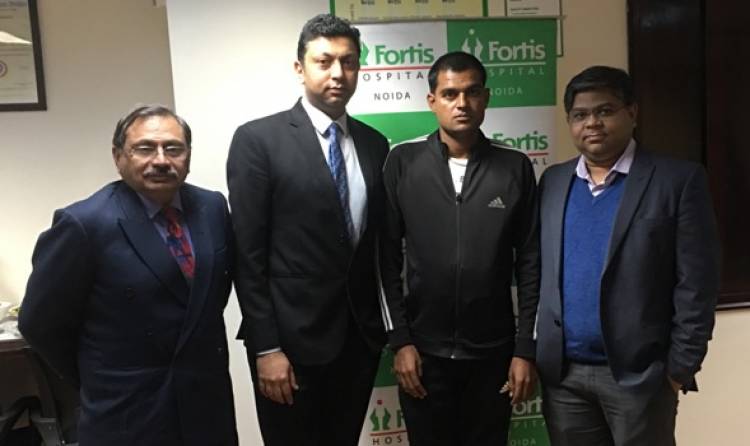 Chennai: Doctors at Fortis Hospital Noida came across a shocking case where a road accident victim had been so badly injured that his lungs had protruded out of his chest. The doctors were able to administer surgical intervention and save the patient, giving him a second chance at life. The patient, Mr. Yogendra Kumar, was travelling to work when a vehicle hit him. He was initially taken to a nearby hospital which refused to handle the critical case. He was then rushed to Fortis Hospital Noida where his treatment was handled by Dr.Vaibhav Mishra, Additional Director and Head, Department of Cardio Thoracic and Vascular Surgery, Fortis Hospital, Noida and his team.

Mr.Yogendra was hit by a vehicle and flung 20 feet into the air. He landed on a tin sheet on the left side of his chest. This caused his chest to divide into two parts causing a large open exposing complete left defect which resulted in his left lung coming out. He also fractured multiple ribs on the same side and there was a large laceration on his left lung. Initially he was taken to a nearby hospital however they were unable to treat him effectively. He was presented to Fortis Hospital, Noida after 10 hours. By this time his condition was grave. His lung was exposed, he had lost lot of blood and there was huge defect in his chest wall and large tear in left the lung.

The hospital immediately took him for an emergency surgery, where his lung was repaired. His ribs were fixed and his entire chest wall was reconstructed in a 3 hour long surgery. It was a challenging surgery since there was extensive damage to the tissues which were mutilated and badly damaged. This made reconstruction extremely difficult and tedious. A special anaesthesia which used one lung ventilation was employed to repair the damaged lung. The surgery went well without any major complications and the patient got discharged from the Hospital on the seventh day after the surgery.

Dr.Vaibhav Mishra, Additional Director & Head, Dept of Cardio Thoracic and Vascular Surgery, Fortis Hospital, Noida said, “Road traffic accidents and related trauma pose a unique challenge as damage to internal organs and external soft tissue is often huge. Tissues are crushed not just by direct impact but various acceleration, deceleration and pressure injuries, these also have potential for infection since injuries are usually contaminated. In this case we were lucky that despite all the delay we were able to save a life. All these injuries are avoidable and road accidents and related deaths can be averted by following the traffic rules, observing speed limits and avoiding drunken driving. ”

Mr. Hardeep Singh, Zonal Director, Fortis Hospital, Noida said, “Such cases are always very difficult. However if there is even a 0.1% chance of recovery, we do everything we can. For Road Safety Week we wanted to emphasise on how life threatening injuries are treatable yet best avoided by observing road safety. It is important to inculcate good road safety practices in the youth who are going to be the future license holders of tomorrow.”

According to the WHO, there are 821 road related accidents in India every day, i.e. 34 deaths per hour. One out of every nine deaths in India are accident related. Data from the government of India has shown a 3% decline in road accidents from 2016 to 2017. This is because the government and regulatory bodies have come into play creating better traffic rules, road safety policies and plans for infrastructural development and improvement.

Barbeque & Grills under the stars by the Pool!

Walmart is mobilizing its global resources to further ......