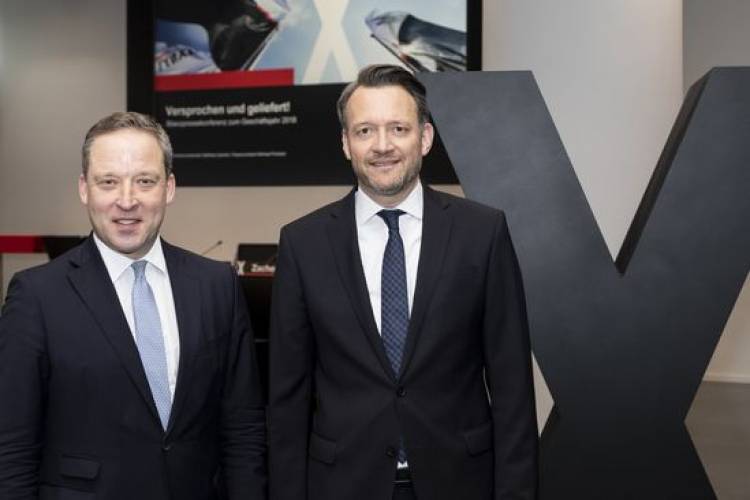 Cologne – Specialty chemicals company LANXESS closed its fiscal year with a strong result. In 2018, EBITDA pre exceptionals increased by 9.8 percent to EUR 1.016 billion. As forecast, earnings are at the upper end of the range of 5 to 10 percent above the previous year’s figure of EUR 925 million (without ARLANXEO).

“Despite rising economic headwind, we delivered on our promises. We made very good progress strategically and operationally: LANXESS now has a very clear focus on specialty chemicals. Today, we are more profitable, more stable and more competitive than ever – and that is paying off,” said Matthias Zachert, Chairman of the Board of Management of LANXESS AG.

The good operating result was driven in particular by the operating strength of the Advanced Intermediates, Specialty Additives and Engineering Materials segments as well as the integration of Chemtura and the phosphorus additives business acquired from Solvay. The EBITDA margin pre exceptionals came in at 14.1 percent.

The successful fiscal year 2018 is also expected to pay off for LANXESS shareholders. The Board of Management and Supervisory Board will propose a dividend of EUR 0.90 per share to the Annual Stockholders’ Meeting on May 23, 2019. This would be 12.5 percent more than in the previous year.

Strategic milestone in 2018: sale of the rubber business completed

When fiscal year 2018 came to a close, LANXESS achieved another milestone in its realignment. On December 31, the specialty chemicals company completed the sale of its remaining 50 percent interest in the rubber company ARLANXEO to its former joint venture partner Saudi Aramco. The two companies had founded the joint venture on April 1, 2016. LANXESS received proceeds of around EUR 1.4 billion for its share, of which it has already used EUR 200 million to further finance its pension liabilities. Another up to EUR 200 million is designated for a share buy-back, which is to be completed by the end of the current fiscal year.

“We have used the proceeds from the sale of our interest in ARLANXEO to further strengthen our balance sheet. In addition, we have gained additional scope for driving our growth forward both organically and through acquisitions,” said Michael Pontzen, Chief Financial Officer of LANXESS AG.

Strong performance in almost every segment

Operating business in the Advanced Intermediates segment performed strongly in fiscal year 2018 despite a persistently challenging agriculture market. Sales amounted to EUR 2.207 billion, up 11.7 percent on the previous year’s figure of EUR 1.975 billion. The segment’s EBITDA pre exceptionals grew by 7.2 percent from EUR 335 million to EUR 359 million. The EBITDA margin pre exceptionals was 16.3 percent, slightly below the 17.0 percent recorded in the previous year.

In the Specialty Additives segment, sales and the operating result both increased significantly as a result of the successful integration of the Chemtura and Solvay businesses. Sales amounted to EUR 1.98 billion, up 22.9 percent on the previous year’s figure of EUR 1.611 billion. EBITDA pre exceptionals grew by a considerable 28.5 percent from EUR 267 million to EUR 343 million. The EBITDA margin pre exceptionals improved from 16.6 percent to 17.3 percent.

In the Performance Chemicals segment, sales and the operating result fell short of the strong previous year due in particular to weak development in the leather and construction industries. Sales fell by 6.3 percent from EUR 1.439 billion to EUR 1.349 billion. EBITDA pre exceptionals amounted to EUR 187 million, down 25.8 percent on the previous year’s figure of EUR 252 million. The EBITDA margin pre exceptionals came in at 13.9 percent, against 17.5 percent a year ago.

The Engineering Materials segment considerably increased both sales and the operating result on the basis of the profitable business with plastics for lightweight construction. The urethanes business that was taken over as part of the Chemtura acquisition also made a positive contribution to the result. Sales rose by 15.4 percent from EUR 1.366 billion to EUR 1.576 billion. EBITDA pre exceptionals improved by a considerable 21.9 percent from EUR 219 million to EUR 267 million. The EBITDA margin pre exceptionals for the segment improved from 16.0 percent to 16.9 percent.

Compared with the previous year, the results of all segments were affected by negative exchange rate effects, particularly from a weaker U.S. dollar.

Outlook for 2019: on track despite weakening economy

LANXESS has made a solid start to the new year despite the weakening economy. LANXESS expects EBITDA pre exceptionals for the full year 2019 to be around prior-year level.

LANXESS will specify the earnings forecast for the full year 2019 when it presents its quarterly results on May 14, 2019.

**After deduction of time deposits and securities available for sale.

This company release contains certain forward-looking statements, including assumptions, opinions, expectations and views of the company or cited from third party sources. Various known and unknown risks, uncertainties and other factors could cause the actual results, financial position, development or performance of LANXESS AG to differ materially from the estimations expressed or implied herein. LANXESS AG does not guarantee that the assumptions underlying such forward-looking statements are free from errors nor does it accept any responsibility for the future accuracy of the opinions expressed in this presentation or the actual occurrence of the forecast developments. No representation or warranty (expressed or implied) is made as to, and no reliance should be placed on, any information, estimates, targets and opinions, contained herein, and no liability whatsoever is accepted as to any errors, omissions or misstatements contained herein, and accordingly, no representative of LANXESS AG or any of its affiliated companies or any of such person's officers, directors or employees accept any liability whatsoever arising directly or indirectly from the use of this document.

Booking Holdings Survey: “The Next Billion in India” Will Use the Internet to Advance...

Magic Bus and Prince’s Trust International take Nilam on a Journey from Bhandup,...

The Russian Center of Science and Culture (RCSC), Chennai has announced that the...

Legends live on! And the Royal Enfield Bullet is the best testimony to that. The...