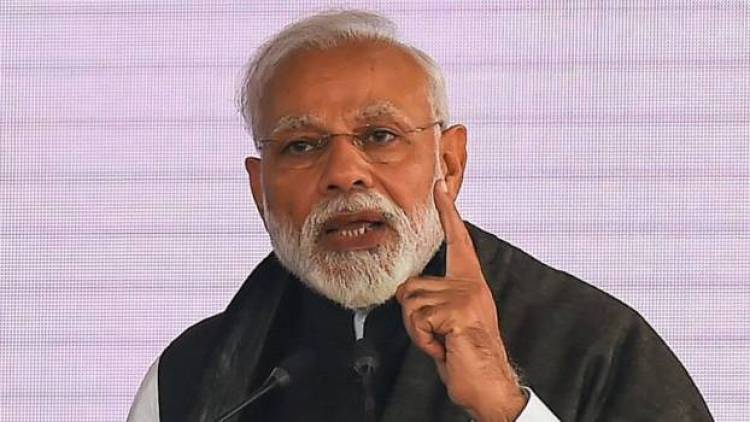 NEW DELHI: On the very day when the Congress is to kick-off its 2019 Lok Sabha campaign from the Prime Minister's home turf with its Working Committee meeting in Ahmedabad, Narendra Modi took to his blog to tell the nation that it was Mahatma Gandhi who wanted to bisband the grand old party just after Independence.

Marking the 89th year of the iconic Dandi March that was launched by Gandhi and 80 satyagrahis in 1930 on the day, Modi said the grand old party is nothing but "the perfect antithesis to what 'Bapu' stood for".

Hailing Gandhi whose "handful of salt shook the British Empire" as he set out on foot for the coastal village of Dandi from Sabarmati Ashram in Gujarat, Modi said: "Though aimed at protesting unfair Salt Laws, Dandi March shook the foundations of colonial rule and became a strong symbol of fighting injustice and inequality."

In a conversational approach to his blog readers Modi said: "Did you know who had a key role in the planning of the Dandi March?

"The great Sardar Patel", who, he said, had a key role in planning "every minute aspect" of the 390km March, "down to the last detail". The Congress have accuses the Bharatiya Janata Party of trying to appropriate Sardar Vallabhbhai Patel, the nation's first home minister.

"In many of his works, Gandhiji said that he does not believe in inequality and caste divisions. Sadly, the Congress has never hesitated from dividing society.

Gandhi, said the Prime Minister, had understood the Congress culture very well, "which is why he wanted the Congress disbanded, especially after 1947".

He recounted how the British were "scared of Sardar Sahib that they arrested him a few days before the launch of Dandi March hoping it would scare Gandhiji.

"However, none of that happened. The larger cause of fighting colonialism prevailed over everything else!"

"Gandhiji taught us to think of the plight of the poorest person we have seen and think about how our work impacts that person.

"I am proud to say that in all aspects of our government's work, the guiding consideration is to see how it will alleviate poverty and bring prosperity."

Modi said: "We have done everything to punish the corrupt. But, the nation has seen how Congress and corruption have become synonyms. Name the sector and there will be a Congress scam - from Defence, Telecom, Irrigation, Sporting events to Agriculture, Rural Development and more."

He said: "Bapu spoke about detachment and staying away from excess wealth.

"However, all that Congress has done is to fill their own bank accounts and lead luxurious lifestyles at the cost of providing basic necessities to the poor.

Modi recounted an incident when Gandhi interacting with a group of women workers, said: "I have been receiving complaints that some so called eminent leaders of India are making money through their sons, that nepotism is on the increase as also is corruption and that I should do something about it.

"If it is true all one can say is that we have reached the limit of our misfortune."

Modi added that "Bapu despised dynastic politics but the 'Dynasty First' is the way for the Congress today.

"A firm believer in democracy, Bapu said, 'I understand democracy as something that gives the weak the same chance as the strong'."

Modi stressed that "ironically, the Congress gave the nation the Emergency, when democratic spirit was trampled over".

"The Congress misused Article 356 several times. If they did not like a leader, that Government was dismissed. Always eager to promote dynastic culture, Congress has no regard for democratic values," he adeed.

"Gandhiji had understood the Congress culture very well, which is why he wanted the Congress disbanded, especially after 1947. He lamented, 'I am sorry to have to say that many Congressmen have looked upon this item (Swaraj) as a mere political necessity and not as something indispensable'."

Modi quoted gandhi as saying that Congress leaders were only busy making communal adjustments. In 1937 itself the father of the Nation said: "I would go to the length of giving the whole Congress a decent burial, rather than put up with the corruption that is rampant."

The Prime Minister ended his blog hailing his own government at the Centre that he said "is working on Bapu's path and a Jan Shakti that is fulfilling his dream of freeing India from the Congress Culture!"

1 in 20 Indians Affected by a Rare Disease: ORDI

The Organization For Rare Diseases India (ORDI), a not for profit organization committed...

Signify brings the power of lighting to five school playgrounds...

Signify has partnered with Gurgaon-based SRF Foundation for this project, which...