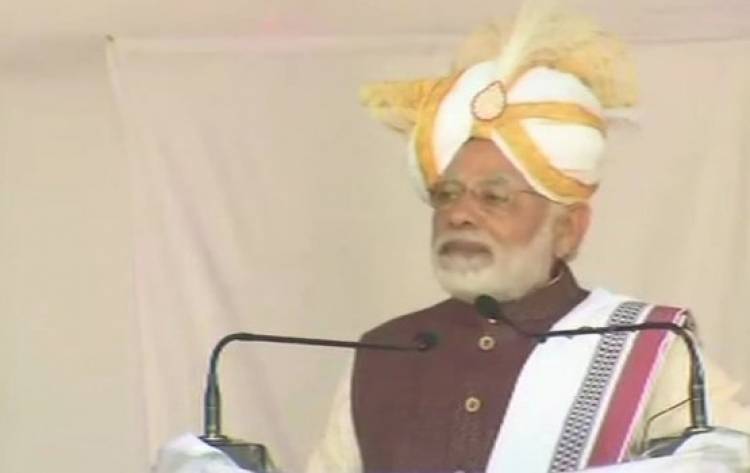 He also laid the foundation stones of four other projects which will be constructed at an estimated cost of Rs 1,500 crore.

Despite a boycott call given by some insurgent outfits, there was a huge crowd at Hapta Kangjeibung where Modi addressed a public meeting.

Modi said that most of the projects were delayed by the previous Congress government, thereby wasting more money. "If the projects had been completed without delay, people would have benefitted," he said.

The Prime Minister said that helicopter services had been introduced for the people and the construction of the Jiribam-Toupul rail line was progressing.

He said that 18,000 remote villages in Manipur had been electrified.

Modi praised Manipuri women for being in the forefront in all spheres. He recalled how Mary Kom, the international pugilist, had won fame for India.

"It is in appreciation of the brilliant sportspersons of Manipur that the National Sports University was opened in Manipur," he said.

The Prime Minister said that Delhi was now closer to the northeastern region. He said: "As Prime Minister, I have visited the region 30 times."

He said the Integrated Check Post at Moreh, the border town of Manipur, will benefit the people of both India and Myanmar in trade and tourism.

Modi arrived at Imphal amid a shutdown and boycott imposed by some underground organisations protesting against his visit.

Normal life was disrupted during the shutdown. All shops, commercial institutes, schools and colleges were shut.