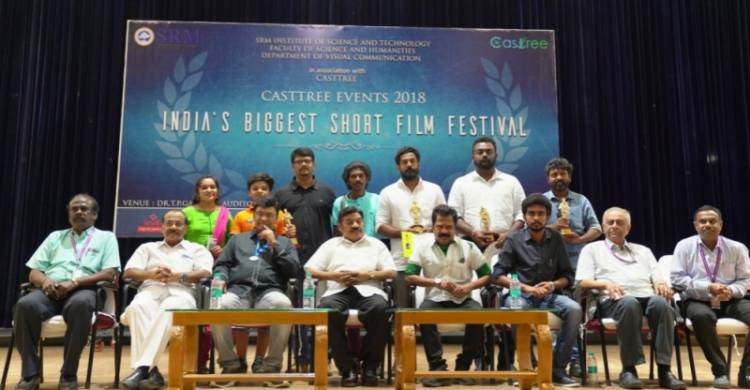 The Department of Visual Communications of Faculty of Science and Humanities of SRMIST in association with Casttree had conducted a huge all India level short film contest from 13th February 2019 to 15th February 2019.

In the award ceremony on 15th of February, Dr Sridhar Krishnaswamy, the Deputy Dean of SRMIST welcomed the participants pan India. The Veteran Actor and Director Mr. Bhagyaraj was the chief guest of the mega event who gave away the awards to the winners. Across India more than 750 short films were the entrees of which 10 films were selected for 9 categories of awards by the Jury members chaired by Actor and Director MrPandiyarajan.

The Chancellor of SRMIST, Dr Parivendharin his presidential address, appreciated the efforts of the young film makers and mentioned that the industry of entertainment is one of the foremost needs in any society and it has to keep flourishing for the benefits of better culture. The pro vice chancellor of SRMIST Dr. Balasubramanian in his felicitation encouraged and appreciated the efforts of the department of Visual Communications in organizing a such a mega event. The event came to an end with the vote of thanks by Prof. Rajesh, the head of the department of Visual communication.

Sigmoid has closed $12M in primary and secondary fundraise...

Rediscover the joy of travel with Shangri-La’s 2022 Travel...

Institute of liver diseases and transplant, .......