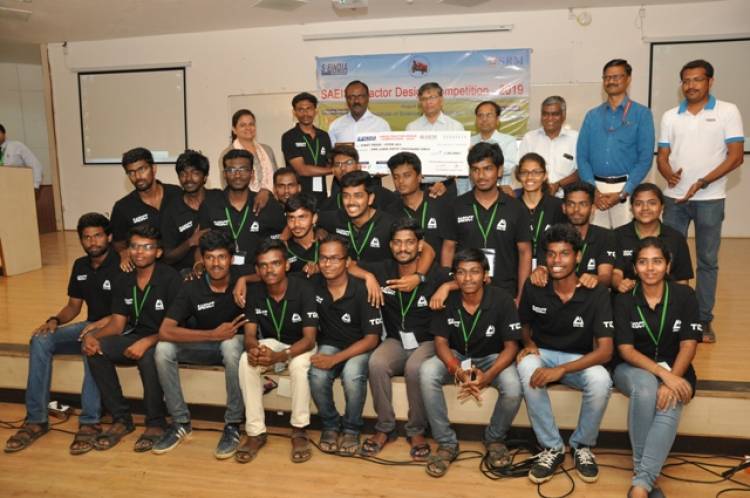 The second edition of Tractor Design Competition organized by SAE in association with SRM Institution of Science and Technology was a grand success. The two-day event, from 22 to 24 August, held at SRMIST Kattankulathur campus saw about 625 students from 24 colleges from all over India participate. Over 50 judges from various industries such as TAFE, Mahindra, RNTBCI, Simpson, evaluated the students.
The contest consisted of technical presentation and static inspection, noise and Steering tests, weight test and tractors’ brakes. The overall performance was awarded to students of Government College of Technology, Coimbatore. They were awarded a cash prize of Rs.1,50,000. The second and third place was presented with Rs. 75,000 and Rs. 50,000. Awards were also given in three other categories and each of the winners were presented with cash prizes.
The event was inaugurated by Senior Vice President, R&D, TAFE, S. Sriraman. He spoke on enhancing the Famers’ tools with innovations from student tractor teams. Director, Faculty of Engineering and Technology, SRMIST, Dr. C. Muthamizhchelvan presided over and gave the presidential address. He said that new pathways are to be found in making students ‘Industry Ready’ such as the possibility of there being a TAFE-SRM Centre of Excellence in the coming months at SRM.
Senior Faculty Advisor, SRM SAE Collegiate Club, and Professor, Department of Mechanical Engineering, SRM IST, Dr. M. Cheralathan welcomed the gathering.
Assistant Professor at BS Abdur Rahman Crescent Institute of Science and Technology, C. Sivakumar, gave a brief introduction about the competition and its impact. Head of the Department of Automobile Engineering, SRM IST, Dr. Leenus Jesu Martin, gave a glimpses of the accolades won by SRM teams in BAJA, SUPRA competitions and also the induction of new teams such as Efficycle and Tractor teams.
N. Rengarajan, Vice President, Operations, Simpson & Co. Ltd. was the chief guest for the valedictory event. The Guest of Honor was S Sriraman, Senior Vice President, R&D, TAFE. P Baskara Sethupathi, Faculty advisor of SRM SAE Collegiate club and Assistant Professor, Department of Automobile Engineering, SRM IST gave the vote of thanks.

Unique Surgery saves the life of a 2 year old

Prime Video India saw its best ever viewership in the month...