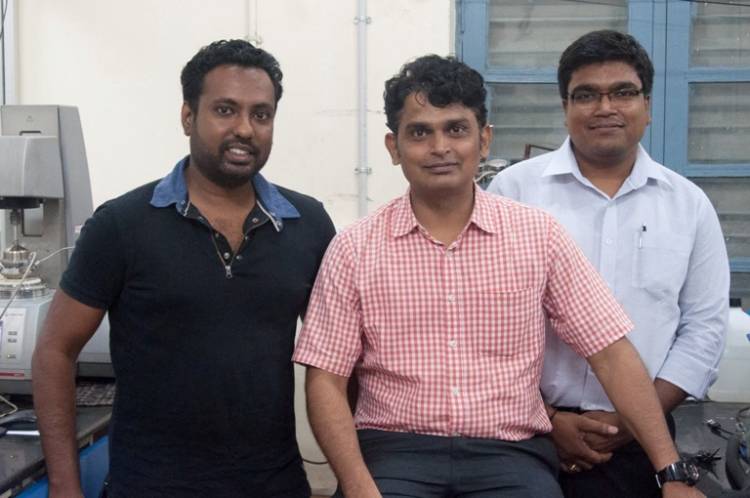 CHENNAI, 18th June 2019: Indian Institute of Technology Madras Researchers are developing new techniques for extracting methane from natural gas hydrates.  Promising results from their research have been published in leading international journals such as Energy and Fuels and Applied Energy recently.

There has been worldwide interest in the development of techniques to extract methane gas trapped in ice-like crystalline cages called ‘Gas hydrates,’ which are present in shallow sediments along continental coastlines. Hydrates are particularly promising methane sources in India because nearly 1,900 trillion cubic meters of methane gas lie untapped in these cages within the waters of the Indian Exclusive Economic Zone. This is 1,500 times more than country's present gas reserve.

The Ministry of Earth Sciences, Govt of India, reports that Krishna-Godhavari basin and Andaman Basin have large amounts of gas hydrates. This IIT Madras research towards developing techniques to extract methane from gas hydrates can enable indigenous supply of natural gas and potentially lighten the nation’s natural gas import burden.

The research is being headed by Dr. Jitendra Sangwai, Professor (Petroleum Engineering), Department of Ocean Engineering, IIT Madras, who studies state-of-art processes used to recover crude oil from offshore reservoirs in India, and includes Research Scholars Mr. Pawan Gupta and Mr. Vishnu C. His research is being funded by IIT Madras and Department of Science and Technology (DST), Govt. of India.

Speaking about the importance of this research, Dr. Jitendra Sangwai said, “Research is underway around the world to develop methods to extract methane from gas hydrates from both clayey and sand-dominated reservoirs. The Krishna-Godhavari basin is a clayey reservoir while the off-shore Indian peninsular ones are a mix of both clayey and sandy. As gas hydrates are comparatively immobile and impermeable, they need to be dissociated into their constituent gas and water before the methane recovery from hydrate reservoirs is possible.”

In their study on thermal stimulation and depressurization, the IIT Madras research team reported that the combination of the two processes is more efficient for methane production from clayey hydrate reservoir than either, individually. This has been attributed to the relatively faster increase in volume available for the gas to expand upon application of heat, which results in faster decrease in pressure of the hydrate reservoir. For the depressurisation process alone, the researchers also found that multistep depressurisation is more efficient than the single-step depressurization.

Depressurisation is the most energy-efficient production approach for extracting gases from clayey hydrates and is possibly the most likely technology to mature in near future.

The IIT Madras Research team also studied polymer flooding for the extraction of methane from hydrates.  This method is already used for oil recovery from matured crude oil fields. In this process, water, made viscous with a polymer, is injected into the field to force out the oil.  Polymer flooding helps in establishing a stable waterfront at the water-oil interface and improves the sweep efficiency of the reservoir.  Polymer flooding has not yet been applied to methane recovery from gas hydrates.

“Information on the dissociation kinetics of methane hydrate and the effect of the molecular weight of polymers is necessary for the successful use of polymer flooding for gas production from hydrate reservoirs,” write the researchers in their paper, of the motivation to study this process. The researchers report that the eco-friendly polymer, polyethylene glycol-200 is best suited for extracting methane from hydrate.  The low freezing point of PEG-200 (~65 C), makes it a good polymer to be used in hydrate bearing zones with low reservoir temperatures.

It is believed that energy content of methane occurring in hydrate form is immense, possibly exceeding the combined energy content of all other known fossil fuels. “Controlled extraction of methane from gas hydrates can not only meet the enormous demand for energy all over the world but can also reduce detrimental geological release of greenhouse gas into the environment from these sources”, added Dr. Sangwai.

Development of emerging techniques for controlled extraction of methane from hydrates entails concerted efforts between academic, government and industrial laboratories and can potentially lead the country towards self-sufficiency in the energy sector.

Chennai will have heatwave conditions till Wednesday

Flipkart aims to make e-commerce more inclusive with its...

In continuation of its efforts ......