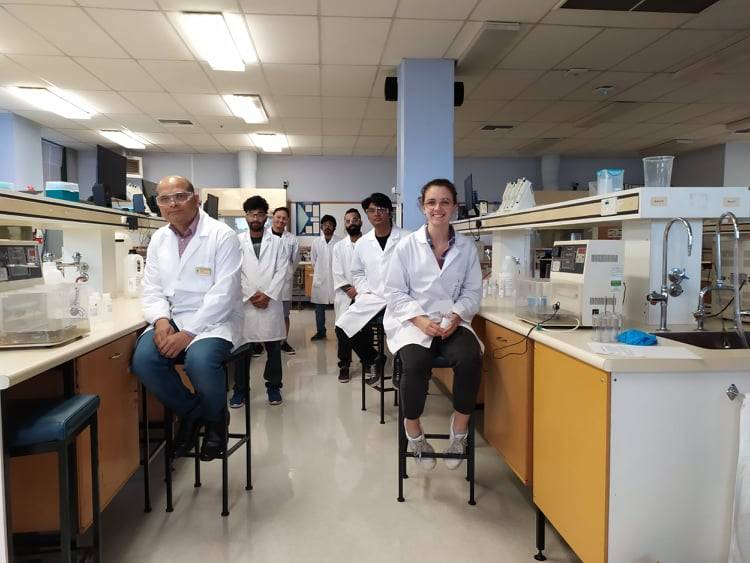 All the hand sanitizer needed by the University of Otago’s Dunedin campus over the coming weeks has been produced in-house and in record time by a School of Pharmacy senior lecturer and his students.

Dr Das says he had wanted to contribute to the community during this COVID19 pandemic but had been unsure how. He had been researching the development of inhalers to help with this disease but knew that would take time.

“So I immediately decided to prepare essential hand sanitizer, of which there is currently a crisis in the market, to help minimize the spread of viruses and save lives. And all my students devoted themselves to this novel initiative, to help in this humanitarian crisis.”

That idea became action following the generous support of Professor Carlo Marra, the Dean of the School of Pharmacy, Dr Das says.

In all, 100 litres of the sanitizer was produced over three long days in six batches, with the last of it completed just before the School of Pharmacy’s doors were locked for the nationwide shutdown on Wednesday, Dr Das said. That amount of sanitizer more than covered the University’s needs.

Emergency and Business Continuity Coordinator Andrew Ferguson says the bulk of the sanitizer was being distributed to the essential services remaining open on campus, including Campus Watch and the campus’s residential colleges.

The excess sanitizer has been made available to Dunedin Public Hospital and Civil Defence.

While the University sanitizer was not available to the public, Mr. Ferguson says it was hoped its production would take a significant amount of pressure off commercial suppliers, freeing up capacity for the general public.

Education New Zealand (ENZ) is New Zealand’s government agency for international education. ENZ works to grow awareness of New Zealand as a study destination and to support New Zealand education providers and businesses to take their services and products abroad.

Samir Modi celebrates the grand success of Modicare with...

PM JAY is here to stay; industry must reposition to align...

With the temperatures soaring across the country, ...