March 23 is observed as Shaheed Diwas to pay tribute to Bhagat Singh,Rajguru and Sukhdev Thapar 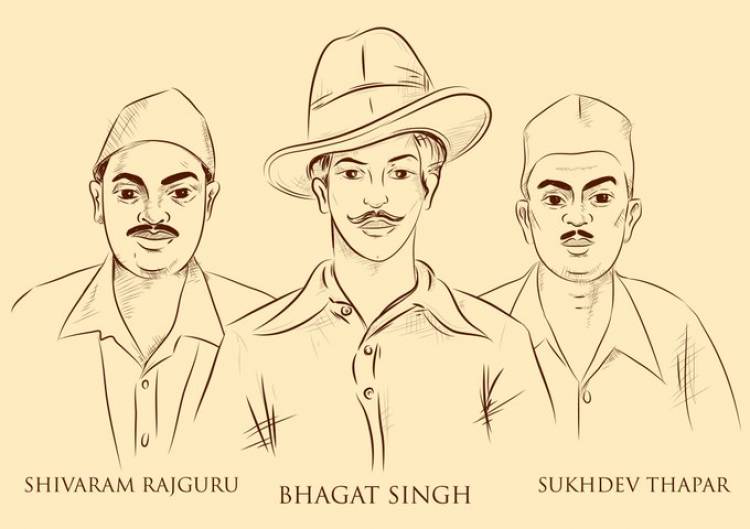 Shaheed Bhagat Singh (1907- 23 March 1931) was an Indian socialist revolutionary whose two acts of dramatic violence against the British in India and execution at age 23 made him a folk hero of the Indian independence movement. Shaheed Bhagat Singh became a popular folk hero after his death. Jawaharlal Nehru wrote about him, "Bhagat Singh did not become popular because of his act of terrorism but because he seemed to vindicate, for the moment, the honour of Lala Lajpat Rai, and through him of the nation. He became a symbol; the act was forgotten, the symbol remained, and within a few months each town and village of the Punjab, and to a lesser extent in the rest of northern India, resounded with his name."

Shaheed Shivaram Hari Rajguru (24 August 1908 – 23 March 1931) was an Indian revolutionary from Maharashtra, known mainly for his involvement in the assassination of a British Raj police officer.He also fight for the independence of India and On 23 March 1931 he was hanged by the British government along with Shaheed Bhagat Singh. He was a member of the Hindustan Socialist Republican Association, who wanted India to be free from British rule by any means necessary.

Shaheed Sukhdev Thapar (15 May 1907 – 23 March 1931) was an Indian revolutionary. He was a senior member of Hindustan Socialist Republican Association. He was hanged on 23 March 1931 at the age of 23. His ancestral house is in Naughara Mohalla of Ludhiana town, Punjab, India. He was son of Ram Lal and Ralli Devi.He sacrificeed his life for independence of India. Sukhdev is best remembered for his involvement in the Lahore Conspiracy Case of 18 December 1928 and its aftermath.He was an associate of Bhagat Singh and Shivaram Rajguru, who assassinated Deputy Superintendent of Police, J. P. Saunders in 1928 in response to the violent death of the veteran leader Lala Lajpat Rai.

On 23 March 1931, the 3 freedom fighters, Bhagat Singh, Sukhdev Thapar and Shivaram Rajguru hanged in Lahore jail.Their bodies were secretly cremated at the banks of the River Sutlej.

Their courage will always inspire & guide generations to work towards nation building.

Come share a laugh at the OnePlus Experience Store

HP and our digital manufacturing partners are working non-stop in the battle against...