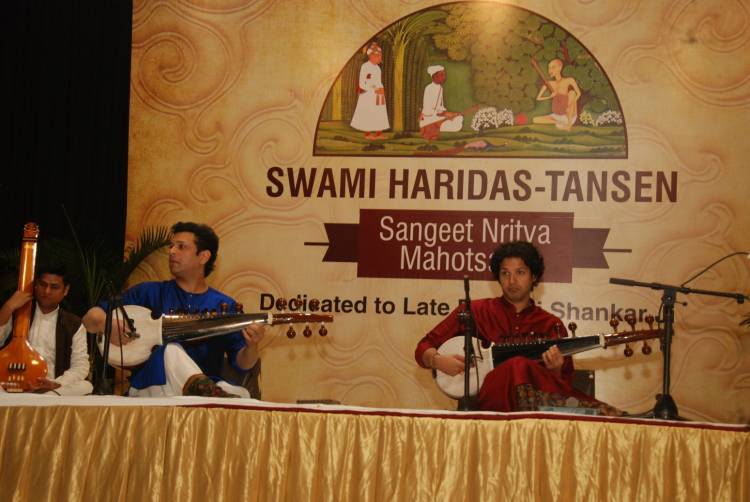 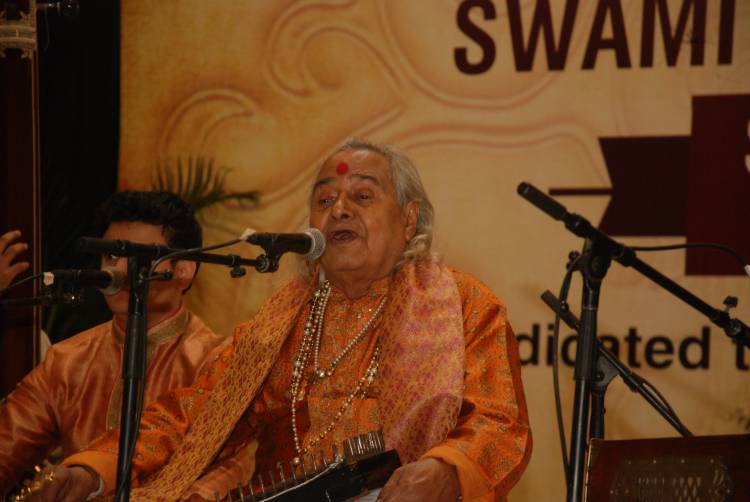 Next year we will see 20th edition of the festival which will be having more legends: Dr Uma Sharma

The 19th  edition of the Swami Haridas-Tansen Sangeet Nritya Mahotsava, presented by Shri Ram Centre for Performing Arts and Bharatiya Sangeet Sadan concluded here, which aimed at reviving and enhancing interest in traditional Indian art forms, both musical and performing arts, particularly with the younger generation. The four-day event which was organized from January 9th  to 12th  at the Sir Shankarlal Hall, Modern School New Delhi , witnessed performances by the country’s legendary classical music and dance performers.
The event was attended by over 12,000 arts enthusiasts over the four days in the capital “It is necessary to present these old pieces before today’s audience. Puraani cheeze gum ho jayengi nahi toh. I still dance because I’m passionate about it. I don’t feel tired ever,” says Uma Sharma.
The Mahotsav started on a high note with the engaging performance of the veteran Ustad Ashish Khan on Sarood with Pt. Bickram Ghosh on Tabla . Performance started by Ustad Ashish khan in Raag Jhinjhoti and Raag Maanj Khamaj.  With his perfection, he proved why, till now, he is unparalleled in his arena. The evening was further enriched with an outstanding performance by Hindustani classical singer Parveen Sultana, She perform  a Bhajan ‘‘Kaun Gali Gaye Shyam’  in Raag Puriya Dhanashree and  after she sang the famous song  ‘Hame Tum se Pyar kitna’ in  Raag Hans Dhoni on the request of Public. and Evening last performance given by Grammy award winner Pt. Vishwa Mohan Bhatt with collaboration to Pt. Salili Bhatt and Manganiyarsom from Rajasthan. A capacity crowd of music lovers was enthralled by the melodious notes emanating from his “mohan veena”.  For the majority it was their first introduction to the beauty and depth of indian classical music. Pt. Vishwa Mohan Bhatt started his performance by playing his own raag ‘vishwaranjani’ and after that he perform on ‘Jhilmil Barse, Padhro Mare Desh, Dama Dam Mast Kalander  aur Aaj jane ki jid na karo’.  In the End of concert he perfumed “ Matram” on the request of audience.

The day two of the festival began with Padmashri Ustad Fayaz Vasifuddin Dagar Ji was singing  Dhrapad) in which he started singing Raga Puriya. He teased Shiva's alap. The audience present greeted with applause. Dhrupada is the path of devotion to God. In this, he introduced Shankar Girijapati in the Raga Malkosh. When Dagar introduced the Ras piya bandish, Mohan Shyam Sharma supported him on the pakhawaj, and Shri Shrio Bhardwaj and Neeti Lamba supported him on the Tanpura. second performance by Padmabhushan Pt. Channulal Mishra ‘Ganesh Vandana’ and it was the  introduction of classical Music . He  Starting with the raga Hansdhwani "Jai Maat Pitamber",  ‘Jab laaj gaai tab laaj kaha hai’, Hanuman  Ghazal. Audience appreciate the Thumri, Raag Bahar Bandish .He finished singing along the lines of Kabir. The day culminated a flute of Padma Vibhushan Pandit Hariprasad Chaurasia ji, amidst the chill winds of Delhi, Pandit Hariprasad Chaurasia's flute played such a magic that all the listeners started drowning in the ocean of Nad Brahm. The present audience of Pt. Chaurasia's flute playing got so lost in tone that they even forgot the winter of Delhi. He started his performance in  Raag ‘JaiJaiwanti’ and ended his performance in Raag ‘Damyanti’.

The day three, began with Pt. Rajendra  Gangani. This festival is held in the name of great guru Swami Haridas and Tansen.  Swami Haridas  have written alot  about lord Krishna , Pt. Rajendra  Gangani started his  performance with the beautiful ashpadi written by Swami Haridas  which states    ‘Pratham  daras govind roop ke praanapiyaare , dooje mohanamadan , sanaatan suchi ur dhaare’.  Then he continue with the paramparik shudh nritya which consists of  UPAJ , THAAT is typical jaipur gharana flavor,  and the special UTHAN  were followed by the GANESH PARAN which will prelude with Gaja Gamini  and also performed some of the special  lamchadd bols  through Paran.  As tansen ji was dedicated to his guru Swami Haridas. He also presented a Guru Bhajan to this guru - Shishya Parampara and ended his performance with jugalbandi a conversation between tabla and ghunghroo. Accompanist with Pt. Rajendra  Gangani on Tabla Pt Fateh Singh Gangani, Vocal by Sh. Mahadav Prasad. The second performance of the evening featured the renowned kathak Dancer Padma Bhushan Dr. Uma Sharma. She is also the organizer of this Swami Haridas Tansen Sangeet Nritya Mahotsav Mahakumbh of this music and  dance, Dr. Uma Sharma started his performance with thumri "vaaree vaaree shyaam hoon vaaree", aur najirayaaseje nahin kahee aur ", ga kar bhaav ne bataaya . For the Guru Shishya Prampara she share the stage with her students and  gave chance to  perform. Third Performance given by sitar player of the ‘Imdadkhani gharana’  Ustad Shujaat Khan. He started his performance in  Raag Tilak Kamod, the magic of his fingers and his voice forced all the audience to sway amidst the chill winds of Delhi. He said, "Every kind of music is liked in the world. You just keep listening to music. Good and bad.”. These two are always playing together. Every kind of music is there in the world. I am a small classical association. There are different kinds of people in the world, you are in every music. It is important ". The last performance for the night was delivered by celebrated Vokalist, Padma Shri Pandit Ulhas Kashalkar . Ulhas has imbibed the singing of the three music Gharana Gwalior, Jaipur and Agra.In a single performance, he showed the style of the three music Gharna. In keeping with the practice of raga, Ulhas Kashalkar described the beauty of the three music Gharna. However, they consider Gwalior as the basis of their singing.

The last day of the festival began with a mesmerising performance by the Khan Brothers, Amaan Ali Khan and Ayaan Ali Khan. Khan Brothers given first performance in  Raag Lalita Gauri and then perform Jhaap taal and Teen Taal.The Mohatsava concluded with the performance of legendary Sarod maestro Ustad Amjad Ali Khan he given his first performance in Raag Darbari which was created by Tansen and he shared a special memory with audience which was related to Raag Drabari. After Raag Darbari he gave second performance in Ghamas in which he performed “ ekla chalo’ which was written by Rabindranath Tagore and last performace gave in  Raag Bhairavi. Accomplished in last day with Khan Brother and Ustad Amjad Ali  was along with  Tabla Satyjeet Tawalkar and Anubrota Chatarjee and along with Tanpura Vipul Kumar.