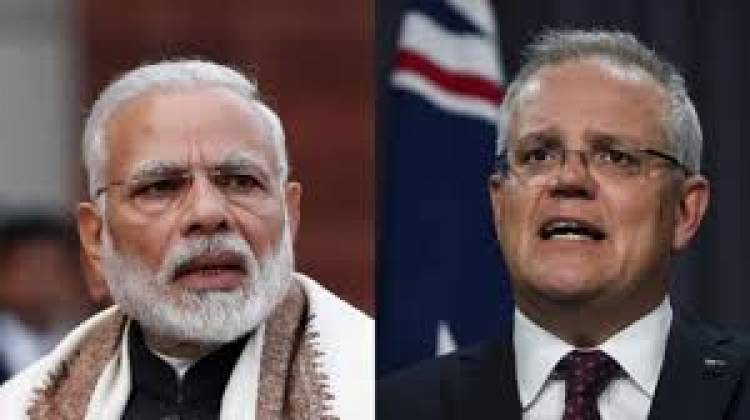 Australia on Thursday extended its support for India's candidacy for permanent membership of a reformed United Nations Security Council (UNSC) and membership of the Nuclear Suppliers Group (NSG).
Australia extended its support at the first virtual summit with India. Prime Minister Narendra Modi and his Australian counterpart Scott Morrison jointly participated in the summit.
During the meeting, the two countries elevated the bilateral Strategic Partnership concluded in 2009 to a Comprehensive Strategic Partnership (CSP).
"Australia reiterated its support for India's candidacy for permanent membership of a reformed UN Security Council (UNSC) and India's candidature for a non-permanent seat at the United Nations Security Council for the 2021-22 term," read a joint statement on CSP between the two countries.
Several countries have backed India to be a permanent member of the UNSC. The body has five permanent members -- China, France, Russia, the UK and the US.
"Both sides reiterated their support for continued bilateral civil nuclear cooperation and their commitment to further strengthen global non-proliferation. Australia expressed its strong support for India's membership of the Nuclear Suppliers Group (NSG)," it said.
The NSG is a group of nuclear supplier countries that controls the export of materials, equipment and technology that can be used to manufacture nuclear weapons.
Australia welcomed the International Energy Agency's (IEA) strategic partnership with India and looks forward to continuing to work closely on building stronger ties between India and the IEA community, the joint statement said.
The two sides also unveiled a "shared vision for maritime cooperation in the Indo- Pacific" and signed seven agreements focused on crucial areas such as defence and rare earth minerals.
In his remarks, Prime Minister Narendra Modi said India is committed to expanding its relations with Australia on a wider and faster pace. This is important not only for our two countries but also for the Indo-Pacific region and the world, stressed Modi, adding further that Australia is one of India's friends.
"So the criteria for the pace of development in our relations should also be ambitious," he said.
In his remarks, Morrison also reflected on the joint declaration between Australia and India on a shared vision for maritime cooperation in the Indo-Pacific which looks forward to bring together scientists from the two countries.
"We share an ocean. We share responsibilities for that ocean as well. It's health. It's well-being. It's security. The relationship we are forming around those issues on our maritime domain," the Australian Prime Minister stressed in the summit.

Max Life to be 70:30 joint venture between Max Financial...