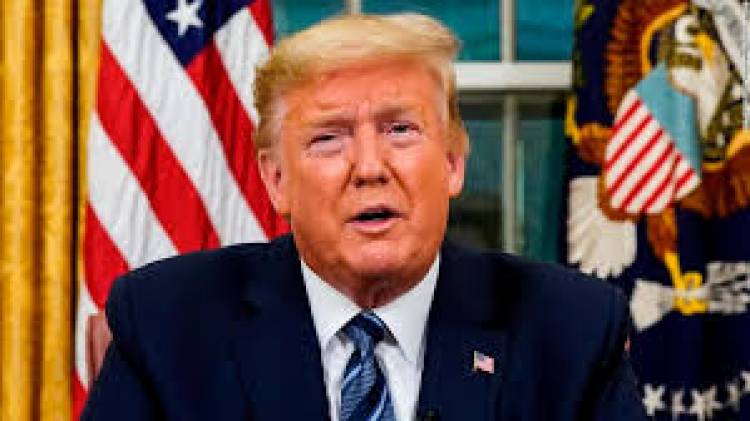 US President Donald Trump has said that the next 30 days are very vital for America in the fight against the coronavirus pandemic, as the confirmed cases of those infected by the deadly disease soured to 164,000 and fatalities crossed 3,100 in the country.

His remarks came a day after he extended the "social distancing" guidelines until April 30, expecting the peak death rate from COVID-19 to hit the country in two weeks.

"Challenging times are ahead for the next 30 days, and this is a very vital 30 days," Trump told reporters at his daily White House news conference on Monday, his second consecutive one in the Rose Garden.

More than 250 million of America's 330 million population are in stay at home order and more than two dozen states have been notified as major disaster declaration, in addition to declaration of national emergency.

The Army has been roped in to build makeshift hospitals at convention centers, racetracks, public parks across the country.

Auto companies have stopped manufacturing cars and instead manufacturing ventilators and other equipment to be used in the treatment of hundreds and thousands of Americans who are expected to fall ill due to COVID-19; something which was seen only during a war time.

"We are sort of putting it all on the line this 30 days, so important because we have to get back, but the more we dedicate ourselves today, the more quickly we will emerge on the other side of the crisis, and that is the time we're waiting for," Trump told reporters, reflecting upon the seriousness of the pandemic that has hit the US hardest among all the countries.

So far more than a million Americans have been tested for coronavirus, which is the highest for any country and its testing rate has now increased to 100,000 per day.

The President said that he will announce tightening of the guidelines, which he argued is having a big impact.

Manufacturing of testing kits and medical equipment including ventilators, face masks have been ramped up, he said, adding that there will be no shortage in the coming weeks.

Dr Deborah Bix, a member of the White House Task Force on Coronavirus, had a day earlier said that even with all the present steps, the death toll in the US could be between 100,000 to 200,000. On Monday she said that the analysis of the fresh data would be presented before the president on Tuesday.

Trump told reporters that he is looking into the possibility of everybody wearing a mask in the public.

"We're getting certainly the number of masks that you need. We are in the process of talking about things. I saw his suggestion on that, so we'll take a look at it for a period of time. Not forever. I mean, you know, we want our country back. We're not going to be wearing masks forever, but it could be for a short period of time after we get back into gear," he said.

Responding to a question on suggestions about using GPS for social distancing, he described this as a very severe idea.

"I've been hearing about it. GPS. What happens, a siren goes off if you get too close to somebody? That's pretty severe," he said.

Trump told reporters that saving the lives of the people is his top priority, followed by the nation's economy.

"My focus is saving lives, that is the only focus I can have. We are going to bring the economy back and we will bring it back fast," he said.

Trump said that the extension of social distancing measure till April 30 is based on modelling that shows the peak in fatalities will not arrive for another two weeks.

According to reports, the death toll from the coronavirus pandemic has soared past 35,000 while the number of confirmed cases topped 750,000 globally.

Imperative for businesses to join hands with govt, civil

Oil Free with your Monthly Shopping at Big Bazaar

Someone has rightly said, “Love has no boundaries, no rules and knows no reason”,...

Efforts on for online delivery platform for street vendors:...

Prime Minister Narendra Modi on Wednesday said efforts are being made to provide...