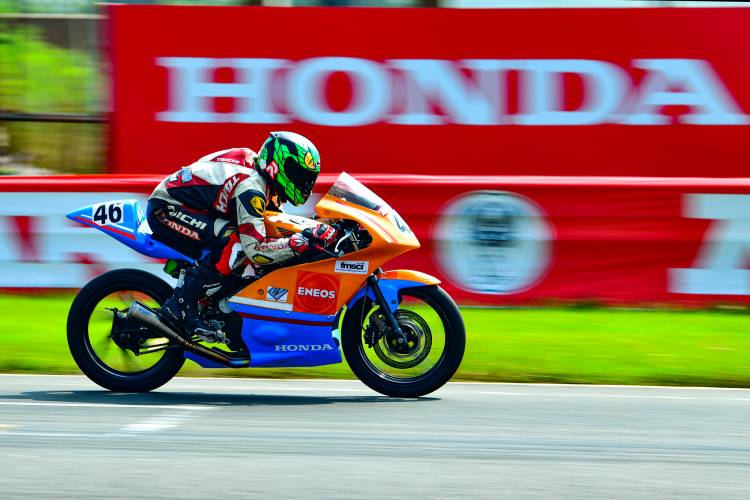 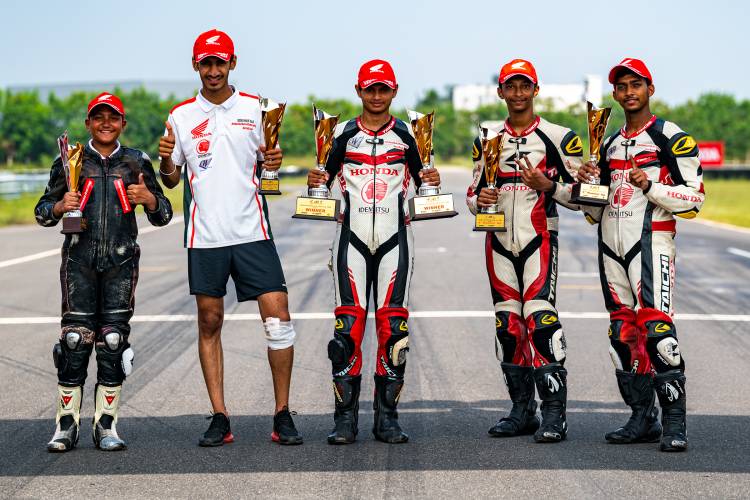 Speaking on the final race day, Mr. Prabhu Nagaraj, Senior Vice President, Brand & Communication, Honda Motorcycle & Scooter India Pvt. Ltd. Said, “The ENEOS Honda Erula Racing Team has wrapped up the opening round with 7 podiums. Our team is now leading the PS165cc and we are on plan to cement our brand leadership in national championship. Mathana’s exceptional performance in this round got a win & a total of 4 podium finishes. Parallely, despite starting the season with limited track exposure, our young guns have performed beyond our expectations. I congratulate all the winners for putting up a wonderful show this weekend and expect a great closing to this season.”

Mathana Kumar snaps the win in last lap of Pro-Stock 165cc race 4
In an intense battle to the finish line, it was Honda’s Mathana Kumar who boosted by his 3rd place finish in morning’s race powered his way in the last lap of PS165cc race 4 and won today’s race with a lead of 0.955 seconds. While it was a hard luck for Rajiv Sethu. Despite his second position start based on the PS 165cc race 3, Rajiv in a bid to maintain his position got crashed in last lap along with Senthil Kumar.

IDEMITSU Honda India Talent Cup – NSF 250R & CBR 150R categories
The NSF 250R saw a repeat show by Sarthak Chavan, Kavin Quintal & Varoon S finishing the race 2 at 1-2-3 places respectively. With an aggressive start from the beginning, Sarthak won the podium with total time of 11:11.204. Giving a tough fight to Sarthak was Kavin who steered up his way in last laps and got close to Sarthak. With just 0.105 seconds behind, Kavin finished second and recorded the best lap of 1:49.487 in today’s race as well. Lapping back home after Kavin was Varoon S with total time of 11:18.939.

The action packed race 2 by next gen-riders saw Chennai’s Shyam Sundar notching his second win of the season. In a tough battle for victory between Shyam Sundar, Prakash Kamat & Vivek Rohit Kapadia, it was Prakash’s crash in penultimate lap that left other two riders fighting for the ultimate win. Shyam Sunder after making a move over Vivek Kapadia in final sector of Lap 5 won the race (Total time 13:40.109) while Vivek had an unfortunate crash at last corner of final lap. Vivek’s crash confirmed Johann Emmanuel’s second place at podium. Joining them third on the podium was the youngest Rakshith Dave (12-year-old) of Chennai.

HONOURABLE MINISTER FOR HEALTH AND FAMILY WELFARE OF TAMIL...

YES BANK has joined the ‘PSB Loans in 59 Minutes’ initiative by the SIDBI led consortium...