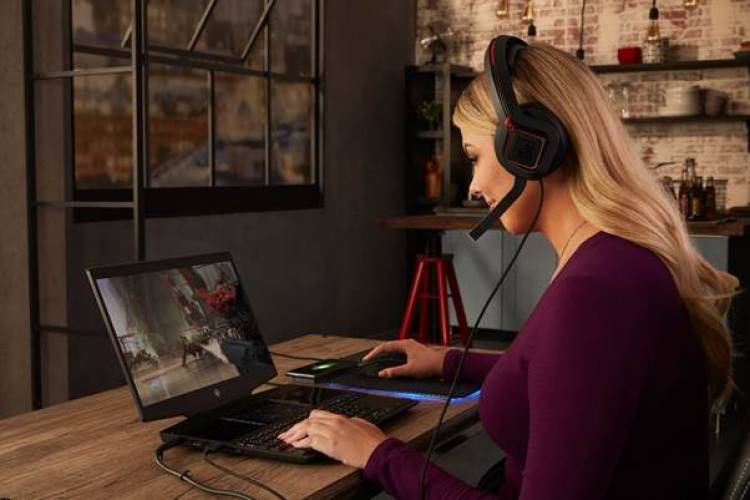 The vOMEN X 2S– the world’s first dual-screen gaming laptop1 –provides extraordinary power and multitasking capabilities, the OMEN 15 laptops bring exceptional power in their thinnest forms yet, and HP Pavilion Gaming 15 laptop offers outstanding versatility and mobility for gamers and creatives alike. In addition, with enhancements to OMEN Command Center software and new OMEN and HP Pavilion Gaming displays and accessories, HP has engineered an industry-leading gaming ecosystem that delivers everything gamers need to progress and achieve their goals.

The inspiration behind the OMEN X 2S 15 was derived from insights and feedback from the OMEN gaming communities. The modern gamers have a mobile screen-stacking habit, constantly communicating with their community on Twitch or watching livestream/game tips during gameplay. Gamers also use their mobile phones for messaging during gaming sessions, listen to music, and watch game related live streams, video content and browse websites. With this in mind, HP has added an unprecedented second screen to the OMEN X 2S in the form of an easy-to-use six-inch 1080p touch screen that lets players message friends in WhatsApp, browse in Spotify, watch Twitch, YouTube, or even serve as a hub for OMEN Command Center software.

“Gaming it is not just a hobby but a fast-evolving lifestyle and, in select cases, a profession. At HP, we share our users’ passion and love for the game – be it beginners, enthusiasts or professionals. We have engineered the best experiences based on user insights to enable a holistic and exciting gaming ecosystem for the modern gamers in India,” said Sumeer Chandra, Managing Director, HP Inc. India.

“As the market leader, HP is democratizing gaming in India by bringing powerful devices and solutions that cater to the needs of all types of gamers,” said Vickram Bedi, Senior Director, Personal Systems, HP Inc.India. “We are pushing the paradigms of gaming innovations through disruptive new devices like OMEN X 2S, that provide unmatched experiences to the gamers and help them reach the next level.”

As the world’s first dual-screen gaming laptop1, the OMEN X 2S shakes the foundation of what’s expected of a gaming laptop, with tremendous multi-tasking capabilities for various activities and support with dedicated hot keys. The OMEN X 2S, further bolstered by a real-time screen mirroring feature that can cut and magnify parts of the main screen – including copying the map portion of a racing game – to the second screen, ensures vision is centered and head movement more vertical than horizontal.

This powerhouse is 20 mm thin with a full metal chassis and is the first 15-inch diagonal gaming laptop in the world to come with an applied liquid metal compound to the thermal system by way of Thermal Grizzly Conduct onaut. The path to smaller, cooler, and more powerful applies to the newest version of the OMEN 15 laptop. With a 20 percent reduction in thickness over previous versions, it sits at a slim 20mm.

Both laptops feature OMEN Tempest, an overhauled advanced thermal solution powered by a 12V fan, which utilizes three-sided venting to enable five-way airflow to keep things ultra-cool. Realistic visuals are delivered by support for up to NVIDIA® GeForce RTX™ 2080 features Max-Q7design for the OMEN X 2S and OMEN 15. Additionally, multitasking and grand-scale games – which take mountainous resources – have never been smoother, with up to the latest 9th Gen Intel® Core™i9 high performance mobile processor8, powered by up to 5.0 GHz Turbo9, eight cores and 16 threads, and up to 16 GB of RAM.

The new Intel® Wi-Fi 6 (802.11ax) designed to support gigabit speeds up the wireless game with up to 3X faster file transfer speeds than Wi-Fi 5(802.11ac)12. Top it off with options up to an esports standard 144 Hz refresh rate131080p display that allows visuals to flow across the screen with viper strike-like speed and NVIDIA® G-SYNC® on the OMEN X 2S and available on select OMEN 15configurations.

Since its creation, OMEN Command Center has evolved as the software solution for managing and enhancing gaming hardware. The evolution continues with two additions coming to the platform for all three new OMEN devices. Performance Control cranks up fan RPM to either maximize cooling or performance, based on the chosen setting. The new OMEN Dynamic Power feature manages CPU and GPU wattage based on what a game is utilizing at a given moment to maximize FPS. Combined, these powerful additions serve to improve gameplay while also adding a level of flexibility.

Designed with a thinner frame than before, the latest HP Pavilion Gaming 15 laptop arrives with an eight percent decrease in height over the previous model. Technological improvements across the board arrive with options up to the latest 9th Gen Intel Core i5/i7 high performance mobile CPUs7 and up to the recently announced NVIDIA® GeForce® GTX 1660 Ti with Max-Q design6.

Become a cord breaker with the OMEN Photon Wireless Mouse. With a variety of customization options, including removable rests and 11 customizable buttons, it’s laboriously crafted and includes a tensioning-balance system that ensures effortless optical-mechanical mouse clicks for big and little fingers alike. To address concerns of latency, connectivity, and battery life in wireless mice17, OMEN Photon features2.4 GHz Proactive Wireless Technology, 0.2ms click response time, the ability to charge on any Qi enabled surface, and up to 50 hours of battery life18.

Constructed with Qi wireless charging capabilities, the OMEN Outpost Mousepad can fully charge the OMEN Photon Mouse in 2.5 hours and works with compatible smartphones. Added adaptability comes in the form of rigorously tested hard and soft anti-fray mat options, which can be selected by simply flipping the mat to the desired side. A USB-A Passthrough port for a wireless dongle and OMEN Command Center customizable RGB LED lighting cement the capabilities of this advanced mousepad19.

* HP OMEN X 2S Laptop is expected to be available on July 1 via HP.com and other retailers from a starting price of INR 209,990

* HP OMEN 15 Laptop is available now via HP.com and other retailers from a starting price of INR 124,990

* HP Pavilion Gaming 15 Laptop is available now from a starting price of INR 70,990

* OMEN Photon Wireless Mouse will be available on July 1 on HP.com and other retailers from a starting price of INR 8,499

* OMEN Outpost Mousepad will be available on July 1 on HP.com and other retailers from a starting price of INR 7,999

* Pavilion Gaming Headset 400 is available now via HP.com and other retailers at a price of INR 1,999

* Pavilion Gaming Mouse 300 is available now via HP.com and other retailers at a price of INR 1,799

For more information about the OMEN by HP ecosystem of gaming PCs, displays and accessories, visit: http://www8.hp.com/us/en/campaigns/gamingpcs/overview.html.

Nutrition among toddlers in India

Varun Arakattalai launched to create a sustainable future for the Underprivileged

FRAI appeals to the Prime Minister to order recall of proposed...

FRAI appeals to the Prime Minister to order recall of proposed amendments in the...

TPV Technology Announces the Availability of the Revolutionary...

Taking the consumer television viewing experience to the next level, TPV Technology...