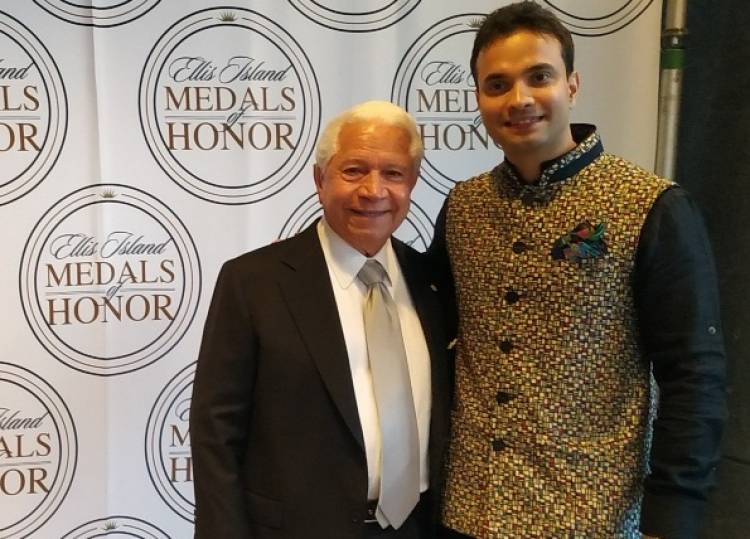 Amitabh is the youngest Indian Citizen to won the International Ellis Island Award recently at the Statue of Liberty.  Both the US House of Representatives and Senate have officially recognized the Ellis Island Medals of Honor, and each year's recipients are read into the Congressional Record. Past Medallists also include seven U.S. Presidents, several world leaders, several Nobel Laureates and countless leaders of industry, education, the arts, sports and government, along with everyday American’s who have made freedom, liberty and compassion a part of their life's work.  Ellis Island Society’s mission is to honor and preserve this diversity and to foster tolerance, respect and understanding among religious and ethnic groups.

Amitabh Shah launched Yuva Unstoppable in 2005, at a mere age of 23. After his MBA from Yale, he declined a JPMorgan Wall Street oﬀer to work on the Real Streets of India. He decided to launch this movement after he discovered the immense suﬀering experienced by his elderly 82 year old nanny, Kamlaben, when she was abandoned and abused by her son.  He gathered friends and began volunteering at homes for the elderly, slums and orphanages.  Amitabh truly believes in what Gandhi said – Be the change you wish to see in the world. There was serious resistance for the ﬁrst year from his friends and family as they thought he was losing his mind, why starts serving others so early? Why don't you wait till you are 60 when you are a Billionaire or retired from a top company? Amitabh did not give up and in fact his family is his biggest cheerleader now.

Amitabh was also the 2015 Winner of the Prince's Prize for Innovative Philanthropy, conferred by HSH Prince Albert II of Monaco wherein Jack Ma of Alibaba Group was a semi-ﬁnalist.  In 2018, he was conferred the title of Sri Lankan Peace Ambassador by Center of Peace Studies.  He is a celebrated inspirational speaker on Kindness, Gratitude & the power of Self-belief and has been winning hearts with his presence at Ted Talks, Yale, Wharton, YPO/WPO, United Way's Million Dollar Roundtable, amongst others.  He is the 2019 - Iconic Youth Award recipient by Rotary International for mobilizing youthful energy & bringing lasting change in education institutions. National Award Winning Film Director, Rakeysh Omprakash Mehra, along with Gulzar & Shankar Ehsan Loy made a film inspired by Yuva’s grassroots efforts – Mere Pyare PM about an 8 year old wanting to make a toilet for his mother.  Amitabh will not stop till they transform 10,000 schools and lives of 5M children in the next 5 years.

Some words of Appreciation from Industry Leaders:

Yuva Patron, MD of Dilip Piramal said: “My many congratulations to Yuva and Amitabh for this Brilliant Honor. This is a great recognition for India and more corporates should be inspired to join Yuva’s cause of upgrading schools.”

Mohit Burman, Director of Dabur & Yuva’s Advisory Board member: “Yuva’s work is not about building sanitation in schools, it is about building India.”

Dilip Cherian, Founder Perfect Relations & Yuva’s Advisory Board member said: “We have touched 1000 schools, and we are just getting started.”

Nasser Kazeminy, Chairman of Ellis Island Awards:  “We salute and admire the work Amitabh is doing in education and children for India.”