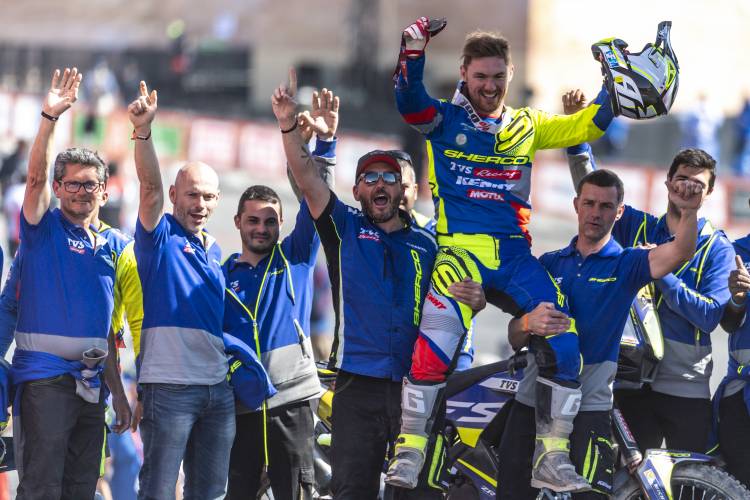 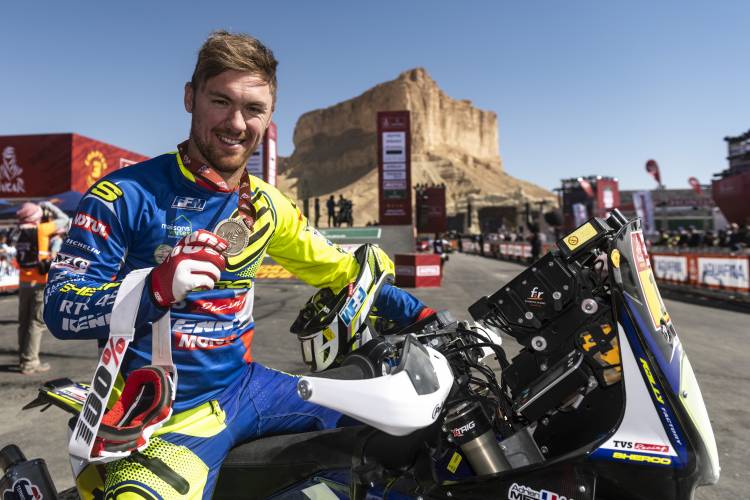 As the world’s biggest and toughest off-road endurance Rally, the Dakar Rally 2020 comes to an end, the Sherco TVS Rally Factory Team celebrates the team’s exemplary performance this year. The French rider, Adrien Metgereached a noteworthy ranking by finishing the final stage of the Rally at position #7, owning to his consistent performance throughout Dakar. This is Adrien’s 5th appearance at the Rally, where he recorded his overall position at #12.

Indian entrant and Dakar Rally debutant, Harith Noah put on display a commendable performance at the 42nd edition of the Rally. Despite not being eligible for overall ranking, Harith had participated in the Dakar Experience category since Stage 4, due to facing a technical difficulty post Stage 2, and ended the final
Stage of Dakar Rally 2020 at position #27. Harith is considered as one of the brightest talent from India and has shown tremendous performance in other international rallies.

Commenting on the team’s achievement,B. Selvaraj, Team Manager, TVS Racing said, “Dakar Rally in its core element puts to test the most basic yet important skills of a rider. This time around, the setting in Saudi Arabia and overall ride routes were new to the riders, making it tougher and bigger than before. I would like to congratulate each of our riders for the camaraderie that they demonstrated through the Rally. Adrien put his experience into apt use which reflected in his steady performance chart from the start till the end, thereby helping him finish at a remarkable ranking. I would also like to congratulate Harith for his outstanding performance in his first Dakar Rally experience. Despite not being eligible for general ranking, Harith completed every stage at notable ranks. While Lorenzo and Johnny couldn’t continue their Rally due to injuries, I would like to extend our heartfelt gratitude for their performance during the Dakar Rally 2020.”

Commenting on his achievement, Adrien Metge said, “I am happy that I got a chance to participate at the Dakar Rally this year and extremely humbled about my result. Saudi Arabia is a very beautiful country with a variety of terrains to ride on, which makes for a nice rally experience. It was quite a long one and I made my share of navigational mistakes from time and again however, I was able to perform well on my motorcycle which glided through all these terrains with ease. Lastly, I would like to thank the team for keeping the spirits high throughout.”

Harith Noah said, “I can definitely say that these were the longest and hardest two weeks. I can’t say that I completed the Rally, however, I did complete every stage but one, under Dakar Experience Class, so it’s definitely something good to take home. I had a great experience despite not knowing what to expect or what not to expect, which also provided me with some great learnings every day. I made a navigation mistake and had a bad crash during Stage 1 which was a big learning in itself. I rode better from then on, and will be much better prepared for next year.”

Thomas Teissier, General Manager, Sherco Motorcycles said, “It was quite an interesting Dakar for all in Saudi Arabia; it was fast as we saw, which led to a lot of crashes and casualties throughout the Rally. All the riders took time to adjust to the terrains, but eventually understood the riding dynamics in the dunes and sandy hills of the country. This gave us a great opportunity to understand the terrain and prepare for the Dakar Rally next year.”

Lorenzo Santolino (Spain) and Johnny Aubert (France) had to exit the Rally after Stage 9 and Stage 6 respectively due to accidents. Both Lorenzo and Johnny exhibited consistent performances from the beginning of the Rally, and recorded outstanding stage rankings. While Lorenzo Santolino made his second appearance at Dakar Rally, the team welcomed Johnny Aubert this year, who finished 6thin Dakar 2018 bringing with him 35 years of racing experience.

Dakar Rally 2020 was the 42nd edition of the annual international Rally-Raid which tookplace in the dunes of Saudi Arabia. A journey through unknown landscapes, unexpected challenges, untold stories and unbelievable memories, commenced at Jeddah passing through Riyadh and culminated at Al Qiddiya, this was Sherco TVS Rally Factory Team’s sixth consecutive year of participation in the Rally.

About Sherco TVS Rally Factory Team
In 2015, TVS Racing became the first Indian factory team to take part in the Dakar Rally by forging a partnership with Sherco. Both the teams connect over their passion for bikes and since then has emerged as a global brand in motorsports. Together they provide international quality training to racers and technicians and their expertise on racing technology has made them unstoppable. Throughout the year, the team participates in Rallies like Rally of Morocco, PanAfrica Rally, Baja Aragon, Merzouga Rally, and Dakar Rally. The team recently won Baja Aragon Rally 2019 held in Spain.

About TVS Racing
Since the past 37 years TVS Racing has been actively participating on and off-road racing events such as road racing, Super-cross and Motocross, Dirt Tracks, Rally etc. TVS Racing is the only factory team in India to have any woman racer as a part of their team. In early 2015, TVS Racing became the first Indian factory team to take part in the Dakar Rally, which is the longest and toughest Rally in the world. TVS Racing won 15 championships across all forms of two-wheeler motorsport events Supercross, Rallies and Road racing last year.

Outreach on economy, demand push to give big boost to growth:ASSOCHAM