Sri Shakthi SAT to be launched by ISRO ISRO is to launch satellite created by students. 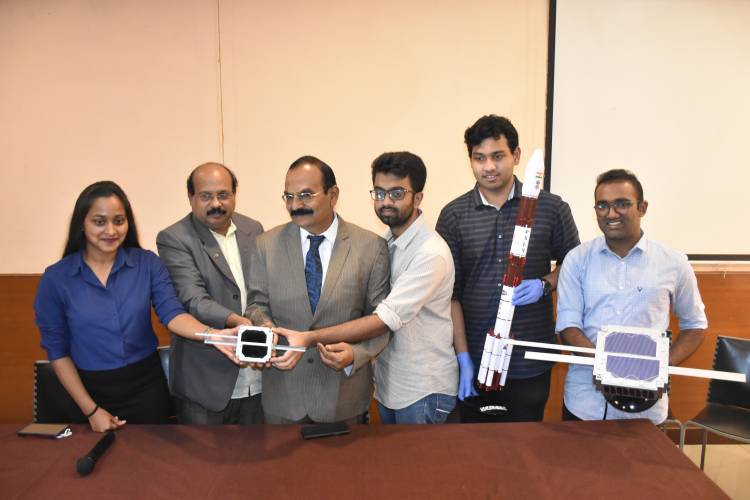 Sri Shakthi SAT to be launched by ISRO ISRO is to launch satellite created by students.

Sri Shakthi SAT to be launched by ISRO

ISRO is to launch satellite created by students.

Sri Shakthi Institute of Engineering and Technology  institutions is all set to launch its own working satellite .

Sri Shakthi Institute of Engineering and Technology is set to launch its own satellite  on February 28, 2021 . The PSLV c-51 satellite named  SRISAKTHI SAT worth Rs 2 crore will be launched from ISRO, Sriharikota .

Talking about this, The Chairman and Head of the Institution Dr S.Thangavelu  said that the students and the teachers have fulfilled their long cherished dream of having created their own satellite .

From 2010 onwards, our students and teachers with their efforts set up a research center and have also strived to build their own   satellite.

In order to inspire the younger generation and to add value the country’s scientific and industrial temper, Our Prime Minister launched an initiative called IN-SPACE facility along with ISRO in June 2020 at Bangalore. This has been created for private industries, educational institutions to be benefitted in their future endaevours and to be associated with  ISRO .The single window system approach  helps to accommodate wireless facility, registration programs before the launch of the satellite  and  the permission for the launch through PSLV has been made accessible and this has made us relish our 10 year dream to be fulfilled.

The team comprising of Research scholar, Nikhil Riyas along with three Professors and 12 students working under their surpervision has helped us enter into a new chapter in space research.

As of November 2019, there are more than 300 satellite ground stations which are in operation and are active of 810 transmitters and more than 380 satellites which have been monitored through SATNOGS.

Our PICO satellite weighs only about 460 gms but has the capacity to operate like other 10 kg heavy Nano satellites. This will be a Low Earth  orbit (LEO) satellite as it revolves at 500-575 km from the ground level, said Dr. Thangavelu.

This satellite will be useful and provide information through IOT ( Internet of things) and be the interface that happens in space.

This will serve to overlook many operations as much as the remote and the smartphones which are used widely today for  regulating and monitoring.

TVS Motor Company, a reputed manufacturer of two-wheelers and three-wheelers in...

China's manufacturing activity fell to its lowest level on record in February as...

Naturals Salon launch their very own Safety Kits with Purple...

Naturals Salon has been a name to reckon with for years, and have always aimed at...