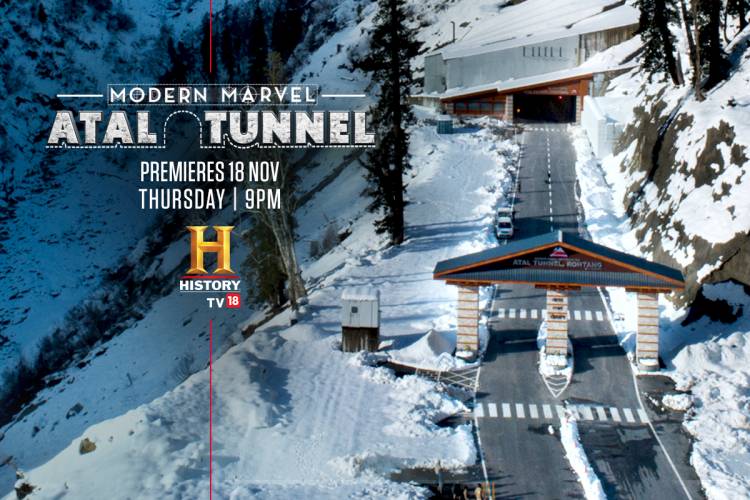 India, 15h Nov’2021:  HistoryTV18’s latest documentary, ‘Modern Marvel: Atal Tunnel’, is the awe-inspiring story of the indomitable human spirit and the wonders of modern engineering. A never-before-seen chronicle of a world record setting feat, created in some of the harshest conditions on the planet.

Piercing through the Pir Panjal range in India’s Western Himalayas, the nation’s newest man-made marvel was dedicated to the nation on the 3rd of October, 2020.  It’s the longest high altitude highway tunnel in the world. At over 10,000 feet above sea level, the 9.02 KM tunnel and road-link, connects Leh, in strategically sensitive Ladakh, with Manali via Keylong in Himachal Pradesh. For nearly seven months a year, heavy snowfall would deny access beyond the treacherous Rohtang Pass. Also known as Rohtang-La, meaning Pile of Corpses in the local dialect, the high mountain pass has earned its name from the many lives it has claimed over the centuries. Now, the all-weather route created by tunnelling under the Pass brings much-needed connectivity to the people of Himachal’s Lahaul and Spiti. The twin valleys hitherto remained cut off from the rest of India for months on end. Now these vast areas and their people are within reach all year round.

The idea of the tunnel took shape at the turn of the millennium, after a meeting between India’s Prime Minister at the time, Atal Bihari Vajpayee and his childhood friend Arjun Gopal, a resident of Lahaul. But it would be many years before the project was operationalized.

Tunnelling at 10,000 feet high up in the Himalayas, braving blizzards, avalanches, and nature’s unforeseeable fury was not just ambitious, it had never been attempted before anywhere in the world. But that is exactly the kind of mission that the Border Roads Organisation (BRO), a specialized arm of the Indian Armed Forces, was raised to undertake.  Since 1960, the BRO has been responsible for connecting India’s far-flung corners and remote frontiers. Constructing the Rohtang Tunnel, as it was then called given its location, and the new highway running through it were the mission objective.  Given India’s growing national security concerns and defence needs, failure was never an option.  After a decade of soldiering on, through unprecedented challenges in some of the world’s toughest terrain, the high-altitude tunnelling project was finally completed.

HistoryTV18’s action-packed half-hour show, uncovers the little-known facts, shining the light on the enormity of the endeavour and what it took to accomplish the mission. The documentary showcases the triumph of the never-say-die spirit in this untold Himalayan odyssey.

The show’s narrative captures the trials and the setbacks - from a collapsed roof to torrential flooding and the roadblocks posed by the pandemic. Braving nature’s unrelenting onslaught and a great many odds, the project’s 750 officers, engineers, geologists, seismologists, drilling experts and over 3,000 workers prevailed, turning the dream into reality.

Speaking about the importance of the tunnel, Defence Minister Rajnath Singh says, "Strategically and for its national importance, the tunnel is a blessing for our country. Along with its economic benefits, the tunnel also has great importance from a social perspective.” The documentary also features Defence Secretary, Ajay Kumar and BRO Director General, Lt. Gen. Rajeev Chaudhry, who provide valuable insights. The Atal Tunnel project’s Chief Engineer, KP Purushothaman shares a first-person account of what transpired hundreds of metres inside the mountain. Archival images and footage from the construction site enrich the narrative, while aerial footage of the mesmerizing snowscapes, filmed in 4K and high definition provide the daunting backdrop against which the story unfolds.

Speaking about the programme,  Avinash Kaul, Managing Director - A+E Networks | TV18  and CEO-Broadcast for Network18, says,  with ‘Modern Marvel: Atal Tunnel’ the team at HistoryTV18 continues to deliver riveting originals, with top-notch production values and exemplary storytelling that bring to life India’s stories that are as important historically, as they are entertaining and engaging. The Atal Tunnel is undoubtedly one of the great Modern Marvels of 21st century India, in its making we have witnessed the making of history. We’re proud to have had the opportunity to tell its remarkable story.”

Watch ‘Modern Marvel: Atal Tunnel’ on 18th November at 9PM, only on HistoryTV18 and HistoryTV18 HD.

Shubham Jain joins CredAvenue to set up and lead its Infrastructure and Real Estate...

IAF trounces Telangana XI by 8-1 in the first match at...

With growing cardiac concerns among youngsters ........

But there were many interesting stories too. .......

Chariot from Tamil Nadu for Rama Navami Celebrations at...

The wooden chariot built in Tamil Nadu is all set to go around the streets of Ayodhya...