A webinar on childhood obesity To save millions of children from obesity India needs strong warning labels on packed food: experts 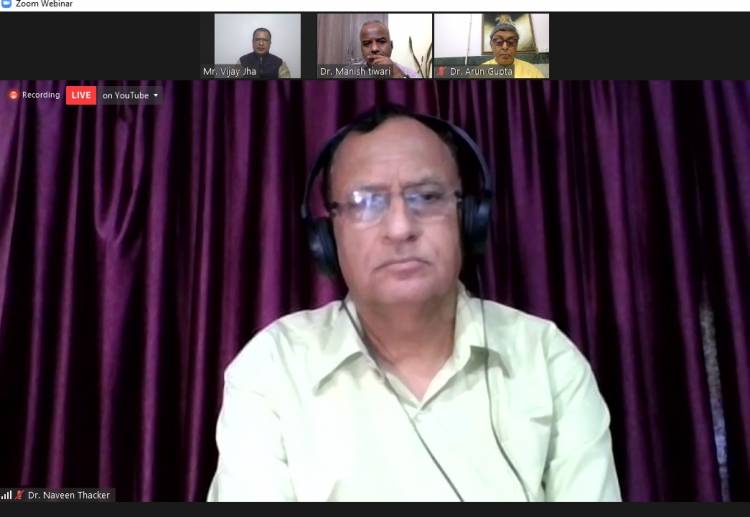 A webinar on childhood obesity To save millions of children from obesity India needs strong warning labels on packed food: experts

A webinar on childhood obesity

To save millions of children from obesity India needs strong warning labels on packed food: experts

- With more than 14.4 million obese kids ,India has the second highest number of children with childhood obesity in the world and likely to swell to 17 million by 2025

New Delhi, 30th June, 2021:With more than 14.4 million obese kids, India has the second highest number of children with childhood obesity in the world. This number is likely to swell to 17 million by 2025, if the government does not intervene urgently to fix scientific limits and labelling for salt, sugar, saturated fats and other harmful ingredients in packaged and ultra-processed food and beverages, public health experts and doctors have warned.

Participating in a webinar on ‘Challenge of Child Obesity and Packaged Food during Covid pandemic in India,’ they also demanded front of pack labels (FOPL) on these products to ensure that parents make an informed choice before giving them to their kids to eat.

He explained that "along with tobacco, alcohol and physical activity, an unhealthy diet is strongly linked with NCDs, which are a major challenge in India.”

Recently, the World Health Assembly (WHA) globally agreed framework for evidence-based cut-offs for anti-nutrients like sugar, salt and saturated fat present in packaged food. “In India, there are many guidelines related to consumption of foods and drinks for children, but there is a need for policy recommendations and implementation,” said Dr Thacker even as he asserted on making right to have healthy food a public movement.

In Corona times, the obesity has increased among children due to lifestyle changes; their physical activities are restricted to bare minimum due to lockdown restrictions and closure of schools. It’s time that the government introduces front-of-package labelling (FOPL). Lip service will not help, he asserted.

World Health Organisation (WHO) has identified FOPL as "one of the policy tools that can support healthy diets." So far 11 countries across the world have enacted laws making FOPL mandatory. India is still holding consultations with various stakeholders to find a viable model, he added.

Dr Arun Gupta, pediatrician and ex-member of the Prime Minister’s Nutrition Council too made strong case for tightening the noose around the food industry. “There are various studies that shows that 10 per cent increase in the consumption of Ultra processed food increases the chances of obesity, diabetes, cardiovascular diseases and certain types of cancer by approximately 10%.

"Children are particularly at risk. It is not good to blame people always that they are not eating right food. The government and food industry should be held accountable to safeguard children and enable a nutritious food system for them. For this, strong legislation backed by the will to implement is needed," he asserted.

"We need to set evidence-based limits on the high concentration of salt, sugar and fats in packaged foods so families have clear guidance when buying these products," he added.

Senior journalist Mr. Vijay Jha opined that there was a need to curb marketing strategies of the food industry while the government should come out with strong legislations and create awareness among people about the health hazardous of the junk food.

As per the Burden of Packaged Food on School children, based on Centre for Science and Environment (CSE) survey Know your Diet Study (2017), 53% children consumed salted packaged food such as chips and instant noodles at an average of over twice a week.

Global researches have proved that the packaged food, without sufficient and adequate warning labels has been dangerous and tends to increase the consumption of salt, sugar and saturated fat.