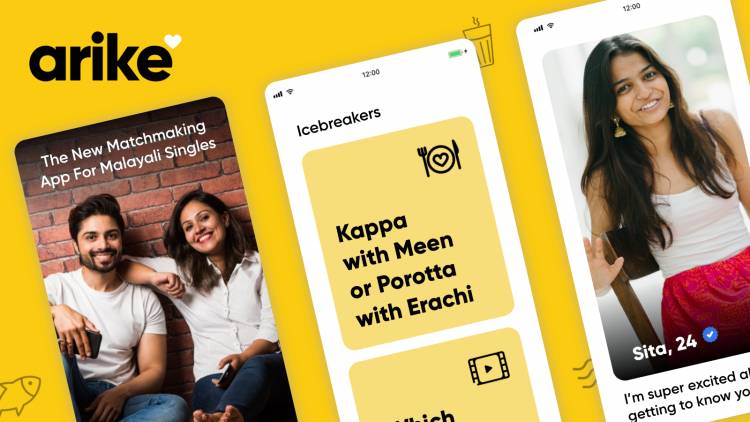 Thiruvananthapuram: Aisle, India’s second most downloaded dating app and a market leader in high intent dating has launched its vernacular dating app ‘Arike’, for Malayalees residing in and out of India. Arike which means ‘close by’ in Malayalam is the first ever vernacular dating app in India and is designed to offer high intent matchmaking to the youth of Kerala. Arike is Aisle’s first step towards building a vernacular dating landscape by offering users a customised app suited to a region's culture and habit.

The way love works in India is quite different from other parts of the world. People in India are very specific about faith, religion, language etc. before choosing a potential partner. With Arike, Aisle aims to solidify its learnings of Indian romance by starting to build a category of vernacular dating apps.

Arike is exclusively designed for the Malayalam speaking audience between the age group of 21-40, however it does not have any geographical boundations. It has features which are culturally specific to Malayalees, starting from a logo which is inspired by the first letter of the Malayalam language icon. Everything on the app is designed to suit the local geography including Malayalee icebreakers around food/movie choices and references to Kerala’s pop culture. To replicate Aisle’s value proposition of high intent matchmaking, digital goods like the number of free likes on Arike are scarcer than Aisle. However, members can purchase 'notes' and express their interest in other members by writing to them directly.

Speaking about the launch, Able Joseph, Founder and CEO, Aisle said, “We've been building Aisle for over 6 years and are the only Indian dating app to make it in the top 5. We understand desi romance. Our data suggests that Kerala is among the top states that find value in high-intent dating and that is how the idea of Arike, a high intent dating app for people of Kerala came to be. The launch of Arike will continue to shape Aisle’s global presence as we hope to see cross border Malayalee matchmaking come to vision. Kerala is just the start, we are planning to launch versions of Arike across India in multiple states personalized to that region's culture and habits”.

Aisle is an app that connects people of Indian-origin from around the world, who are looking for serious relationships. Amongst the top 5 grossing dating apps in India, Aisle is the only brand built by Indians and it competes with billion-dollar companies like Tinder, Bumble etc. Aisle recently closed its pre-Series A funding round, led by Anas Rahman, Founder & MD of Hurun India, and Vinod Jose, Founder of Konglo Ventures and other angel/existing investors. During the lockdown, Aisle also integrated interact before matching feature, ‘Rooms’ on its app which allows individuals to host a virtual room and begin an audio conversation with any other interested user. Aisle has recently launched its premium feature ‘Concierge’ with an aim to offer curated matchmaking to users by browsing through a collection of handpicked profiles all in one place.

Tendulkar's donation is so far the biggest contribution among India's leading sportspersons,...

The National Spokesperson and AIADMK .....