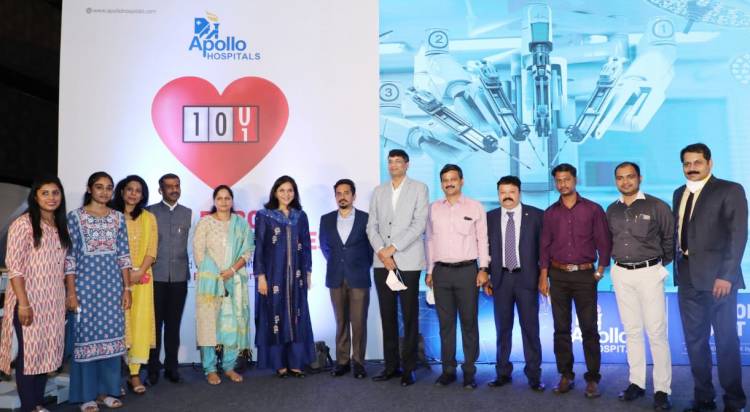 Hyderabad, September 6th 2021: Apollo Hospitals Bangalore announced the successful completion of 100 robotics cardiac surgeries at its dedicated Robot-Assisted Cardiac Surgery Unit; a milestone in the history of cardiovascular surgery in the country. The hospital also announced that the team had performed a Complex Mitral Valve surgery using robotic-assisted minimally invasive cardiac surgery with the da Vinci robotic system in under 70 minutes, a landmark achievement in interventional cardiology.

Dr. Sathyaki Nambala, Sr. Consultant, Cardiothoracic and Vascular Surgeon and HoD, Robotic Cardiac Surgery Unit said, "Cardiovascular diseases tend to affect patients in the most productive years of their lives result in catastrophic social and economic consequences. The establishment of a Robot-Assisted Cardiac Surgery program requires a tremendous amount of dedication and preparation, and we are proud to be India's first hospital to complete 100 robotic cardiac surgeries since the program's inception in late 2019. In comparison to traditional open-heart surgery, which involves opening up the chest by splitting the breastbone, the da Vinci Xi's innovative technology allows for complex cardiovascular surgeries to be performed through smaller incisions and precise motion control.

"In addition, a high-definition camera provides a clear, 3D view of the chest to the surgeon on a console screen. With the help of the system, we were also successful in conducting the fastest Robotic Complex Mitral Valve repair in under 70 minutes as opposed to the global benchmarks. We hope to achieve more such milestones in the near future."

Robotic cardiac surgery is a minimally invasive procedure that helps patients return to their everyday life much faster than open-heart surgeries. Surgeons use the da Vinci Surgical System to operate through 8 mm holes called ports and a magnified 3D high-definition vision as well as tiny wristed instruments that bend and rotate much more than the human hand aid in surgery. As a result, surgeons have better vision, precision, and control. Other benefits include decreased pain, fewer post-operative wound infections, less post-operative scarring, and improved breathing. Recovery is rapid, with lesser hospitalisation, faster mobilisation and rehabilitation. Reducing the chance of infection makes it an ideal procedure for people with diabetes and older patients.

Dr. Sangita Reddy, Joint Managing Director, Apollo Group of Hospitals said, " Our goal has always been to bring the most cutting-edge medical technology to India for the benefit of our patients. We want more patients to benefit from the most advanced surgical and medical care available at our hospital. The da Vinci Surgical System has assisted us in providing the best possible surgical outcomes, and the completion of more than 100 successful robotic cardiac surgeries attests to our commitment to providing the most recent and highest quality of care. The patient is at the heart of all our efforts at Apollo Hospitals to provide accessible and affordable world-class treatment, and the addition of the da Vinci Xi robotic surgical system is a step toward that goal. We are confident that by achieving the two milestones of 100 surgeries and performing the robotic complex mitral valve repair in under 70 minutes, we will change the lives of many more patients who cannot undergo conventional cardiac surgery.”

Commenting on this, Mandeep Singh Kumar, VP and General Manager, Intuitive India, said, "It gives us great pleasure to be part of this exemplary milestone of 100 successful robotic-assisted cardiac surgeries. At Intuitive, we believe technology should enhance a surgeon's ability to perform complex procedures with ease and help improve clinical outcomes. Surgeons today are increasingly vouching for robotic-assisted surgery and the da Vinci system for its potential to enhance precision, improve visualisation, flexibility, and its potential to improve clinical outcomes. The dedicated Robotic Cardiac Unit at Apollo (Bengaluru) is one amongst the very few such centres globally that provide robotic cardiac surgery as a treatment option. That coupled with Dr. Sathyaki's expertise in minimally invasive cardiac surgery is a true testament to the world-class standards set by the organisation and its care teams. It also speaks highly of Apollo’s ongoing commitment to leveraging the power of technology towards providing quality care. We are proud of our association with the Apollo Group of Hospitals towards making robotic-assisted surgery accessible to the greater patient community."

Cardiovascular diseases (CVDs) have overtaken cancer as the leading cause of death in India. This epidemiological shift is primarily due to an increase in the prevalence of cardiovascular diseases (CVDs) and cardiovascular risk factors in India. According to studies, the estimated prevalence of CVDs in India in 2016 was approximately 54.5 million, with 1 in 4 deaths in India being caused by CVDs, with ischemic heart disease and stroke accounting for more than 80% of this burden.

According to a study published in The Lancet Global Health, Indians now have one of the highest rates of mortality after a heart failure diagnosis, higher than people in several developing countries around the world. According to the study, heart failure patients in India had one of the highest mortality rates after one year of diagnosis, at 23%. This was higher than the mortality rates in Southeast Asia (15%), China (7%), South America (9%), and West Asia (3%). (9 percent). The study also found that heart failure patients in India, Africa, and Southeast Asia were about ten years younger than patients in developed countries like the United States and Europe.

It was in 1983, that Dr. Prathap C Reddy made a pioneering endeavour by launching India’s first corporate hospital - Apollo Hospitals in Chennai.

Now, as Asia’s foremost trusted integrated healthcare group, its presence includes over 12,000 beds across 72 Hospitals and 4100 pharmacies, over 120 Primary Care clinics and 650 Diagnostic centres, 700 plus Teleclinics, over 15 medical education centres and a Research Foundation with a focus on global Clinical Trials. The most recent investment being the commissioning of South East Asia’s very first Proton Therapy Centre in Chennai.

Every four days, the Apollo Hospitals Group touches a million lives, in its mission to bring healthcare of international standards within the reach of every individual. In a rare honour, the Government of India had issued a commemorative stamp in recognition of Apollo's contribution, the first for a healthcare organization. Apollo Hospitals Chairman, Dr. Prathap C Reddy, was conferred with the prestigious Padma Vibhushan in 2010.

For 37 years, the Apollo Hospitals Group has continuously excelled and maintained leadership in medical innovation, world-class clinical services and cutting-edge technology. Its hospitals are consistently ranked amongst the best hospitals in the country for advanced medical services.

Get Your Groove On This Friday at ‘Black Orchid’, ft. DJ Michael Timothy

China's manufacturing activity fell to its lowest level on record in February as...

Ministry of Health Announces Tamil Nadu to be the pioneering...

Ministry of Health Announces Tamil Nadu to be the pioneering state in the country...