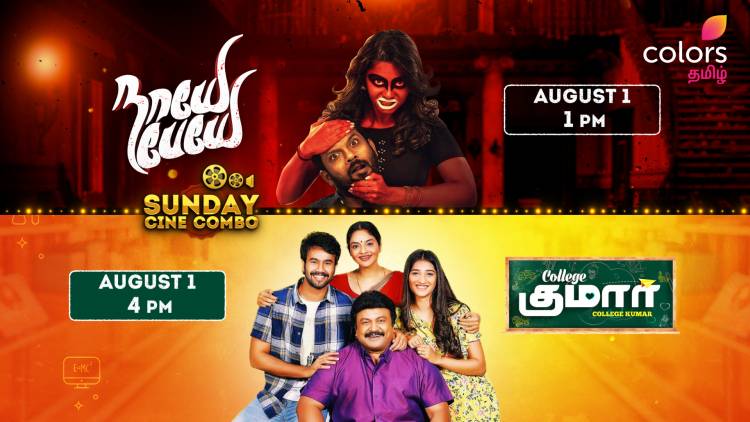 ~Tune in to Colors Tamil this Sunday, 1st August at 1 PM and 4 PM to catch the premieres ~

Chennai 29th July 2021: Get ready for a fun-filled Sunday as Colors Tamil, the youngest GEC of Tamil Nadu, prepares to captivate you with the World Television Premieres of two highly lauded films, Naaye Peyae and College Kumar. These movies, with interesting narratives across genres as diverse as horror-comedy and social drama, will be screened as a part of Sunday Cine Combo, are sure to keep the audiences glued to their screens this weekend. Tune in to watch these fun-packed entertainers only on Colors Tamil on Sunday, August 1st, at 1.00 p.m. and 4.00 p.m.

Naaye Peyae, a 2021 horror comedy film, directed by Shakti Vasan, stars Aishwarya, Dinesh Kumar, Aadukulam Murgadoss, and Sayaji Shinde in key roles. This gripping thriller follows Karna (played by Dinesh Kumar) and his friends as they kidnap a girl named Karina (played by Aishwarya), who they later discover is a ghost. The rest of the film comprises of what happens after that, making it a perfect comedy feast with some amazingly funny and thrilling moments.

College Kumar is a remake of the 2017 hit Kannada movie by the same name. The story revolves around the ambitious dream of a peon, Thirumurugan (essayed by actor Prabhu), who dreams of making his son a successful auditor after being insulted by his boss. With a famed ensemble star-cast including veteran actor Prabhu, alongside Madhoo, and Nasser, the story takes an unexpected turn when his son Shiva Kumar (Rahul Vijay) is expelled from college after being accused of malpractice. The plot revolves around Thirumurugan's quest to realise his desire.

About Colors Tamil: Launched in February 2018, COLORS Tamil is the youngest general entertainment channel from the stable of Viacom18 that thrives to entertain the Tamil speaking viewers around the globe through distinctive and powerful stories that inspire and celebrate women and their families. Positioned as IdhuNammaOruColoru (the colors of our motherland), COLORS Tamil focuses on storytelling that matches the rich heritage of the Tamil Nadu culture with qualitative and innovative programming. Some of our flagship shows are Velunachi, Arya’s EngaVeetuMaapilai, Dance Vs Dance, COLORS Comedy Nights, Singing Stars, Oviya, VandhalSridevi, Perazhagi, Thirumanam, Thari, Malar, Kalla Petti, Kodeeswari, Uyire, Amman, IdhayathaiThirudathey, MangalyaSandhosham& Colors Kitchen amongst others.

About Viacom18:  Viacom18 Media Pvt. Ltd. is one of India’s fastest growing entertainment networks and a house of iconic brands that offers multi-platform, multi-generational and multicultural brand experiences. A joint venture of Network18, which owns 51%, and ViacomCBS, with a 49% stake,Viacom18 defines entertainment in India by touching the lives of people through its properties on air, online, on ground, in shop and through cinema.

Wheels Wisdom brings its Personalized Car Services to the...

Two Indian-origin women have been appointed as judges to the criminal and civil...

Let’s Get It Right! Young Daters in India Share Tips to...