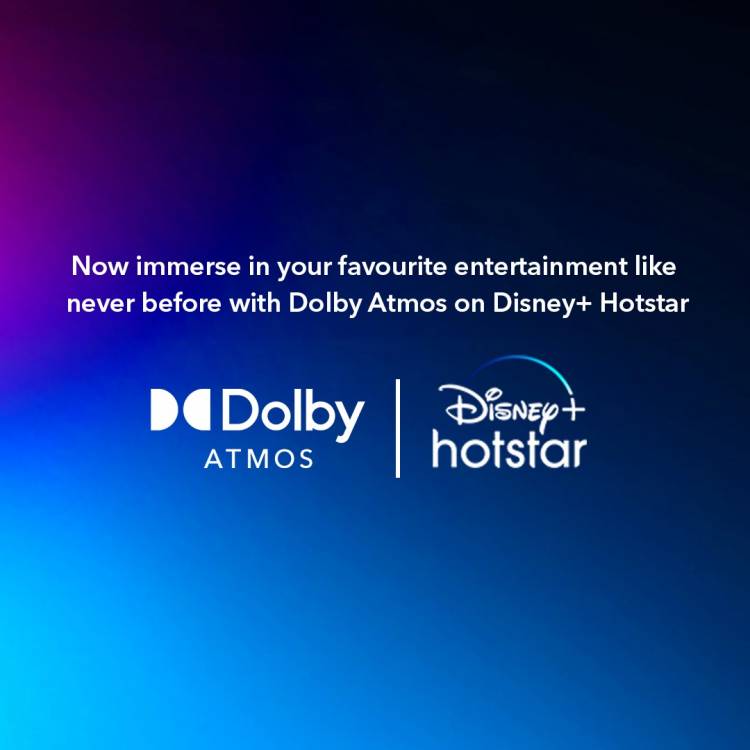 Since the launch of Dolby Vision in July 2020, the crisp details and deep contrast of Dolby Vision HDR enabled the users of Disney+ Hotstar to catch every emotion flickering across a character's face in a dark night shot. Now with the multidimensional, spatial sound experience of Dolby Atmos, Disney+ Hotstar puts its users in the middle of the action with stories coming alive all around them.

Commenting on the development, Sidd Mantri, Head of Product - Developing Markets, Disney Streaming, said, “We have collaborated with Dolby on numerous occasions, to bring the latest in technology and innovation on the platform. Disney+ Hotstar users have already enjoyed millions of hours of content in Dolby Vision. We are delighted to add Dolby Atmos spatial audio to further amplify the best-in-class entertainment experience on Disney+ Hotstar. What excites us most, is the differentiated headphone experience we have now delivered to Dolby Atmos-enabled devices (including mobile) for a truly superlative experience on-the-go. We look forward to collaborating with Dolby and continue pushing the boundaries to deliver cutting edge innovation to our users.”

This feature is available to all of the platform’s users. Some of the popular Disney+ Hotstar titles now streaming in Dolby Vision and Dolby Atmos include Home Shanti, Rudra: The Edge of Darkness, November Story, Human, Grahan, The Great Indian Murder, Aarya, Shoorveer, Masoom, Ghar Waapsi, Out of Love, Special Ops 1.5, Vikram, Kaathuvaakula Rendu Kaadhal and A Thursday. Additionally, new titles from Hotstar Specials and Multiplex will also have Dolby Atmos.

Dolby Vision and Dolby Atmos on Disney+ Hotstar are designed to automatically adapt to one’s compatible device to give them a premium entertainment experience, no matter what they’re watching. The user can easily locate content in Dolby on the Disney+ Hotstar app by looking for the ‘Dolby badge’ on the title listing page.

About Dolby Laboratories
Dolby Laboratories (NYSE: DLB) is based in San Francisco with offices in over 20 countries around the globe. Dolby transforms the science of sight and sound into spectacular experiences. Through innovative research and engineering, we create breakthrough experiences for billions of people worldwide through a collaborative ecosystem spanning artists, businesses, and consumers. The experiences people have – with Dolby Cinema, Dolby Vision, Dolby Atmos, Dolby Audio, Dolby Dimension, and Dolby Voice – revolutionize entertainment and communications at the cinema, on the go, in the home, and at work.

About Disney + Hotstar
Disney+ Hotstar is India’s leading streaming platform that has changed the way Indians watch their entertainment - from their favourite TV shows and movies to sporting extravaganzas. With the widest range of content in India, Disney+ Hotstar offers more than 100,000 hours of TV Shows and Movies in 10 languages and coverage of major global sporting events.

Learn the art of cooking from Master of Spices - Sanjeev...

Calling all food aficionados to master ........

ICICI Bank today announced the launch of a facility that empowers customers to get...

TVS Motor Company Sales in May 2020

TVS Motor Company resumed its operations in India across all its factories in Hosur,...