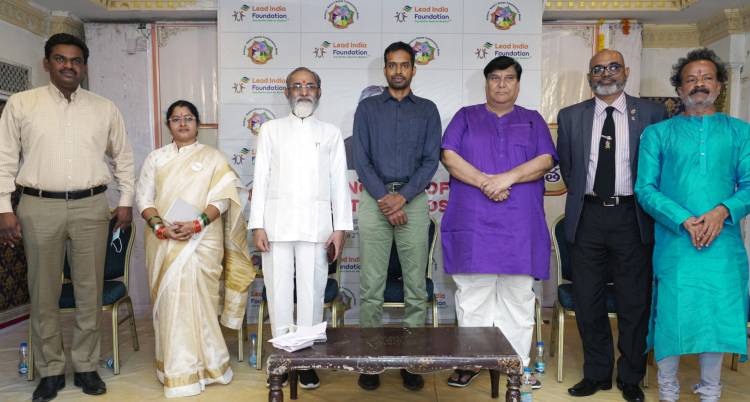 Lead India Foundation was founded by Dr. N.B. Sudershan Acharya, in 2004 under the guidance and personal mentorship of Dr. APJ Abdul Kalam. Over the last 17 years, the Foundation has transformed lakhs of Indian youth into leaders through its unique tried and tested Acharya Kalam’s inspirational program, “Aap Badho Desh Ko Badhao” (ABDB).

Dr. Pullela Gopichand, speaking on the occasion said, Lead India Foundation’s initiative Aap Badho Desh Ko Badhao, has been inspiring several youths as a guiding light in their endeavor to be ideal citizens of the country. To expand its reach and benefit many more youth, Lead India Foundation is starting Lead India National Clubs, these clubs should help multiply the effort and bring about a revolution.

Dr KV Ramanachary said, I have seen Dr Abdul Kalam from very close quarters, he was an inspiration for me, and many others and I always longed to listen to him speaking on varied subjects, in fact I had invited him to TTD when I was in Tirupati to address children and later again to address the youth at LB Stadium in Hyderabad. Today on his death anniversary remembering him and garnering inspiration from his life and times is in itself motivating.He was no ordinary man, a god gifted icon who was sincere, honest, courageous and inspiring to others, he was a role model in a true sense. Lead India should serve to steer the youth of the country in his path and fulfill the dream India he longed for.

Dr. N.B. Sudershan Acharya said, as a chief mentor Dr Kalam was an inspiration for all of us. Since 2004 Lead India Foundation has been guiding youth to a righteous path along with the institutional education through Aap Badho Desh Ko Badhao initiative. Especially to eradicate poverty, Lead India Foundation has made this a part of Government Schools curriculum for the last 17 years, till date we trained approximately 18 lakh students. Now we want to reach out to 20 crore students by 2030 and through them change the society and the country.

Major(Retd.) Madhukar Katragadda said, we are born with a divine fire in us, our efforts should be to give wings to that fire and fill the world with the goodness of the fire, Dr Kalam said in his book Wings of Fire. Lead India Foundation is here today to ignite the fire in the nation, to be able to take that goodness to everyone in India and across the world. Lead India Foundation is here to make the dreams of Dr Kalam true, it is a huge responsibility and will work towards accomplishing it. Lead India Foundation has a very big responsibility & objective, a dream by itself, transform 20 crore Indian youth by 2025 and transform India into a developed nation by 2030. It’s possible through our initiative of a network of Lead India Clubs across the country. In the next two years in the Telugu states itself we will establish 1300 Lead India Clubs at the Mandal level.The objective of the 2nd National Movement initiated by Dr. APJ Abdul Kalam in 2004 through Lead India Foundation, was to groom youth to lead India and make it a developed nation and a world leader. We are confident to accomplish this humongous task and fulfill one of the most endeared Indian President’s dreams, by leveraging IT and the POST COVID work from anywhere attitude.

Dr. Lakshmi, ENT, Sri Sai Poly Clinic Hayathnagar; said, the mission to transform the nation should begin from each home, each child should be groomed to be in tune with AapBadhoDesh Ko Badhao and change the country and the world.

Mr. Ravindra Chintala, Secretary General, Lead India Foundation; said, the objective of AapBadhoDesh Ko Badhao is to instill right human values at an young age in children, for them to blossom into good citizens.

Lead India Foundation has set sight on an ambitious endeavor to transform a minimum of 20 crore IndianYouth into ideal citizensby 2025, through its ABDB human transformation training programs.Through this youth capital, the Foundation aims to work towards transforming India into a developed nation by 2030. To achieve this objective, Lead India Foundation has embarked on the task of establishing LEAD INDIA NATIONAL CLUBS (LINCs) in every Mandal across India, state by state and district by district. The maiden Lead India National Club Karimnagar chapter was inaugurated on 26th July 2021, taking inspiration from Kargil Vijay Diwas,as a tribute to the supreme sacrifice of our armed forces.

During the years 2021 and 2022 Lead India Foundation, plans to create a model network of LEAD INDIA NATIONAL CLUBS in the Telugu speaking states of Telangana and Andhra Pradesh and thereafter expand this model network to other states. The members of Lead India National Clubs will mandatorily go through the Acharya Kalam’s ABDB Human Transformation training program and help disseminate the benefits of this training to communities around them. Through this initiative, Lead India Foundation is confident of creating a dedicated cadre of 15 Lakh LINC member base across India and leverage the strength of this cadre to bring the desired transformation among 20 Crore Indian youth over the next 5 to 10 years.

Anita Hassanandani, the popular actor and new-mom in town,...

Over 80% newly diagnosed diabetic patients in India have...