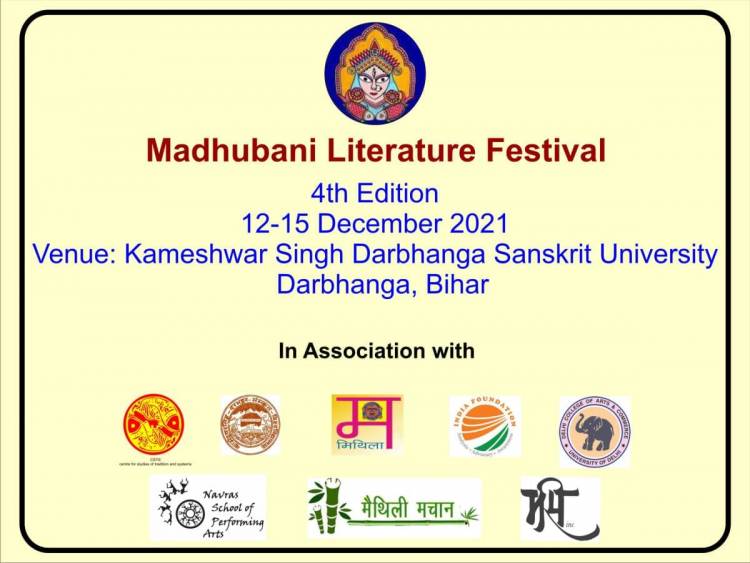 Madhubani Literature Festival (MLF) is a flagship program organised by Centre for Studies of Tradition and Systems (CSTS), Delhi. It has successfully convened three successive editions of literature festivals on the land of Mithila (Northern Bihar) in the year 2018, 2019 and 2020. In continuation to its previous endeavours, CSTS is going to inaugurate the fourth edition of Madhubani Literature Festival (MLF) with revised concepts of past events and some new added concerns with global vision. This year, it is scheduled to be conducted in Darbhanga, a profound historical and cultural seat to convey the core values of the body politic known as Mithila, from 12th December to 15th December at Kameshwar Singh Darbhanga Sanskrit University (KSDSU) campus.
Madhubani Literature Festival strives to aim at the inclusion of multiple areas representing socio-economic orientation, culture, and tradition of Mithila. In other words, this festival is a “celebration of locals” in all respects. Keeping the past endeavours in continuum, this year MLF is going to unfurl the rural sensibility lying under the sheets of socio-economic orientation of urban space. In addition, MLF-21 is going to provide platform for raising a discourse upon multiple dimensions of knowledge traditions, archiving the manuscripts, publication of scholarly works, rural upliftment, promotion of Maithili language and literature, women empowerment, heritage conservation, promotion of local art and craft, Indo-Nepal cultural bond and Environmental concerns.
Every year, MLF provides space for events which represent the cultural, spiritual, and philosophical tradition of Mithila. The special attention of MLF-21 will be on the celebration of “Sita”, the daughter of Mithila, in various forms through different medium of arts. An International Exhibition –“Vaidehi” -will display paintings of around one hundred and fifty avatars of Sita. Internationally acclaimed Bharatnatyam exponent Veena C Seshadri will be performing on “Jaya Jannki”, and the famous actress, Kanupriya Pandit will enact in the play named “Jayein Se Pahine: Siya Piya Katha”, written by Padma Shree Usha Kiran Khan and directed by renown actor and theatre director Padma Shree Ram Gopal Bajaj. Another major event is display of couturier work – “Ekvastra”, which is based on collective contribution of local weavers and women in local weaving industry. MLF-21 will be a huge opportunity for young generation, as it is going to provide space to “yuva sahitya” as well as young

Come and savor some of the world famous Cherries from the...

The Department of Journalism and Mass Communication of SRM Institute of Science...