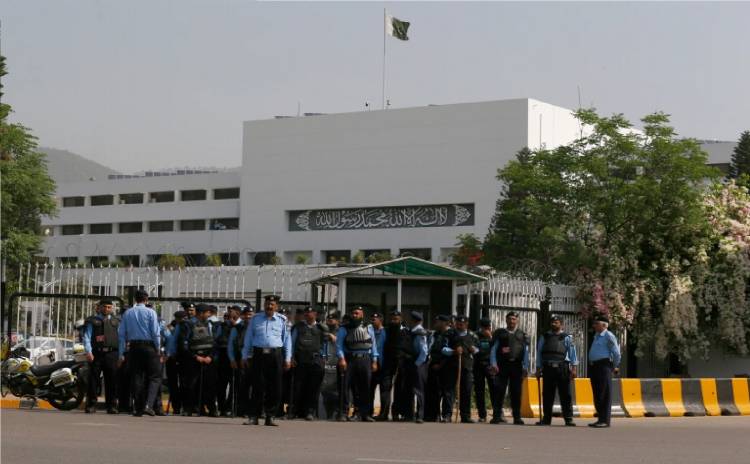 Members of Mr. Khan's party had suggested on Friday they would try to delay the vote as much as possible.
Pakistan's parliament abruptly adjourned before a planned vote on ousting Prime Minister Imran Khan, but the speaker said the assembly would reconvene later on Saturday as political uncertainty continued to grip the nuclear-armed country.

Members of Mr. Khan's party had suggested on Friday they would try to delay the vote as much as possible. The cricket star turned politician has vowed to "struggle" against any move to replace him, the latest twist in a crisis that has threatened political and economic stability in the South Asian nation of 220 million people.

Before the adjournment, opposition leader Shehbaz Sharif, expected to become Prime Minister if Mr. Khan is ousted, addressed the assembly, urging Qaiser to ensure the vote was carried out as a matter of priority.

The Speaker said he would implement the court order "in true letter and spirit".

Mr. Khan, 69, surged to power in 2018 with the military's support but recently lost his parliamentary majority when allies quit his coalition government. Opposition parties say he has failed to revive an economy battered by COVID-19 or fulfil promises to make Pakistan a corruption-free, prosperous nation respected on the world stage.

The opposition and some analysts say Mr. Khan has fallen out with the military, a charge he and the military deny. The army has ruled the state for half its 75-year post-colonial history, and no Prime Minister has completed their full five-year term.

It was not clear how long Mr. Khan's allies might seek to delay the vote. Lawyer Salahuddin Ahmed, who had argued in court for the vote to go ahead, said he believed it must occur before midnight.

Mr. Khan, who enjoyed widespread popular support when he took office, said late on Friday he was disappointed with the court ruling but accepted it. He had called an election after dissolving parliament.

But he said he would not recognise any opposition government that replaced him.

"I will not accept an imported government," he told the nation in a late-night address, suggesting the move to oust him was part of a foreign conspiracy and calling for peaceful protests on Sunday. "I'm ready for a struggle."

Khan opposed the U.S.-led intervention in Afghanistan and has developed relations with Russia since becoming prime minister. He has accused the United States of supporting a plot to oust him, without offering evidence of his claim, which Washington has dismissed.

If Mr. Khan loses the no-confidence vote, the opposition will put forward a candidate for Prime Minister.

Mr. Sharif, the younger brother of three-time former Prime Minister Nawaz Sharif, said after the court ruling that the opposition had nominated him to take over should Khan be ousted.

Classes commence at IIM Sambalpur in the online mode

After successfully completing the end term examinations of the first-year students...

Energy Efficiency Services Limited (EESL), a joint venture of PSUs of Ministry of...

Celebrate Your Love For Monsoon With See Love’s Skincare

As the scorching sun converts into a hidden