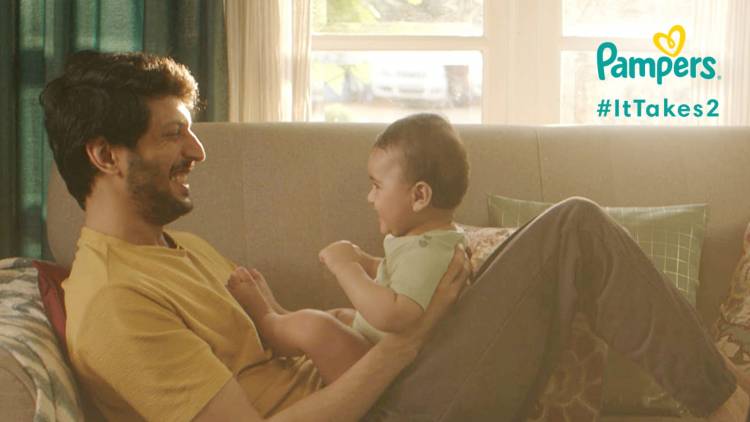 ~The film draws from statistic— around *92% dads regret not spending enough time with their baby:

Pampers®️ has been championing the powerful message of - #ItTakes2 to raise a baby for years and continues to focus the spotlight on the imbalance in our society and the benefits of equal parenting. Multiple studies show that equal parenting is an uplifting and rewarding experience for both the parents and the child. In its third edition of the campaign, through their latest heart-warming film, the brand is challenging cultural paradigms to encourage new dads to be more involved in childcare daily.

The film debunks the conventional belief that caring for a baby is only the responsibility of a mother and urges fathers to take charge and leave no room for regret when it comes to bringing up their children. The film's tagline #BaapBannaPadtaHai (One must ‘be’ a father), highlights the need for new fathers to participate equally in parenting from day one. The film drew inspiration from some very alarming statistics — 92% dads regret spending less time with their baby, found via a survey done by an independent body. Equal parenting not only strengthens the bond of the child with both mother and father, but it also helps the mother to relax and rest, which is vital after childbirth.

Conceptualized by Leo Burnett, it features two generations of fathers. A heartwarming conversation ensues between an ailing father and his middle-aged son in a hospital where the former regrets that he was not there for his son while his son was growing up. He wishes he could turn back time to be there for his son, be part of all his milestones. A nurse interrupts this emotional, tear-filled exchange to tell the son that he’s just become a father himself. As he holds his baby, the son makes a promise that he will always be there and be equal partner in bringing up his kid, remembering his ailing father’s words that #BaapBannaPadtaHai

As a part of the campaign, to truly enable new fathers to be equal parents, Pampers introduces ‘Baby Time’ – an initiative to help dads consciously spend more quality time with their babies and be more involved parents during their growing years. ‘Baby Time’ is a curation of content and a community where dads can avail parenting tips and tricks from experts and each other on different baby duties and how to truly be an equal parent. Currently there are 2 lakh+ active news dads who are part of this.

Talking about the campaign, Abhishek Desai, Vice President and Business Head – Baby Care at Procter & Gamble said “Our #ItTakes2 campaign is targeted at inspiring and urging new fathers to be a hands-on co-parent from day one, so they do not regret later on missing out their baby’s childhood moments and milestones. To be a father in the true sense, #BaapBannaPadtaHai. We salute Dads who have already kept true to their promise to their children and partners, but I believe we have a long way to go before equal co-parenting becomes the norm and not the exception.”

Rajdeepak Das, CEO & Chief Creative Officer, South Asia - Leo Burnett added, “Since the launch of its first edition in 2016, the #ItTakes2 campaign has questioned the unspoken perception of mothers being the primary nurturers, while fathers cater to their children only occasionally or when told to. Over the years our films have challenged this bias, urging fathers to willingly share equal parenting responsibilities and be involved in every aspect of raising a child. This year our film shows 2 fathers, one who regrets the time he couldn’t spend with his son, and the other who is determined to not repeat the same mistakes. It beautifully bridges the gap between two generations with a strong message.”

The last edition of the campaign launched in 2020 shows a man realizing his fatherly duties as he watches his wife undergo the pain of giving birth. He makes a silent promise to do whatever it takes to be an equal parent.

*Based on research conducted by Momspresso MomSights in May 2022 among 405 Dads with baby (0-5 yrs) across India.

Pampers® is the #1 selling diaper brand worldwide. For more than 50 years, Pampers® has been caring for the happy, healthy development of the world’s babies and in turn, has grown to become one of the biggest brands of P&G. Everyday Pampers® has been inspired by babies and has a range of variants catering to diverse consumer needs in India. These are Pampers® Premium Care, Pampers® All Round Protection, Pampers® Happy Skin Pants, Pampers® Active Baby Taped, Pampers® Baby Dry and Pampers® Preemies. Pampers® India has been using its advertising voice over the past years to help shape, build the category, and act as a ‘force for good’ on busting myths around parenting roles with a commitment to stand as a loyal ally parent. To know more, visit us at www.in.pampers.com or download the Pampers® App from Android & iOS play stores.

Apollo Hospitals Chennai is first in South India to use SENTINELTM Device designed...