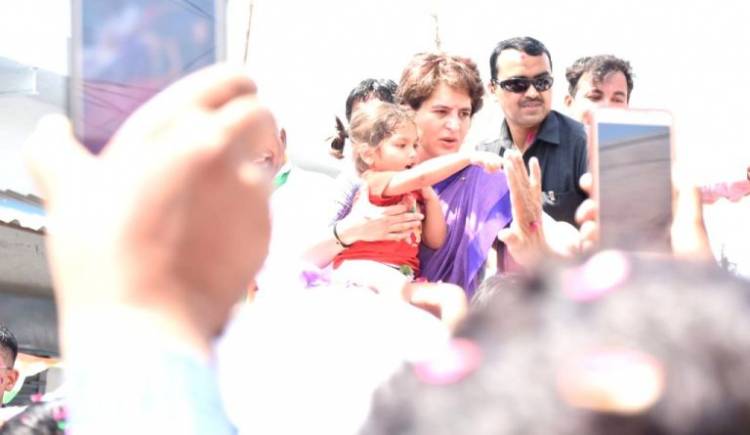 The Congress leader, who is also the party in-charge of eastern Uttar Pradesh, arrived in Jhansi around 11.20 a.m. and kicked off the road show from the party office in the Sindhi chauraha area of the town.

Her road show passed through areas like Manik Chowk, Bada Bazar, Subhash Ganj, Talaiya and Orcha gate before culminating in the Ewat Market area of the town, covering a distance of over 5 km.

She was accompanied by the party's candidate Shiv Sharan Kushwah.

Hundreds of party workers braved the heat to get a glimpse of their leader.

They raised slogans in support of the Congress leader and targeted the Bharatiya Janata Party (BJP) and Prime Minister Narendra Modi.

Clad in a purple sari, Priyanka Gandhi also offered a ride to some children on her SUV during the road show. Her gesture was cheered by several party workers who showered her with flower petals.

Later on Thursday, Priyanka Gandhi is scheduled to address a public meeting in Ghursarai area of the Jhansi parliamentary constituency.

On Wednesday, she had held a road show in Bundelkhand's Mahoba. Earlier, she also held road shows in different parts of the state for her party's candidates.

2000kg of rice to Guru Nanak college Kitchen where 1200 migrant workers from Orissa...

On behalf of my client Fortis Malar I am the sharing the...

On behalf of my client Fortis Malar .....