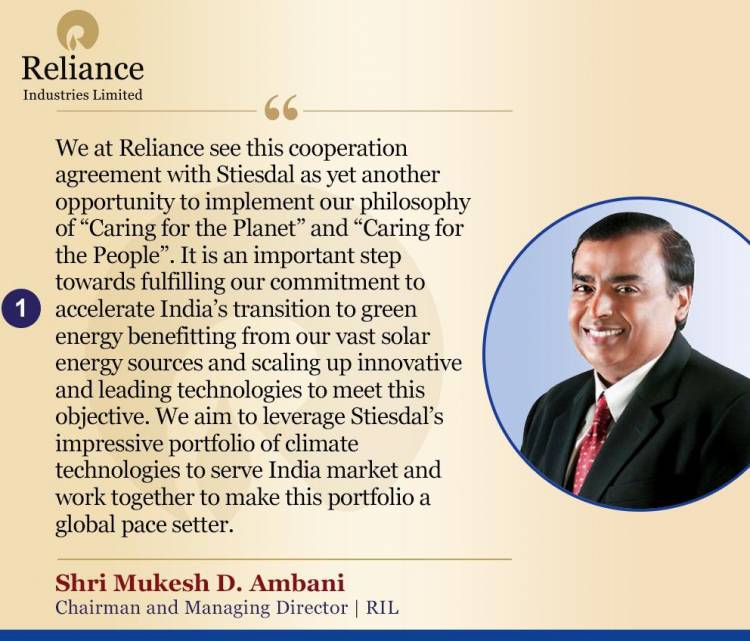 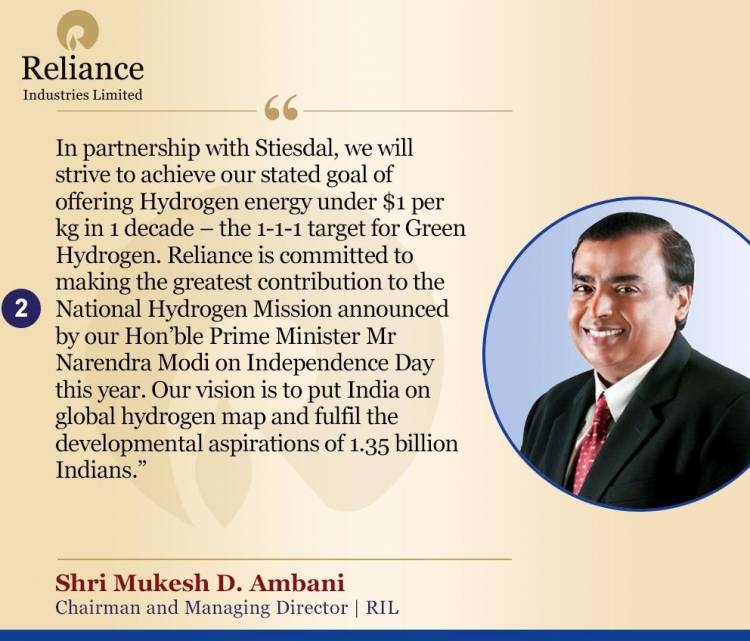 Mumbai, October 12, 2021: Reliance New Energy Solar Limited (RNESL), a wholly owned subsidiary of Reliance Industries Limited (RIL), and Denmark-based Stiesdal A/S (Stiesdal) signed a cooperation agreement for technology development, and manufacturing of Stiesdal’s HydroGen Electrolyzers in India. The agreement was signed during a state visit of Denmark to India and announced in the presence of the Hon’ble Mr. Narendra Modi, Prime Minister of India and the Hon’ble Ms. Mette Frederiksen, Prime Minister of Denmark.

Mr. Mukesh Ambani, Chairman of Reliance Industries, had announced ambitious plans of setting up a giga factory for manufacturing of hydrogen electrolyzers in Jamnagar, Gujarat. Through this agreement, RNESL and Stiesdal will combine their strengths and capabilities and collaborate to further advance the technology development of HydroGen Electrolyzers and scale it up to set up manufacturing facilities.

As part of this agreement RNESL and Stiesdal have also agreed to extend their collaboration to development and implementation of other path breaking climate change technologies which include offshore wind energy, next generation fuel cells for conversion of hydrogen to electricity for mobile and static electricity generation, long duration energy storage and production of carbon negative fuels.

Speaking after signing of the agreement, Mr. Mukesh Ambani said, “We at Reliance see this cooperation agreement with Stiesdal as yet another opportunity to implement our philosophy of “Caring for the Planet” and “Caring for the People”. It is an important step towards fulfilling our commitment to accelerate India’s transition to green energy benefitting from our vast solar energy sources and scaling up innovative and leading technologies to meet this objective. We aim to leverage Stiesdal’s impressive portfolio of climate technologies to serve India market and work together to make this portfolio a global pace setter. In partnership with Stiesdal, we will strive to achieve our stated goal of offering Hydrogen energy under $1 per kg in 1 decade – the 1-1-1 target for Green Hydrogen. Reliance is committed to making the greatest contribution to the National Hydrogen Mission announced by our Hon’ble Prime Minister Mr Narendra Modi on Independence Day this year. Our vision is to put India on global hydrogen map and fulfil the developmental aspirations of 1.35 billion Indians.”

Mr. Hital Meswani, Executive Director of Reliance Industries, said, “Reliance is committed to realising its stated ambitions in new energy and accelerating the technology development and scale up of world leading technologies. We welcome Stiesdal as our partner and look forward to working together to achieve our goals.”

Mr. Henrik Stiesdal, CEO of Stiesdal A/S, said, “We are excited to enter into this agreement with Reliance New Energy Solar Limited, the New Energy platform of India’s largest industrial company. As a company, we are committed to the fight against climate change, seeking to deliver the largest possible impact in the shortest possible time. For us there could be no greater impact than seeing our technology scaled up for use in the world’s largest democracy. Production of low-cost hydrogen is a vital strategic element of the green transition in India and the world, and Reliance Industries have the reach and capability to ramp up electrolyzer production to the required levels.

We are very much looking forward to developing and expanding our cooperation with Reliance New Energy Solar Limited, not only within the field of hydrogen production, but also within the fields of our other climate technologies.”

The HydroGen Electrolyzer technology is developed by Stiesdal PtX Technologies. It is an effective technology for green hydrogen production at a game-changing cost level. The HydroGen Electrolyzer benefits from a combination of innovative solutions and a thoroughly industrialized approach to product design and achieving maximum economies of scale in both the output from the electrolyzer unit as well as mass production of the electrolyzer itself. Combined with Reliance’s deep expertise in innovation, project execution and operational excellence and its world-class talent pool, this partnership will bring affordable green hydrogen to millions of Indians.

About Stiesdal
Stiesdal A/S is headquartered in Odense and has locations in Give and Copenhagen. The company operates four subsidiaries, each with a focus on their own green technology:

Stiesdal Offshore Technologies has developed the modular floating offshore wind turbine foundation Tetra, which can be produced faster and cheaper than other solutions on the market. A demo project has been installed off the coast of Norway in 2021 with funding from Shell, RWE and TEPCO.

Stiesdal Storage Technologies has developed the energy storage solution GridScale, which can store electricity in the form of heat in crushed stone. The solution offers longer storage time than lithium-ion batteries, and an agreement has been entered into with the Danish energy group Andel to install the first demo project in Rødby, Denmark, in 2022.

Stiesdal PtX Technologies has developed the hydrogen technology HydroGen, which is a new type of electrolysis system that can convert electricity to hydrogen cheaper than other electrolysis technologies on the market. The first demo project will be installed early 2022.

Stiesdal Fuel Technologies has developed the SkyClean technology, which can produce CO2-negative fuel for aircraft. This is done through pyrolysis where biomass is converted into biofuel for air transport while CO2 is captured and stored from the atmosphere.

Society of Indian Automobile Manufacturers (SIAM) in association with Automotive...