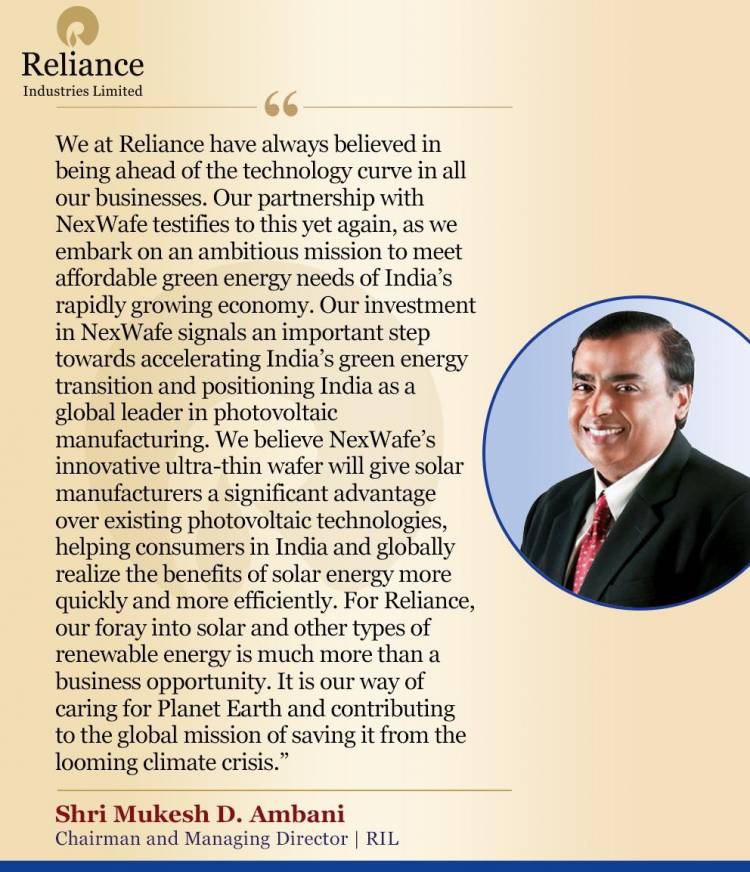 FREIBURG, GERMANY, October 12, 2021 – NexWafe GmbH (NexWafe) today announced the induction of Reliance New Energy Solar Limited (RNESL), a wholly owned subsidiary of Reliance Industries Limited (Reliance) as a strategic lead investor in its EUR 39 million ($45 million) Series C financing round with an investment of EUR 25 million ($29 million) in phase one.
The investment by Reliance will accelerate product and technology development for NexWafe, including completion of the commercial development of NexWafe’s solar photovoltaic products on prototype lines in Freiburg.
Reliance and NexWafe have also entered into an India Strategic Partnership Agreement providing for joint technology development and commercialization, at scale, of high- efficiency monocrystalline “green solar wafers.”
Reliance, through this partnership, will secure access to NexWafe’s proprietary technology and plans to build large-scale wafer manufacturing facilities in India using the NexWafe processes and technology.
NexWafe is developing and producing monocrystalline silicon wafers grown directly from inexpensive raw materials, going directly from the gas phase to finished wafers. This proprietary process obviates the need for costly and energy intensive intermediate steps such as polysilicon production and ingot pulling on which traditional wafer manufacturing relies. NexWafe uses in-line manufacturing, both for the formation of an initial release layer as well as for epitaxial deposition of silicon in an atmospheric chemical vapor deposition process. NexWafe’s unique patented technology is expected to drastically cut wafer production costs, making solar photovoltaics the lowest-cost form of renewable energy available.

Reliance`s investment in NexWafe further underscores its goal of making India the world’s leading green energy provider by leapfrogging existing technology, thus creating the world’s most cost- and energy-efficient photovoltaic process at scale.
Mr. Mukesh Ambani, Chairman of Reliance Industries Limited, said, “We at Reliance have always believed in being ahead of the technology curve in all our businesses. Our partnership with NexWafe testifies to this yet again, as we embark on an ambitious mission to meet affordable green energy needs of India’s rapidly growing economy. Our investment in NexWafe signals an important step towards accelerating India’s green energy transition and positioning India as a global leader in photovoltaic manufacturing. We believe NexWafe’s innovative ultra-thin wafer will give solar manufacturers a significant advantage over existing photovoltaic technologies, helping consumers in India and globally realize the benefits of solar energy more quickly and more efficiently.
For Reliance, our foray into solar and other types of renewable energy is much more than a business opportunity. It is our way of caring for Planet Earth and contributing to the global mission of saving it from the looming climate crisis.”
Davor Sutija, CEO of NexWafe, said, “With its strategic partnership with NexWafe, Reliance can bring the latest in solar wafer innovation to India while also leveling the global playing field for photovoltaic manufacturers, expanding manufacturing beyond a single source market.”
NexWafe Chairman Bart Markus added: “Reliance is famed for its ability to create quality products at the most competitive prices, so its commitment to helping us reshape and reinvent the silicon wafer will be, we believe, game-changing for helping the world deploy high-efficiency photovoltaics at scale.”
Other investors joining Reliance in the Series C Round include InnoEnergy, Lynwood, Saudi Aramco Energy Ventures and other incumbent and new investors, adding another nearly EUR 10 million ($12 million) to the round. Additionally, InnoEnergy, will also convert its current debt of EUR 4 million ($4.7 million) in NexWafe into equity at the same share price as the Series C Round shares.

ACXIT Capital Partners are acting as the exclusive financial advisor to NexWafe. International law firms GÖRG and Raeder are acting as legal counsel to the company.

Linklaters acted as the legal advisor and Deloitte as the accounting and tax advisor to Reliance on this transaction.

Reliance is the top-ranked company from India to feature in Fortune’s Global 500 list of “World’s Largest Companies.” The company stands 55th in the Forbes Global 2000 rankings of “World’s Largest Public Companies” for 2021 – top-most among Indian companies. It features among LinkedIn’s “The Best Companies to Work For In India” (2021). For more information visit: www.ril.com.

A memorable and historical victorious Tokyo ........

Bajaj Auto, one of the World’s leading automobile companies, has launched the 2019...

WELCOME THE ONSET OF THE MONSOON AND EXPLORE THE HIDDEN...

This Monsoon season, discover another side of Goa with a dramatic shift in landscape....

The Singapore Tourism Board collaborates with Star Vijay

The Singapore Tourism Board collaborates with Star Vijay...........

Renault TRIBER has won customers owing to its outstanding quality and superior value...