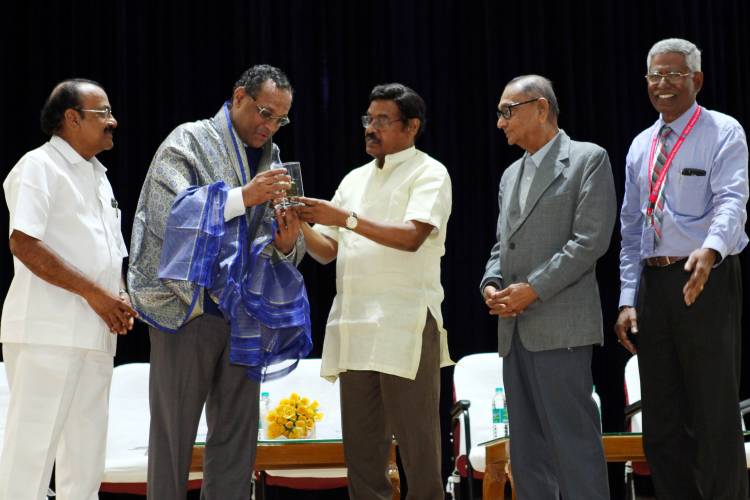 “It is important for students to be aware of what Article 370 is about rather than making it a debate in colleges and schools,” said Senior Advocate- Supreme Court, N Venkataraman. He spoke to a large gather of students from School of Law, School of Management, Social Sciences, Journalism and Mass Communication on Abrogation of Article 370 and its impact at the third edition of Dr. Paarivendhar Management Lecture series organized by the School of Management (SOM) at SRM Institute of Science and Technology, Kattankulathur.

The event was presided over by Founder Chancellor of SRMIST and Member of Parliament Dr. T R Paarivendhar. Addressing students Dr. Paarivendhar said, “You should be responsible and be up-to-date on current events. You should also be aware of what is happening in the country and around the world. You should also have knowledge and information on special subjects such as Article 370.”

He added that Abrogation of Article 370 was discussed at length in the Parliament. “I was present for the discussion,” he added. “This series is more than a normal meeting as we bring eminent people to discuss and create awareness on important issues. Such lectures will continue henceforth.’
In his talk, Venkataraman explained why J&K came under Article 370, its benefits and drawback. He gave a detailed explanation of how the Princely State of J&K was annexed to India in 1947. He also elaborated on how the present government took steps to abrogate it on 5 August 2019.

He encouraged students to think logically before coming to a conclusion on why Article 370 was abrogated. “Ask yourself why Kashmir was given special status and why it was removed now. You must also know why the status was revoked by the President of India and not by anyone else.” He then lined out all the explanations with supportive Schedules, Acts, and Articles to students.
He urged students to look at the abrogation through five points – namely self-determination, autonomy, plebiscite, Pakistan occupied Kashmir and international acceptance. After explaining these points in detail, he drew a conclusion on why our Government had no other choice but to take the fifth option as their route.

“Eighty percent of the countries in the world have accepted this decision claiming it to be an internal matter. A few countries like Turkey, Malaysia, and Pakistan were opposed to this idea. However, UAE and a few Arabian countries have conferred their highest civilian award to the PM of India for having successfully abrogating Article 370.”

Answering questions from students, he said, “Many complain that this abrogation should not have been done. But if the people did not want it, they could have voted out the present political party as they had already mentioned this in their manifesto. Now the Government has abrogated Article 370 and make J&K Union Territory. Once the situation completes a stability period they will make it a State.”

He advised students to contribute towards the society to make it more powerful. “Our country can be safe only if the children are safe. There should be no space for discrimination in terms of caste, religion, or creed. Don’t get dejected if you face failure or rejection, these are just part and parcels of life. You, youngsters, should be One Nation, One India.”

Bajaj Auto | Launch of a Lifetime

Nilam hailing from a slum in Bhandup receives the Prince’s Trust Global Award 2019...