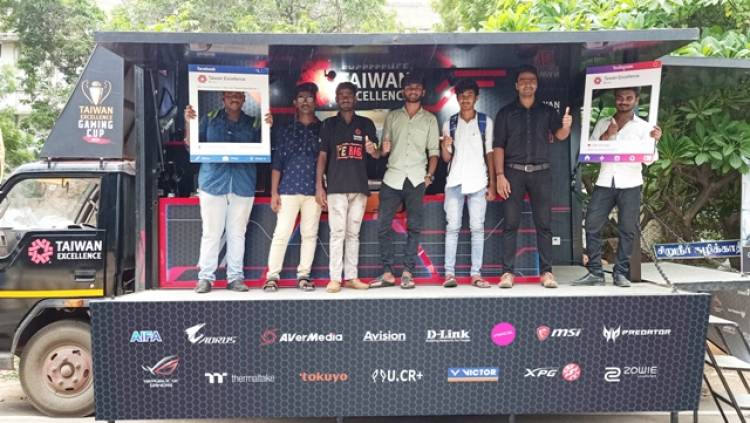 Chennai: An advanced hi-tech gaming vehicle landed in the city of Chennai on  to give locals an experience of a lifetime to witness super cool technology. Taiwan Excellence’s Rig reached the city as a part of its multi-city tour where it showcases landmark products covering gaming, ICT, home & living – each bearing the hallmark of Taiwan Excellence that stands for brilliance in technology.

TE Rig – an automobile laden with the finest products in the world, zoomed across the city and halted at Chromepet & Govt. Arts College,Nandnam, letting people catch a glimpse and get first-hand experience of the superb tech. The excitement surrounding the rig was incredible and mind-blowing. People crowded around the vehicle to catch a glimpse of the cutting-edge products and technology.Taiwan is the ultimate destination for world-class technology and the Rig is testimony of the superlative innovations it offers. The quirky vehicle that comes from this iconic institution has already been generating a lot of buzz and exhilaration.

Thiswas the  stop in the Rig’s travel for 90 days where it will cover 61 cities in 12 states. In each city, it will give people a chance to get a hands on experience of the world-class technology.Leading brands like Acer, ADATA, AIFA, ASUS, AVerMedia, Avision, D-Link, Gigabyte, FECA, MSI, Thermaltake, Tokuyo, U.Cr+ and Zowie will be showcasing their products on the Rig – giving tech enthusiasts the chance to lay their hands on superb technology.

The Rig was flagged off from Delhi on June 27 and this is its third edition. The first two years saw an overwhelming response which prompted Taiwan Excellence to introduce a much bigger version of the Rig this year. While Taiwan Excellence has already reached out to the big cities and Metros in India, with initiatives like TE RIG it is now also reaching out to people in tier II and tier III cities as well.

Speaking about TE Rig’s tour,Herben Wu, Director of Taipei World Trade Center Liaison office New Delhi, said, “TE Rig began its exciting journey some days back. In every city that it goes to, it will bring a lot of joy to people from all age groups by giving them the chance to witness ground-breaking technology. We are looking forward to some great response from every nook and corner of India.”

TE Rig comes ahead of TEGC, which is India’s longest running e- sports championship. The elimination rounds of TEGC began on 28th June for the pan India championship that has an impressive line-up of cities including Hyderabad, Bengaluru, Silchar, Kolkata, Pune and Mumbai, followed by the online Qualifiers of CS:GO, DOTA 2 and PUBG. The grand finale will take place in Mumbai on 27th and 28th September which will see a total of 8 CS:GO teams and 8 DOTA 2 teams battle it out for being the ultimate champion. This year, TEGC will challenge gamers to battle it out for the most coveted cup and winners will take home a cumulative cash prize of Rs 10 lakh and many other brand prizes.

Also, this year TEGC will provide the winning team of CS:GO with a free trip to Taiwan, where they will represent India at International level in the Taiwan Excellence e-sports championship to play a friendly match from Taiwan,Malysia, Phillipenes and Thailand.

The wait is finally over!! @_PVRCinemas is NOW OPEN and...