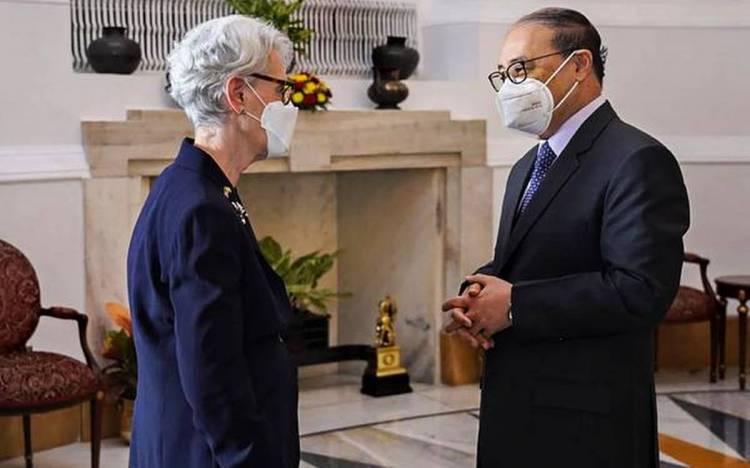 India and the U.S. are on the same page on Afghanistan and the threat to the region from terrorism, said visiting American Deputy Secretary of State Wendy Sherman, calling the partnership “indispensable” for both countries and the world.

Striking a discordant note on India’s impending delivery of the Russian S-400 missile systems, however, Ms. Sherman, who described the S-400 deal as “dangerous”, expressed the hope that the two sides could “solve” the issue that arises from the possibility of U.S. sanctions over the defence purchase.

“We’ve been quite public about any country that decides to use the S-400. We think that it is dangerous and not in anybody’s security interest,” Ms. Sherman said in response to a question from The Hindu at a roundtable with journalists on Wednesday.

“That said, we have a strong partnership with India; we want to be very thoughtful about the ways ahead and discussions between our countries try to solve problems,” she added, hoping that the talks in the weeks ahead would resolve this issue as well.

According to sources, Ms. Sherman, who met with NSA Ajit Doval and External Affairs Minister S. Jaishankar on Wednesday, also “raised” the S-400 purchase during her talks over lunch with Foreign Secretary Harsh Shringla.

Her comments followed a day after Indian Airforce (IAF) Chief Air Chief Marshal (ACM) V.R. Chaudhari confirmed that the $5.43 billion S-400 system deal signed in 2018 with Russia is “on track” and the “first regiment” is expected to be inducted “within this year”, or by end-December 2021.

The delivery is expected to trigger sanctions under the U.S.’s CAATSA law, which Washington has already imposed on Turkey and China for buying the S-400, unless the U.S. President steps in with a waiver. Government sources said the issue will continue to be discussed by the two sides.

Over the next few weeks, the two sides are expected to meet for a number of bilateral functions, including the Defence Policy Dialogue headed by Defence Secretaries in Washington this weekend, the Joint Working Group (JWG) on Counter Terrorism on October 26th, leading up to the “2+2” meeting of Defence and Foreign Ministers together in November.

A delegation from the office of the U.S. Trade Representative is in Delhi for trade talks this week, and Finance Minister Nirmala Sitharaman is expected to travel to Washington “soon”, said government sources, possibly next week, to attend the International Monetary Fund (IMF) annual meeting, and for the Economic and Financial Partnership meeting with her counterpart U.S. Treasury Secretary Janet Yellen.

Describing the partnership during a public address to the U.S. India Business Council (USIBC)’s India Ideas Summit shortly after the meeting, Mr. Shringla indicated that the future of the Indo-Pacific region, and the situation in Afghanistan were at the top of their discussions.

“Given the fast-paced developments in South Asia, especially in Afghanistan, India and the U.S. will remain closely engaged both on the future of Afghanistan, and on how we can maintain peace and stability in South Asia, and beyond,” Mr. Shringla said.

When asked if the U.S. is discussing the possibility of cooperating on sourcing military bases with India, or with countries like Uzbekistan and Pakistan, which are part of Ms. Sherman’s current tour, she said the U.S. is discussing its options for airstrikes on Afghanistan through “over the horizon” (OTH) efforts, but did not elaborate further on India’s response.

“All of our departments and agencies have put together a very robust programme of what we call “over the horizon efforts” of partnership on counterterrorism with India as part of that strong process to make sure that India’s security is first and foremost, in our minds, we will always have Indian security front and centre in our considerations of how the United States proceeds,” Ms. Sherman said.

Ms. Sherman and Mr. Shringla also spoke “at length” about the Quad vaccine partnership which will entail manufacturing one billion J&J American vaccines in India by end 2022, said sources, but denied that the issue of indemnity clauses, which India insists on, will be a roadblock to the Quad proposals. Ms. Sherman said she had “applauded” India’s decision to resume its vaccine exports that were cancelled during the pandemic’s second wave in April, and both sides discussed future cooperation on vaccines.

M. Sherman will travel to Mumbai on Thursday for meetings with business persons, and will head to Pakistan after that.

COVID 19 will eventually be gone but cardiac diseases are here to stay. Cardiovascular...

The Christmas Tree Lighting is a ritual that officially