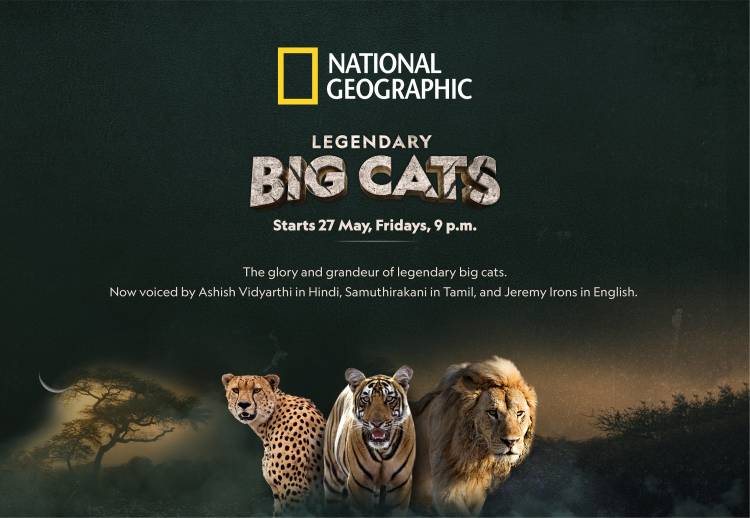 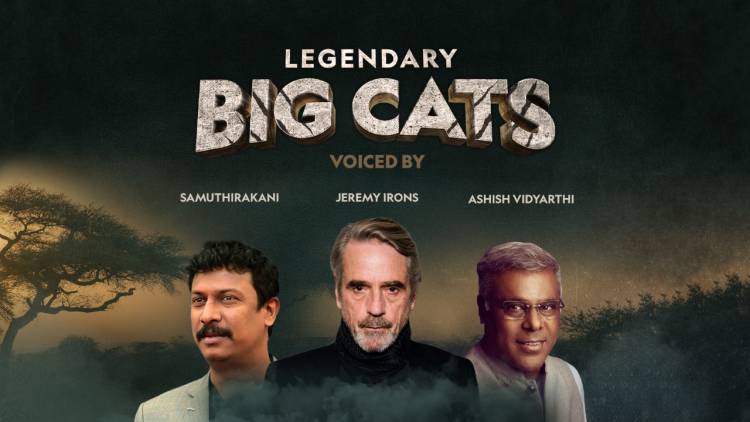 Starting 27th May, 2022, the Tamil version of the series – Legendary Big Cats will be brought alive through the riveting voice of Indian actor and director – Samuthirakani, on Nat Geo Wild

Chennai, May 27, 2022: Nat Geo Wild, with its rich legacy of powerful, innovative and insightful storytelling, is all set to bring the audience closer to the world of magnificent cats of the wild. Through the riveting voice of actor and director - Samuthirakani, the channel is bringing a new adventurous series - ‘LEGENDARY BIG CATS’ in Tamil. Premiering on 27th May, 2022, the series will premiere 5 powerful stories, exploring the lives of different big cat species captured in their natural habitats.

This latest series chronicles the epic stories of alluring tigers, leopards, lions and even black panthers that dominate varied landscapes. The episodes will take the viewers through the stories of Immani – a female Cheetah from Kenya who protects her cubs against predators, Legadema – an eight-day-old cub from Botswana who turned into a skilled huntress from a playful cub and lots more. Packaged together with stunning visuals and breath-taking cinematography, Tamil actor and director Samuthirakani is stepping in to take the viewers through the fascinating world of all the mighty creatures

“As an artist, it has been my constant endeavor to look out for unique, engaging opportunities to connect with my fans and I have always wanted to work with a brand like National Geographic. I been deeply fascinated by all the big cats – lions, cheetahs, tigers and of course leopards. With ‘Legendary Big Cats’, I got an opportunity to bring a little bit of my own personality and add my own flavor to an all new series on a popular brand like Nat Geo Wild. This has been one of my most gratifying experiences and I really believe  that the Tamil speaking audiences will appreciate every story in the series as much as I did." said Samuthirakani, Indian Actor & Director

Episodes to be aired under the series: (Synopsis mentioned below)

The Way of the Cheetah – The episode revolves around the story of Immani, a sleek female with 4 cubs as they navigate the plains of the Mara ecosystem - and living here is also a coalition of 5 males; to save her cubs, Immani must avoid them. A film by Dereck and Beverly Joubert who have made dozens of big cat films, but never one on cheetahs.

India’s Big Cats – From the dramatic snow-capped Himalayas, down to arid lowlands, India has earned its title: Big Cat Capital of the World. Snow leopards thrive in the thin mountain air and the nearly extinct Bengal tiger roams the country’s fertile forests. Here, the planet’s only population of Asiatic lions thrive, and the elusive black panther lives to see another day.

Ultimate Enemies – National Geographic filmmakers, Dereck and Beverly Joubert, explore how some animals are thrust together by the forces of nature—sometimes through a millennium of evolution or even last year’s drought. In the aftermath of strange elephant deaths, they piece together a visually stunning story that confirms their theory that lions were hunting elephants. Narrated by Jeremy Irons.

Eye of the Leopard – National Geographic filmmakers Dereck and Beverly Joubert set out to create a film on leopards but never imagined they would be seduced by a small, eight-day-old cub named Legadema. Eye of the Leopard follows Legadema’s journey from a playful cub to a skilled huntress. Narrated by Jeremy Irons.

Eternal Enemies – The Joubert’s Emmy winning film is back with stunning remastered footage. Propelled by Jeremy Irons gripping narration, Eternal Enemies reveals the story of conflict between lions and hyenas, relatively unknown or even suspected in the scientific world before this. The intense relationship and enduring rivalry between the two species play out in a battle of survival. Narrated by Jeremy Irons.

Nat Geo Wild primarily focuses on wildlife and is dedicated to providing a unique insight into the natural world, the environment and the amazing creatures that inhabit it. From the most remote environments, to the forbidding depths of our oceans, to the protected parks on our doorsteps, Nat Geo Wild uses spectacular cinematography and compelling storytelling to take viewers on unforgettable journeys into the wild world.

An intriguing book on the forgotten history of Insulin authored by legendary Diabetologist...