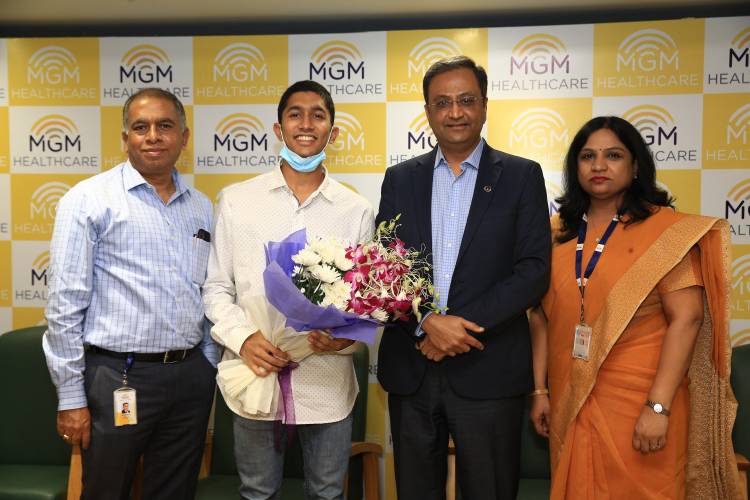 Youngster gets relief from 'ringing sensation’ by rare surgery at MGM Healthcare, Chennai

Chennai, 8th April 2021: MGM Healthcare, a super-specialty hospital in the heart of Chennai city, today announced that it has successfully conducted a highly specialised surgery called Microvascular Decompression (MVD) surgery to treat a 26-year-old male who reported a rare form of tinnitus. This is the first time the condition is being treated through MVD surgery in the country.

Tinnitus is a health condition in which the patient feels a ringing noise in the ears continuously, even though there is no external noise. Many a times, this could be a symptom of an undiagnosed ailment. MVD is a procedure that is regularly performed to treat Trigeminal Neuralgia (shock like pain over the face due to compression of nerves) but is used in treating tinnitus for the first time now.

The patient had been suffering from tinnitus in his left ear since April 2019 and tried indigenous medication, but to no avail. The internal noise not only affected his sleep but also resulted in losing focus on his daily activities and thus, it impacted the patient’s normal way of life. The disease is very rare that the medical world has recorded less than 50 cases worldwide, with none from India till date.

He consulted several ENT surgeons who could only conclude that his hearing was normal. There were no abnormalities diagnosed in his ear during numerous detailed examinations. But later, he was directed to the Institute of Neurosciences & Spinal Disorders at MGM Healthcare. On primary examination, followed by an MRI of the brain done in January 2020, there showed to be no abnormal tumour or vascular malformation that could explain the tinnitus. However, a more detailed examination revealed the possible cause of the tinnitus.

“After a detailed examination, it was diagnosed that the artery abutting the auditory nerve was creating this problem,” stated Dr K Sridhar, Director and Group Head, Institute of Neurosciences & Spinal Disorders, MGM Healthcare. He added, “The surgery – Microvascular Decompression of the Cochlear Nerve – entailed a highly precise and delicate microsurgical procedure under high magnification to move the artery away from the nerve and ensure that it stays that way, thus eradicating the problem. The main issue while performing this surgery for tinnitus is that if it is not performed with utmost precision, the patient can turn deaf and also develop facial weakness. We, at MGM Healthcare, are delighted to help this young person get back on his feet and go on with his higher education as he had planned earlier.”

Speaking about the experience, the patient said, “Two years is a long time to have a ringing sound in the ears. It really took a lot away from my life and work. I am grateful to Dr Sridhar and his team and MGM Healthcare for helping me find relief to my problem. The experience has been great. I am truly happy to finally have a permanent solution to this problem.” Post-surgery, the patient reported relief from the ringing sound in his ear. He is now able to sleep comfortably and concentrate on work. He is planning to pursue his higher studies which was kept on hold because of the tinnitus.

Nisha Bengani Gandhi has been recognized among the 100 SMARTEST DIGITAL MARKETING...