Airtel rolls out Thalaivar’s ‘Darbar’ experience for its customers 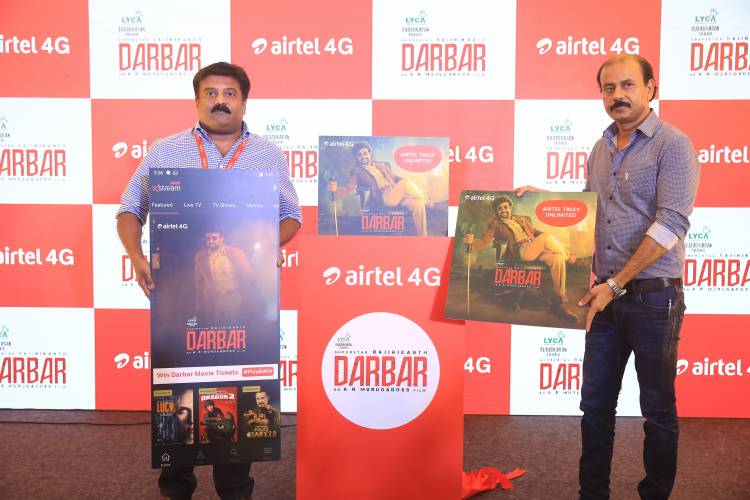 Bharti Airtel (“Airtel”), India’s leading integrated telecommunications services provider, today announced an exclusive partnership with the upcoming Rajinikanth starrer ‘Darbar’. As part of the association, Airtel has rolled out an array of exciting offers that promise an unlimited experience of ‘Darbar’ to its customers.
Airtel customers can participate in a highly interactive ‘Darbar quiz’ on Airtel Xstream app and stand a chance to win exciting prizes including Darbar movie tickets and the opportunity to meet the movie cast and crew.

Airtel has also launched Limited Edition Darbar branded SIM pouch and prepaid packs that will offer unlimited calling and roaming benefits along with high-speed data.
Manoj Murali, CEO-Bharti Airtel, Tamil Nadu & Kerala said, “We are delighted to be associated with Darbar. We had received an overwhelming response from the customers during our past tie-ups with Kabali and Kaala. As part of our endeavour to offer a great network and content experience to our customers, we are excited to bring an exclusive Darbar experience to our customers. We invite Rajini fans to enjoy this special experience and celebrate yet another thriller from the superstar.”
To take part in the ‘Darbar’ quiz
1.      Airtel customers need to be on the latest version of the Airtel Xstream app (available for both Android and iOS). New users can download the app, while existing users will receive automatic update notifications.
2.      Non-Airtel users need to get an Airtel 4G SIM, insert it in SIM Slot 1 of their smartphone and follow step 1 to get started.
Airtel Xstream app is a revamped version of Airtel TV app. The refreshed app has a new User Interface and much sharper content discovery and recommendation engine. Airtel customers can also access Airtel Xstream content on the web by logging onto www.airtelxstream.in which offers a convenient way to watch LIVE TV, movies and shows.

About Airtel India
Bharti Airtel Limited is a leading global telecommunications company with operations in 18 countries across Asia and Africa. Headquartered in New Delhi, India, the company ranks amongst the top 3 mobile service providers globally in terms of subscribers. In India, the company's product offerings include 2G, 3G and 4G wireless services, mobile commerce, fixed line services, high speed home broadband, DTH, enterprise services including national & international long distance services to carriers. In the rest of the geographies, it offers 2G, 3G, 4G wireless services and mobile commerce. Bharti Airtel had over 411 million customers across its operations at the end of September 2019. To know more please visit, www.airtel.com

Shane Watson was bleeding and got 6 stitches after IPL...

Shane Watson, who scored a valiant 80 for the Chennai Super Kings in the finals...

The clinic would have all-inclusive evaluation and treatment facilities to address...

Bajaj Pulsar celebrates 18 years of success with a mega...

Bajaj Auto celebrates the 18th anniversary of its iconic brand Pulsar with thousands...