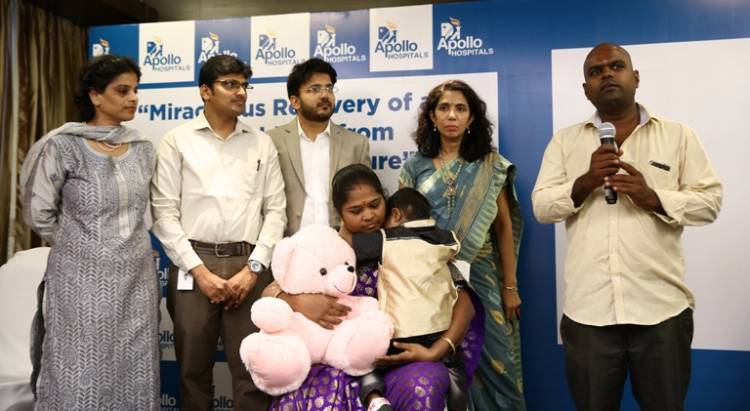 While Liver transplant remains as the epitome of the many momentous ways that can guarantee survival in a patient with liver failure, Specialist at Apollo Children’s Hospitals, Chennai saved a three-year-old boy, Radhesh from Fulminant Liver Failure without a liver transplant.

Children with sudden catastrophic liver failure (also called fulminant liver failure) do not have enough time to wait for a favorable donor. In most of the cases, they suffer from malignant brain swelling, torrential bleeding, or galloping infections. If a liver transplant is not performed within the stipulated time gap of a day or two patients might lose their life waiting for a suitable liver for transplantation.

Recently, Three-year-old Radhesh developed a sudden fever, which almost took his life. Hailing from a middle class background his parents were distressed by their son’s deteriorating health. When he was brought to Apollo Children’s Hospital Emergency Room for treatment,Dr Priyavarthini, Senior Consultant in the PICU , diagnosed him with Fulminant Liver Failure.

Dr Suchitra Ranjit, Senior Consultant, Chief of Pediatric ICU, Dr Vasanth Kumar, Dr Priyavarthini and Dr Rajeswari N and team of doctors at Apollo Children’s Hospital were worried for his life and sought the advice of the liver-transport team and he was listed for emergency liver transplant. Meanwhile,the team decided to try out all possible ways to bring back the child’s condition to normalcy. The child was under the complex ICU Liver-Support Therapy that serves mainly as a bridge to support life until a liver transplant is completed. The ICU Liver Support Therapy supports the entire body-system and perform the functions of the liver until the liver is totally recovered.

Speaking about the case Dr Suchitra Ranjit, Senior Consultant, Chief of Pediatric ICU, Apollo Children’s Hospital, said, “Within 24hrs, he worsened further and his life was in a delicate balance. Liver failure has detrimental effects on many important organs, including the brain, kidney, circulation, and blood clotting: he quickly became deeply comatose with a dangerously swollen brain on CT scan, his urine output stopped, and his blood clotting mechanisms failed with very high risk of hemorrhage. We were worried that he would lose his life waiting for a suitable liver, and he was listed for a super-urgent cadaveric liver transplant so that the first available O+ liver in the whole of Tamil Nadu would be rushed for Radhesh.The patient’s story went viral on a Crowd-funding site and sufficient money was gathered for the procedure, while the patient was still awaiting the organ.”

She also added, “Our aim was to sustain Radhesh until a liver was made available. We placed him on complete life-support utilizing the same high-end technology that is available in the best liver-units across the world. He was ventilated, placed on chemically-induced coma, and provided Continuous Renal Replacement Therapy (CRRT – a technologically advanced form of dialysis) and also a dose of daily plasma-exchange (a form of blood purification therapy), in addition to continuous brain monitoring and circulatory support. These therapies are temporary, highly risky, and invasive and meant as a bridge to transplant. No donor was suitable- and miraculously Radhesh pulled off the most unlikely and marvelous feat and started functioning normally.”

Radhesh’s liver which was totally necrotic (destroyed) started showing recovery. As his liver recovered his brain swelling decreased, and kidney function improved. All the tests started to improve, andon 20April2019 (nine days after admission), he was removed from ventilator and other life-support systems were discontinued.

10 days after discharge, Radhesh is playing cricket with his brother and sister and looking forward to joining school. This was an ordinary family of the street with no-one to speak for them, and we at Apollo Childrens Hospital could offer the child and his family the full might of Apollo’s formidable technology and support. Apollo’s motto is to touch lives, and this little life was truly touched with fantastic help from powers above.

Shout out to all the kids who love to spend their summers drenched in art and lots...

Started almost 27 years back as inter-orphan sports meet, and then converted into...

For over a quarter of Century, ITC has traversed ....