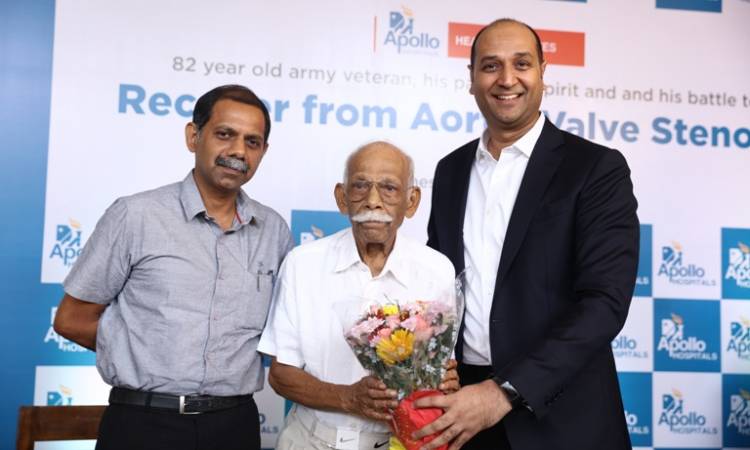 Aortic valve stenosis is a common valvular disease that occurs usually in old age due to wear and tear of aortic valve as well as calcium deposits on the valve’s flaps that narrow the aortic valve opening.  Symptoms include shortness of breath and chest pain that, if left untreated, can be life threatening. Trans Catheter Aortic Valve Implantation or Replacement (TAVI or TAVR)  procedure performed under local anesthesia is a best option to treat such complicated cases. In this procedure a thin, flexible tube housing the new collapsed valve is inserted most commonly through the femoral artery and delivered to the heart, replacing the old diseased valve. This procedure is available only in very few centres across in India including Apollo Hospitals.

82 years old EX Army Major General Dr. Sathyapalan was suffering from severe Aortic valve narrowing due to surgical valve failure with miserable quality of life with repeated episodes of pulmonary edema. He was refused any treatment option by multiple centres because of his age, frailty and that it was a degenerated surgical valve now causing the problem. He approached Dr. Sai Satish, Senior Interventional Cardiologist, Apollo Hospitals Chennai for further treatment and underwent a Trans Catheter Aortic Valve Replacement procedure.

Explaining the case Dr. Sai Sathish, Senior Interventional Cardiologist, Apollo Hospitals Chennai said, “This was an extremely challenging case as the vessels in his leg were severely calcified and narrowed and no valve could be moved across them for replacement. Since the patient did not have any old records or information on the previously implanted surgical valve including its size etc, it was further challenging for us to replace the failed valve with a new one. His age and physical health again stood as a high risk making the procedure very demanding.”

He also added, “The procedure however went extremely smooth, the narrowed leg vessel was first dialated with multiple ballons gently until the space was big enough to accommodate the valve system, the valve was then moved across this and placed safely, inside the old degenerated surgical valve in under 20 mins.”

The patient was shifted back to the CCU fully conscious and then back to the normal ward the very same evening. He got discharged the second day post-surgery and cast his vote for the Lok Sabha Elections.

Dr. Sai Satish is an internationally renowned Senior Interventional Cardiologist from Apollo Hospitals, India. He is also a practicing interventional cardiologist & faculty in one of the world’s best TAVR training centres, the Gottsegen Institute of Cardiology in Budapest, Hungary.  A pioneer in the field, he holds the reputation for having performed the highest number of MitraClip implants in the subcontinent till date. As an international proctor for transcatheter aortic valve replacement, he established India’s first dedicated TAVR training center at Apollo Hospitals, Chennai. Doctors from more than 20 countries have benefitted from his hands-on training programmes in Hungary and other parts of Europe. He helped start TAVR programmes across the globe and trained Sri Lanka’s doctors, helping implant the country’s first few valves. Dr. Sai Satish has also been an active part of India’s maiden MitraClip journey, a revolutionary procedure treating leaking mitral valves in critically-ill, and inoperable heart failure patients giving them a second lease of life. It is a niche procedure that is so technically demanding that only 3 centres across India have been licensed to perform. Dr. Sai Satish has implanted up to 6 MitraClips back to back. His most recent milestone was a completely transcatheter mitral valve replacement by transeptal access for a surgically implanted mitral valve that failed after 14 years. Dr. Sai Satish’s team has performed thousands of procedures for diffusely diseased vessels, Left Mains (isolated/ bifurcation/trifurcation), Chronic Total Occlusions (100% blocked vessels) and heavily calcified vessels with rotablation for which also he is a proctor.Dr Sai Satish sits on several international advisory boards and chairs sessions on complex PCI and TAVR. He has performed several live case demonstrations and initiated many centers both in and outside India in rotablation as well. A trailblazer in minimally invasive cardiovascular therapies, he has been performing procedures at Apollo Hospitals Chennai since 2006. Dr. Sai Satish has a strong social streak as well, running several free camps across the country, championing preventive health because he firmly believes lifestyle monitoring is the best bet for future generations.

Suraasa Opens Its First Physical Centre in India after...