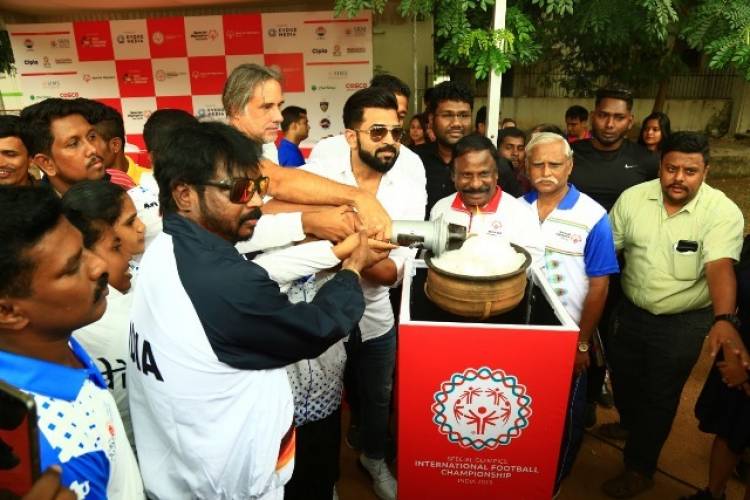 Chennai, India: The Special Olympics Torch, the “Flame of Hope” travelled from Singapore to Delhi to Chennai, to be relayed and lit as a symbol of hope and inclusion of intellectually differently-abled people around the world.

The Flame of Hope was relayed by Mr. Paul Devasagayam, Area Director of Special Olympics Bharat along with Special Olympic Bharat Athletes, and Mr. Cilvin Jayakumar, of Evoke Media, the Hosting Partner of the Special Olympics International Football Championship 2019, at Women’s Christian College (WCC), early on the morning of August 1st.

The Flame of Hope was then handed over to Actor Arun Vijay and Assistant Professor of the Women’s Christian College, Shruti Lal, who then proceeded to light it. The event had in presence SOIFC 2019 Youth Icon and international surfer, Vilassini Sundar, Managing Director of F45 Training, Deepti Akki, various delegates of Special Olympics Bharat & Special Olympics Tamil Nadu, special needs children and teachers of BalaVihar, and special needs students of WCC. The event was later graced by Special Olympics Goodwill Ambassdor Actor Varalakshmi Sarathkumar.

This lighting of the Flame of Hope served as an intimation of the Special Olympics International Football Championship 2019, which will happen in the city between August 3rd to 6th, at Nehru Indoor Stadium.

The Chalo app, a free mobile app that provides live tracking for buses was launched...