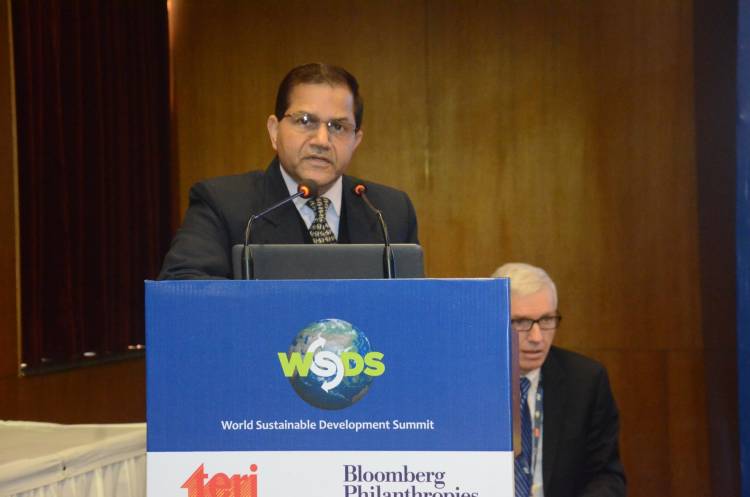 In a detailed analysis, The Energy &Resources Institute (TERI) has identified three key measures to significantly reduce the burden of air pollution at the national level: LPG penetration to the underprivileged, vehicle fleet modernisation, and agricultural residue management. The findings were presented at a thematic session on “Multi-level Actions to Strengthen NCAP” at the World Summit on Sustainable Development 2020, TERI’s flagship three-day event that got underway in New Delhi on January 29, 2020.
LPG penetration to the under-privileged
According to the analysis,a temporary intervention of INR 184/cylinder is required to push LPG refills in the under-privileged section. The cost for provisioning the above intervention to nearly 40 million beneficiaries of the Pradhan Mantri Ujjwala Yojanais INR 136.30billion, which is likely to ensure 8 refills,up from 0-3 refills, annually. TERI has suggested that this cost can be met through an additional pollution cess of INR 1 per litre on petrol and diesel. Similarly, an amount generated from an increase of INR 1 per standard cubic meter (SCM) of PNG, as a cess, can be leveraged to either cross-subsidize or expand the PNG network, thus releasing subsidised LPG from urban areas to be used in rural areas.
Vehicle fleet modernisation
While India is moving to BS-VI vehicle emission standards for new vehicles, the old fleet continues to pollute heavily. TERI’s analysis suggests that a cumulative reduction of 40% in PM and 43% in NOX emissions from commercial vehicles can be achieved during 2020-40 through a fleet modernisation scheme. Even a 50% rebate on excise duty of purchase of new commercial vehicles, will lead to positive cash flows, with an estimated NPV (net present value) of INR 1500 billion.
Agricultural residue management
About 30% of crop residue can be managed in-situ; however, the rest of the residue needs to be managed ex-situ through various possibilities like energy supply to cold storages, industries/brick kilns, power plants, or hotels/dhabas. Crop residue can be utilised in a decentralised manner as fuel for running biomass gasifier for various applications including electricity, agro-processing, and running decentralised cold storages. TERI is currently working on the cost benefit analysis to identify roadmap for effective crop residue management.
Speaking on the analysis, Dr. Anju Goel, Fellow, Centre for Environmental Studies at TERI, said pollution does not occur in silos and the cost-benefit analysis approach helps in decision making for air pollution control.
Commenting about Bloomberg Philanthropies’ efforts to address air pollution in India,Ailun Yang, Director of Global Air Pollution, Environment Program, Bloomberg Philanthropies, said, "Air pollution is a major challenge, not only in India, but across the globe. In progress that we've seen in other parts of the world, better evidence and data have been critical in driving success. In India, we're grateful to be partnering with TERI in these efforts to build better evidence on the major causes of air pollution, which will be instrumental in providing a solid and scalable foundation for future efforts."
Elaborating on CPCB’s ongoing efforts, Shri S. P. Singh Parihar, Chairman, Central Pollution Control Board, said, “We're using satellite-based products to look at the entire country for PM hotspots, especially in the Indo-Gangetic plains. On a priority basis, CPCB is looking at the issue of controlling regional concentration levels to address city-specific issues.”
Speaking about air quality management in India usinga multisectoral approach, Shri Satyendra Kumar, Deputy Secretary, Ministry of Environment, Forests and Climate Change (MoEFCC),said, “There has been a steady reduction in average annual concentration of PM2.5 by about 19% and in PM10 by about 25% between 2016 and 2019 in Delhi. All stakeholders, including the civil society, will work together to take effective measures for management of air quality."
Referring to the implementation of NCAP in Bihar, Dr Ashok Ghosh, Chairman, Bihar State Pollution Control Board,said, “We are expanding the air quality monitoring stations from 3 non-attainment cities to 11. We will be installing 22 more stations in the coming financial year. And, we are planning to install at least one monitoring station in all 38 districts in the state.”
Karthik Ganesan, Research Fellow, Council for Energy, Environment and Water, CEEW, suggested interventions in the residential sector for improving air quality. “Lack of awareness about impacts of severe air pollution is a major issue that needs attention. To help people adopt clean cooking options, we need to figure out a more sustainable mechanism other than providing subsidies on LPG cylinder,” he said.
At the session, Bloomberg Philanthropies and Vital Strategies launched“Accelerating City Progress on Clean Air: Innovation and Action Guide”, a guide to fast-tracking proven approaches and innovations. The publication provides a step-by-step approach for city governments, outlining four critical priority areas for action: Monitoring air quality; assessing emissions and sources; expanding data access and use; and engaging governments and partners to develop and implement action plans.
At the plenary session on Strengthening NCAP for Breathable Airat WSDS 2020, TERI will also release three discussion papers on emission standards for clean cooking fuel,fleet modernisation, power plants, agricultural residue management in India.
About TERI:
The Energy and Resources Institute (TERI) is an independent, multi-dimensional organisation, with capabilities in research, policy, consultancy and implementation. It has pioneered conversations and action in the energy, environment, climate change, and sustainability space for over four decades.
The institute's research and research-based solutions have had a transformative impact on industry and communities. Headquartered in New Delhi, it has regional centres and campuses in Gurugram, Bengaluru, Guwahati, Mumbai, Panaji, and Nainital, supported by a multidisciplinary team of scientists, sociologists, economists and engineers, and state-of-the-art infrastructure.

TANKER Foundation received the award for Best NGO in the Healthcare sector at the...

PM to address nation on Tuesday

The 21-day nationwide lockdown to curb the spread of coronavirus ends on Tuesday...