DIVINE, one of India’s foremost hip-hop acts at SRM University 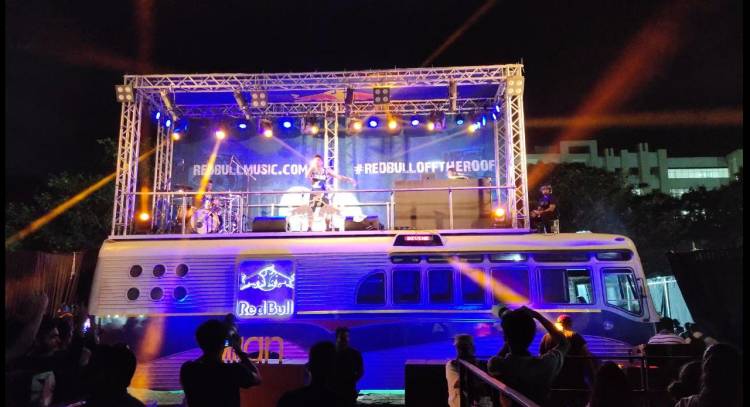 DIVINE, one of India’s foremost hip-hop acts, and Delhi-based trap/hip-hop DJ Sa took the stage at SRM University, Chennai, on Saturday evening with Red Bull Off The Roof, playing to over 6000 fans. A one-of-its-kind concert series, Red Bull Off The Roof features India’s most cutting-edge artists at venues across the country on India’s only tour bus and mobile gig venue.

One of the country’s best-known trap/hip-hop DJ’s, Sa is credited with being at the forefront of the revival of his genre in the country. Opening proceedings on Saturday evening, he had the crowd dancing from the get-go. In the last few years, DJ Sa has played at some of the leading music festivals around the country, opened for the likes of Snoop Dogg, Sean Kingston, Macklemore, Skrillex and DJ Snake, and represented the country at events such as ADE BEATS.

Up next was DIVINE, who took the stage amidst a roar from the thousands who had gathered to see him. As a rapper from the streets who was propelled to stardom with the single ‘Yeh Mera Bombay’ in 2013, DIVINE’s hard-hitting lyrics draw inspiration from his own life. Over the course of his set, he played some of his most popular tracks, including Farak, Paintra, One Side, Mere Gully Mein and Jungli Sher as well as more from his debut album, Kohinoor.
What is Red Bull Off The Roof?
Red Bull Off The Roof is a one-of-its-kind concert series featuring India’s most cutting-edge artists at venues across the country on India’s only tour bus and mobile gig venue.

Custom-built chassis-upwards in 2013, the tour bus is a fully functional touring bus with a roof that transforms into a fully equipped stage, capable of holding concerts at any location. Since it began its journey in October 2013, the tour bus has travelled over 70,000kms across the length and breadth of the country, to a host of venues and events, including some of the most renowned college and music festivals in India.

Through its specialised and diverse programming, the bus has served as a platform for over 100 unique artists, bringing new music to fans across the country. While some of the biggest independent acts in the country have called it home, the tour bus has also consistently brought newer artists to the fore. Over the years, memorable performances have included the likes of DIVINE, Raftaar, Benny Dayal, Amit Trivedi, Nucleya, Pentagram, Skyharbor, Raghu Dixit, Prateek Kuhad, KK, Thaikkudam Bridge, Indian Ocean and many more.

Ariel and Hello English spread the message of gender equality...

It’s heartening to note that the startup ecosystem saw over $10.5 billion of venture...