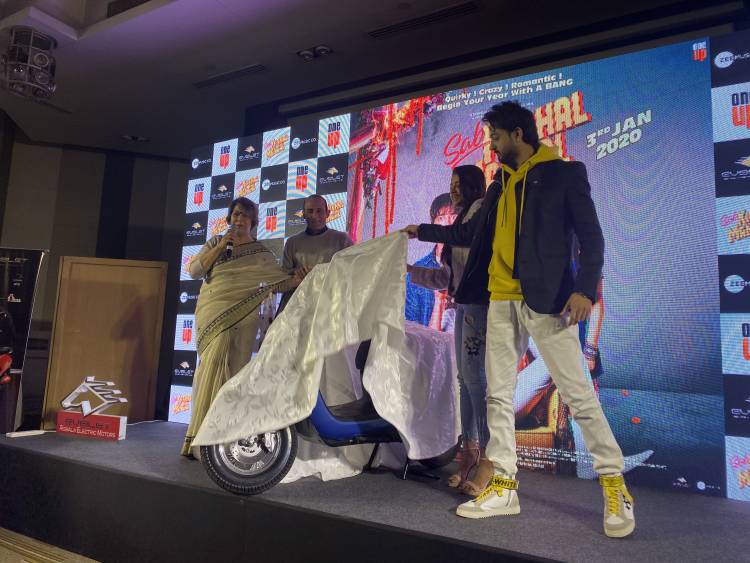 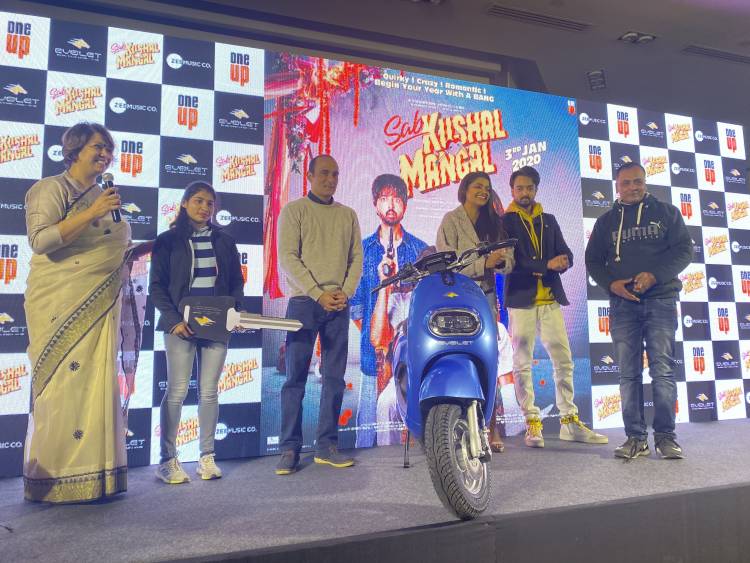 Company will plant one tree for every e-bike sold

·Initiative is called 'Let's Heal the Planet' and many celebrities have already got associated with it including Royalty, industrialists and Bollywood biggies.

Evolet India, a Gurugram based electric vehicle Startup, has taken a pledge to plant and maintain a tree for every e-scooter sold. At the promotion of Bollywood movie 'Sab Kushal Mangal' starring Akshaye Khanna, Sqn. Ldr. Prerana Chaturvedi, Executive Director & CEO - Evolet, said, "Programs like these help to reinforce the importance for switching to electric vehicles. This innovative mode of transportation will make the concept of Electric bikes even greener and more attractive by planting and maintaining trees with the support of our customers thereby engaging local communities as well to develop sustainable farming. The company has allocated 100 acres of land under its umbrella of Rissala Group situated at Karnal, Haryana for this noble initiative. To promote the growth of native ecosystems, Evolet is going ahead with plantation of indigenous trees and pledges to plant & nurture a lac of trees per year”.

The company has taken this decision as a part of CSR initiative and will be implemented immediately. Calling the initiative 'Let's heal the planet', Mr Nitin Manmohan, Bollywood Film Producer, said, "We all are aware of the harmful fumes coming out of the fossil fuel based vehicles and the noise pollution that they generate. E-scooters not only help curtail noise and air pollution but also are more pocket-friendly. Mobility is important but that does not mean that we should ignore the environment in which we are moving, This initiative by Evolet is a great step towards raising awareness which will highlight the significance of planting trees and drive every individual to take a step in the direction of developing a green, pollution free country."

Our country is facing several environmental problems that are on the rise and the receding green cover is one of the key aspect amplifying this cause. Promoting tree plantations is a basic but vital step towards the preservation of the environment which in turn will positively impact the health of citizens. The company is also of the view that switching over the e-scooters will also help contribute towards the overall health of the environment. "We are doing our bit and people from all walks of life have lent their hand in terms of time and ideas. Legendary Bollywood producers such as Mr Nitin Manmohan, Mr Pehlaj Nilahani, Ms Madhubha Darkar; industrialists such as Khaitan and Goenkas; and artists such as Jassi and Daler Mehndi; and many foreign dignitaries, royalties have joined hands to make this a world level movement," adds Sqn. Ldr. Prerana.

Evolet, a part of Rissala Electric Motors Pvt Ltd has 13 dealerships operational so far across the country within three months of its launch and is in final talks with partners to add 15 more dealerships by December 2019. It aims for 200 dealerships pan-India within first year of launch, targeting sales of 2000 units per dealer per annum along with institutional sales and corporate sales to widen its domestic base. Evolet want to send out a message that companies have a duty to safeguard the environment. Trees act as the lungs of the environment and people’s health is a collective responsibility. In this initiative of Evolet to stop air and noise pollution, the company is getting support from people from all walks of life.

Recently, the company set up its distributorship and dealership network for its range of electric scooters and motorcycles models in Maharashtra region, after opening authorized outlets at Haryana, Punjab, Uttar Pradesh within 3 months of its launch. The key cities identified for dealerships and distributorship in Maharashtra includes Mumbai, Pune, Nasik, Nagpur, Aurangabad, Satara, Kohlapur and Jalgaon; the plan has been formalise for opening around 20 dealerships by March 2020 with target sales of around 150 units per month per dealer.

Brand Evolet, along with its range of models were recently launched at Delhi on 4th September, 2019 with subsequent opening up of its flagship showroom at Gurugram. The Prices of its models; Polo, Pony, Derby (scooters), Falcon, Hawk, Raptor (motorcycles) range between Rs 44,000 to Rs 1,40,000; the Warrior (ATV) is priced at Rs 1,50,000 and the buses range between Rs 1.25 Cr to Rs 1.75 Cr. These models are fully equipped with advanced features such as IOT enabled mob app; giving riders information on battery health, charging status, and security tracking on the phone using GPS besides reliability and mileage. Efficient after sales service, quick availability of spare parts, and light weight swappable batteries (available in Lithium ion) are our topmost strategies for ensuring high customer satisfaction.

Evolet is a highly advanced enterprise specializing in vehicle designing and R&D with manpower strength of around 200 employees. It is making investments in phased manner and have allocated budget of approx. INR 150 crores for its two wheeler division and INR 300 crores for the E-Bus division to support its pan India operations and production.

Evolet manufacturing facilities are situated in Haryana, Hyderabad and Chennai offering 13 products in various segments. Its Bilaspur, Haryana facility has a built-up area of 1.4 lac sq.ft with manufacturing capacity of 3.5 lakh two-wheelers per annum. The Hyderabad and Chennai facility too are fully-equipped to produce 1500 buses per annum and is spread in an area of over 2 lakh sq. ft. Chennai based AMS Electric Mobility Pvt. Ltd. is the chief engineering and design house of our electric buses and holds ARAI certification and homologation under its name. The electric buses are being manufactured jointly by AMS Electric Mobility and Rissala Electric Motors for catering to the requirements of various government agencies and corporates.

The Star Novel Coronavirus policy will provide a lump sum payment to any insured...

Diesel price on Saturday fell below Rs 73 a litre mark while petrol saw a second...