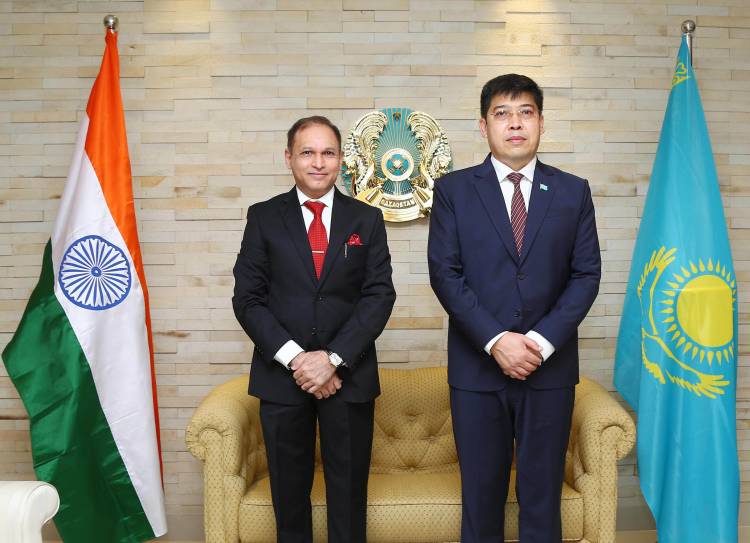 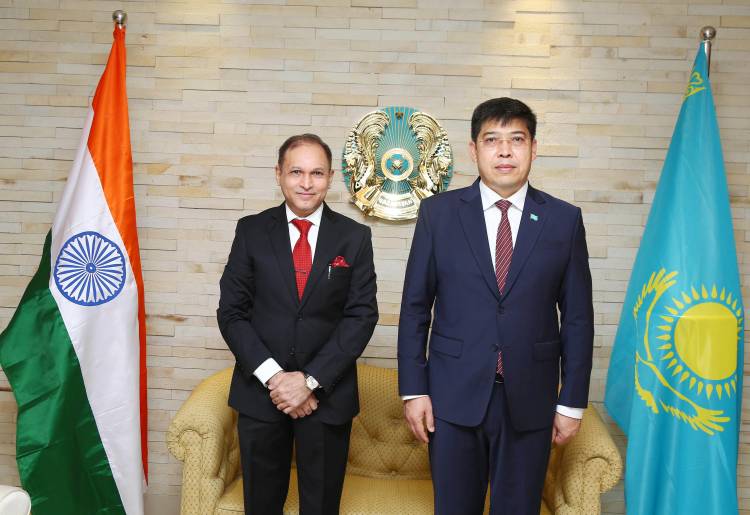 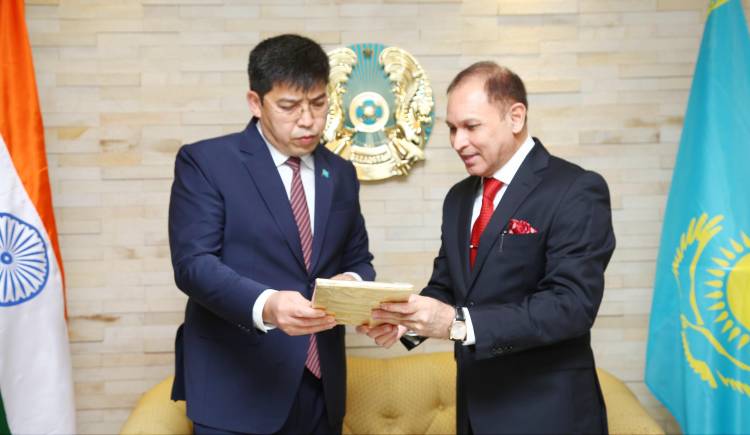 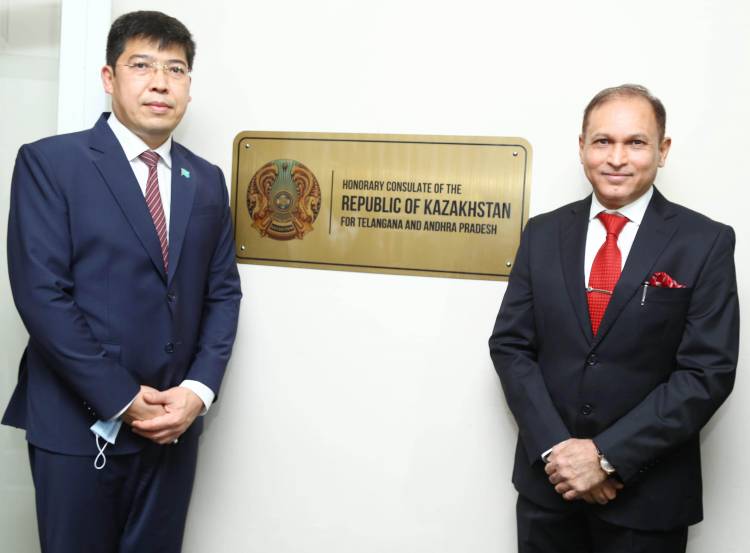 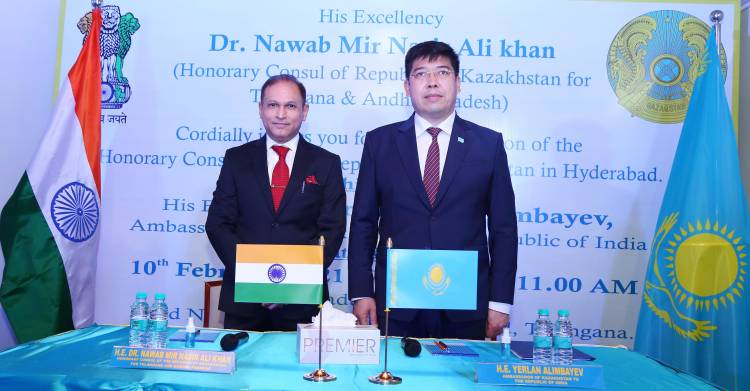 Honorary Consulate of Kazakhstan opened in the

Hyderabad, February 10, 2021: Ambassador Yerlan Alimbayev took part in the opening ceremony of the Honorary Consulate of Kazakhstan in one of the largest cities of India– Hyderabad, which is headed by the well-known Indian businessman and philanthropist Mr. Mir Nasir Ali Khan.

In his speech at the solemn event, the Kazakh diplomat stressed the symbolism of expanding the circle of Kazakh friends in India in the year of the 30thAnniversary of Kazakhstan's Independence and on the eve of the 30th Anniversary of the establishment of diplomatic relations between the two countries.

Ambassador Yerlan Alimbayev noted that Mr. Mir Nasir Ali Khan provided a great support to the Embassy and citizens of Kazakhstan during the pandemic and expressed confidence that the opening of the Honorary Consulate will make a significant contribution to deepening of bilateral trade, economic and cultural ties between Kazakhstan and India.

On the same day, Ambassador Alimbayev opened the Hall of Kazakh Literature in one of the most prestigious libraries in Hyderabad at the «NizamClubIndia» -oldest clubs founded in 1884, managed according to the Western model. Books and printed publications about Kazakhstan, culture and history of our country in English and Hindi are displayed in the Hall.

Speaking on the occasion, the Kazakh Ambassador Yerlan Alimbayev informed the local audience with the main achievements of his country during the years of Independence, latest political reforms, as well as the huge role and contribution of the First President Elbasy Nursultan Nazarbayev in the formation and strengthening of the Kazakh-Indian relations. He said, for the first time in our diplomatic history Dr. Nawab Mir Nasir Ali Khan, has been appointed as the Honorary Consul of Republic of Kazakhstan for Telangana & Andhra Pradesh, for the fourth consecutive years I am confident that the opening of this Consulate in Hyderabad will lead to significant contribution to deepen our relationship not just in economy and trade, but cultural relations too. In a fortnights time we will celebrate 29 years of establishing diplomatic relationship with India. Kazakhstan and India established a strategic partnership in 2009. Kazakhstan is the largest trade partner of India in Central Asia, last year we did trade turnover US $ 2.4 bn. Rapid economic growth in both countries is encouraging further cooperation. Kazakhstan has very friendly investment climate, we have introduced some legislative changes to render more support to investors. Investors can enter into investment agreement with the Government without approval from the parliament. Kazakhstan has been receiving investments in the areas of pharmaceuticals, agriculture, food and medical device production. From Hyderabad, we already have Dr Reddy Lab’s office in Kazakhstan and more than a thousand pharma related companies from India are there. This office in Telangana should help us to give impetus to pharma and IT businesses. We have specific offers and incentives for pharma and IT industries, and we will extend the same. There are several projects in pipeline which are in a standstill due to COVID, the inter-governmental commissions of India and Kazakhstan is scheduled to meet in February end, and we will take them forward during that meeting. The President of Kazakhstan is expected to visit India in the second half of this year and is scheduled to visit New Delhi and Mumbai, we will also explore his visit to Hyderabad in consultation with his office. Kazakhstan is the biggest supplier of uranium to India, in the last ten years we supplied 9000 tons of uranium and the new contract is under consideration, probably before the President’s visit we will have this contract signed. Strategic and promising area is mining for Indian businesses to explore. We invite businessmen from Telangana and Andhra Pradesh to visit Kazakhstan.

Speaking on the occasion Dr. Nawab Mir Nasir Ali Khan, Honorary Consul of Republic of Kazakhstan for Telangana & Andhra Pradesh, said, there are lots of common interests between India and Kazakhstan. The Honorary Consulate of the Republic of Kazakhstan established in Hyderabad, will work towards bridging and strengthening the people-to-people and business relationships between Kazakhstan and the states of Telangana and Andhra Pradesh. The Consulate will enable to enhance exports and imports from and to Telangana and Andhra Pradesh. Kazakhstan currently has its Embassy at New Delhi and Consulates at Mumbai, Chennai, Kolkata and Ahmedabad. The current trade between the two countries is focused on mostly uranium & oil imports of over $2 bn from Kazakhstan and India’s exports are in the range of $ 300 bn, most of which is of pharmaceuticals and IT services. There is tremendous potential to enhance trade between Kazakhstan and the combined Telugu states. Kazakhstan is on a developmental spree, which is an opportunity to promote investments in that country, our contractors and industrialists can benefit immensely. There is opportunity to grow tourism both ways. Also, Hyderabad being a medical hub presents tremendous potential for medical tourism. Kazakhstan is one of the biggest pharmaceutical markets including its supplies to its neighboring countries, that’s a great trade opportunity between both the countries. Kazakhstan is destination for students aspiring for quality medical education, this Consulate can facilitate more students to avail the opportunity. Our IT companies can pitch in to establish and develop IT parks in Kazakhstan. Exporting fresh agriculture produce and food products from here is a real possibility. We will be taking a trade delegation from Telangana and Andhra Pradesh to Kazakhstan and thereby enhance business opportunities. Film industry producers are keen to seriously look at Kazakhstan for their shootings, as it is country with locations of scenic beauty. Destination weddings can be a hit, as Kazakhstan has excellent infrastructure. More than 50% of space launches globally happens from Kazakhstan, including the recent NASA space launch. Kazakhstan has several firsts to its credit, apples and tulips are originally from Kazakhstan. India and Kazakhstan share several commonalities, especially the foods like pulao, samosa, some deserts are from that country. The literacy rate is very high at 99%, with people being very progressive. It’s a mineral rich country with oil, coal, uranium, India imports 80% of its uranium form Kazakhstan. I have requested His Excellency to invite the President of Kazakhstan to Hyderabad, during his visit to India, that would be a proud occasion for Telangana and we will be honored to host him.

In a significant milestone in its journey in India, .......

Unravel the Master chef in you on this Women's Day

This Women's Day it’s time to gift yourself a Master Chef title! Join us and be...